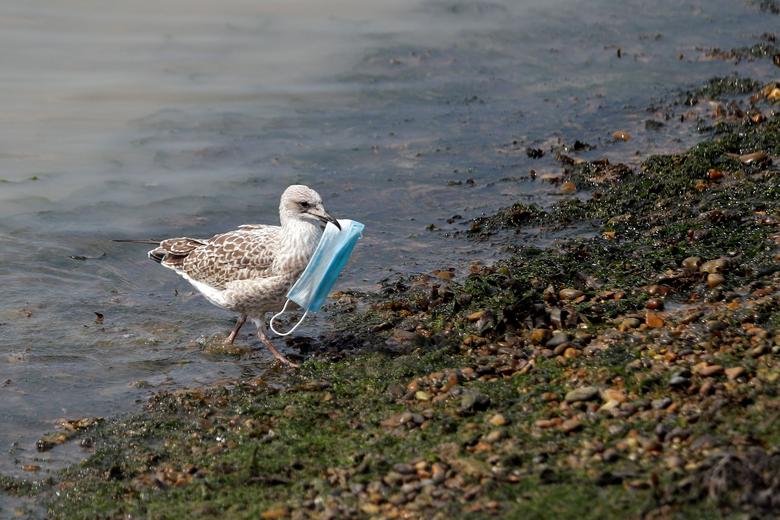 1) President Donald Trump is being removed by a member of the secret service from the Brady Briefing Room of the White House in Washington, DC, on Aug. 10, 2020. Photo: BRENDAN SMIALOWSKI, AFP via Getty Images. Another look. Photo Reuters

2) President Donald Trump returns to a news conference in the James Brady Press Briefing Room after he briefly left because of a security incident outside the fence of the White House, Monday, Aug. 10, 2020, in Washington. Photo: Andrew Harnik, AP

5) A combination of multiple long-exposure photographs shows satellites and meteors crossing a starry sky over a chapel near the town of Herrnleis, Austria. The Perseid meteor shower peaks in mid-August each year, when the Earth passes through the debris and dust of the Swift-Tuttle comet. Photo: EPA

6) Soldiers of the Brazilian Armed Forces are seen during the disinfection procedures of the Christ The Redeemer statue at the Corcovado mountain prior to the opening of the touristic attraction in Rio de Janeiro, Brazil, on August 13, 2020. Photo: Getty Images

7) Blanca Ortiz, 84, celebrates after learning she will be dismissed from the Eurnekian Ezeiza Hospital, on the outskirts of Buenos Aires, Argentina, Aug. 13, 2020, several weeks after being admitted with COVID-19. Photo: AP

9) In the Gaza Strip a clown hired by a local kindergarten instructs children how to wear a face mask during an awareness session about coronavirus, as education facilities reopened for the new academic year. Photograph: Mohammed Abed/AFP/Getty Images

11) Kindergarteners wear masks as they play in screened-in areas at the Wat Khlong Toey School on Aug. 10 in Bangkok. Although Thailand is now allowing schools throughout the country to further relax safety measures, the Wat Khlong Toey school has chosen to continue strict social distancing to ensure the safety of their students and teachers. Photo: Getty Images

12) Herriman cheerleaders carry the American flag before the start of a high school football game against Davis, Aug. 13, 2020, in Herriman, Utah. Photo: AP

13) The newly renovated Mayflower II, a replica of the original ship that sailed from England in 1620, sails back to its berth in Plymouth, Massachusetts.  Photo: Reuters

14) Jorge Enrique Salgado poses for a photo beside a replica of the Eiffel Tower he built on the roof of his home in Havana, Cuba, on August 7, 2020.  Photo: Alexandre Meneghini / Reuters

15) Johne Riley walks down Main Street while showing off his chest, painted with a portrait of President Donald Trump, during the 80th Annual Sturgis Motorcycle Rally on Aug. 7 in Sturgis, S.D.  Thousands of bikers poured into the small city despite concerns among residents that the 10-day gathering could spread the coronavirus. Photo: Getty Images

17) Around 300 dolphins are seen traveling across the ocean near Dana Point, California. The mammals move faster while porpoising out of the water since there is less resistance in air than in water. It’s not clear why pods of dolphins stampede. Photograph: Stacie Fox/AP

18) A seal took several tourists by surprise by hitching a ride on their stand-up boards at the beach in Weymouth, England, on August 13, 2020. The seal, known by many locals as Sammy, has become a regular sight in Dorset with volunteers checking on him. The animals are usually known for being elusive, but Sammy is known to approach people on the beach and catch the occasional ride on a paddle board.  Photo: Finnbarr Webster / Getty