Today’s read is from Todd Starnes,  the host of Fox News & Commentary, heard on nearly 500 radio stations. He’s the author of the new book, “The Deplorables’ Guide to Making America Great Again.” The teaser…

The arrogance, the dismissiveness, the smug cackling, the accents. If Donald Trump wins re-election this year, I’ll remember this brief CNN segment late one Saturday night in January as the perfect encapsulation for why it happened.

Honestly, folks – I’d rather be a gun-toting, Bible-clinging, illiterate hillbilly than a perpetually-offended, pajama boy snowflake.

January 26 – February 1 is National School Choice Week.  That means a week’s worth of celebration.

There are many reasons to celebrate. According to the Wisconsin Institute for Law and Liberty the expansion of school choice in Wisconsin could result in $3.2 billion in new economic benefits to the state over the next two decades

Today’s read is from the website The Officer Next Door.

With a deep respect for what police officers do for this country and having done the job for over a decade, this blog was started with the goal of bridging the “gap” between police officers and the rest of society. We hope to offer a point of view through the eyes of a police officer about incidents that happen and police related topics in general. Most police officers can’t voice their opinions publicly due to department rules or policies, that is where we come in. For those who have never walked the streets wearing a bullet proof vest and a badge, it’s impossible to know what these men and women go through on a daily basis.

Read “If I could forget what my eyes have seen.”

The greatest pro-life president ever?

The March for Life is the true women’s march

After Years of Tumors, Growing a Baby Instead

We travel to Ann Arbor.

Lizzo won a Grammy Award Sunday night (she was nominated for eight).

Who’s Lizzo, you ask? She’s a very popular singer that’s only been recording for the past year or so. Oh, and she’s a large woman.

That’s her onstage at Milwaukee’s Summerfest in 2019. Lizzo made national news after she accused a Summerfest security guard of racism.

More national attention came earlier this month, again, not because of her music.

Celebrity fitness trainer Jillian Michaels (above) questioned why Lizzo fans are “celebrating her body” and not her songs. “Why are we celebrating her body? Why does it matter? Why aren’t we celebrating her music?” asked the 45-year-old author of “Slim for Life.””It isn’t going to be awesome if she gets diabetes,” Michaels continued. “I love her music. My kid loves her music. But there’s never a moment where I’m like, ‘And I’m so glad that she’s overweight.'”Naturally, reporters and social media blasted Michaels (white woman criticizing black woman).

“One of the stars we were most excited to see on the red carpet at this year’s Grammys? Lizzo — who certainly didn’t disappoint in this angelic Atelier Versace confection.”

“The white gown featured a slinky silhouette embroidered with sparkling crystals and was topped with a white fur stole. Check out the way Lizzo’s fur stole included stunning crystal-covered bracelets to keep it in place. We loved that extra sparkly detail, and the way she added some more simple diamond bracelets to the mix.

“Those nails! To complete her heavenly white Versace ensemble, Lizzo’s nails included silver embellishments and diamonds dripping from each nail.”

Hmm. These are the same so-called “fashion experts” that toss arrows at…

6) Goodnight everyone, and have a prize of a weekend!

A January survey of more than 1,200 people finds that most (60%) Americans say they are planning to watch the Super Bowl on February 2.  The survey was conducted by You Gov,  an international research data and analytics group. And what will Super Bowl watchers be snacking on?

Let’s review the top ten most popular, starting with #10.

Naturally there all kinds of polls and surveys and studies about what football fans love to devour on Super Bowl Sunday. However there appears to be some level of consistency when it comes to favorites: Chili, nachos, subs, wings, pizza, chips, dip, salsa, guacamole, etc.

Now comes a new study that breaks down which Super Bowl food is the most popular in each state. Bid on Equipment performed the research. Data  was collected from Google search volume and a 1,200-person national survey. The average respondent age was 37.

The survey found that across America…

The seven layer dip came in just ahead of…

The buffalo chicken dip in popularity.

So, what is, according to this survey, the most popular Super Bowl Food in the badger State?

Not to be confused with…

The ones you jab toothpicks into.

Nothing wrong with these weenies. They’re Super Bowl favorites in eleven states, not just here. I love ’em. And granted, they’re cheap and easy.

But I can’t imagine hearty Wisconsinites dreaming on their way to a party, “Gee, I sure hope they have those little weenies and sauce!”

I think this survey is, well…junk.

You tell me. The Grammy Awards will be presented tonight. We’ve done this with the Oscars but never with the Grammy Awards. Let’s look at the Grammy winners for Record of the Year starting with 1960 and work our way up to the present by checking every five years. 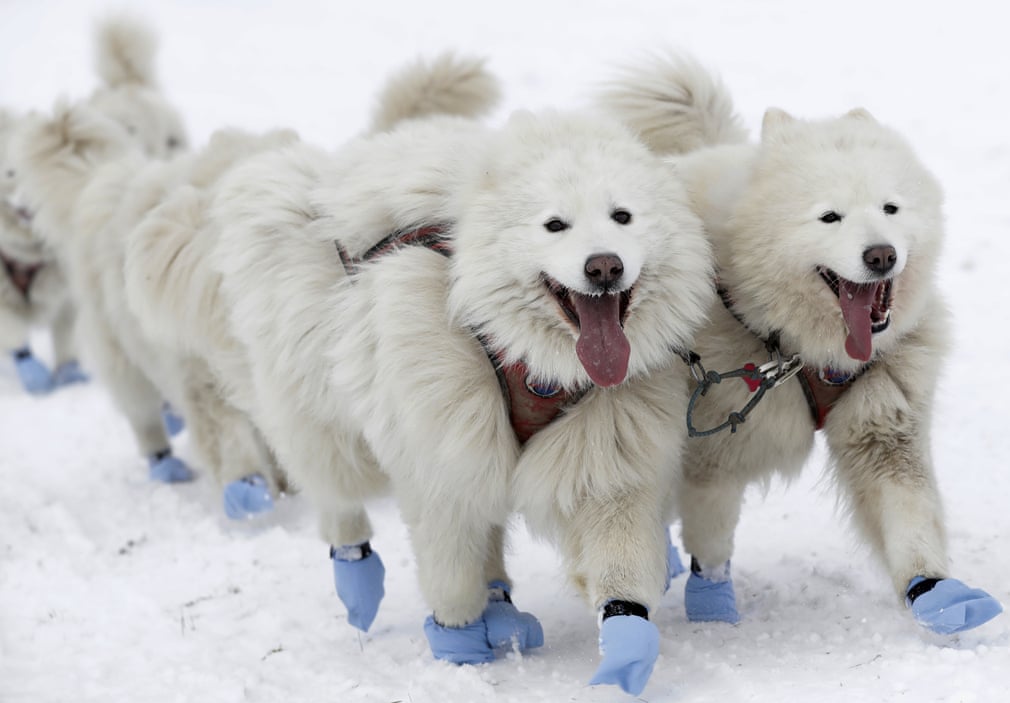 2) A militia member brandishes a Barrett .50 caliber sniper rifle at the start of a rally by gun rights advocates and militia members near Virginia’s Capitol, in Richmond, Virginia. Photo: REUTERS/Jonathan Drake

5) Pro-life demonstrators listen to US President Donald Trump as he speaks at the 47th annual “March for Life” in Washington, DC, on January 24, 2020. – Trump is the first US president to address in person the country’s biggest annual gathering of anti-abortion campaigners.  (Photo by OLIVIER DOULIERY/AFP via Getty Images)

10) Members of a health team get ready to apply health measures and procedures against a new virus outbreak, after passengers landed at Rome’s Fiumicino airport on a southern airlines flight from Wuhan, China. Photo: AFP

11) A woman sits on a broken bed with her family dog on the floor of a burnt-out house as people search for their belongings after a fire broke out in a slum in Karachi, Pakistan, Jan. 22, 2020. Photo: Reuters

13) Former Wisconsin Lt. Gov. Rebecca Kleefisch visits with attendees of a meeting of the Republican Women of Southeast Wisconsin at a home in Kenosha on Tuesday. During the meeting, Kleefisch indicated she is likely to pursue public office in the coming years, but did not indicate specifically what position she might run for. Former Gov. Scott Walker has publicly stated that he hopes she replaces Gov. Tony Evers after the 2022 election. Photo: ADAM ROGAN, Racine  Journal Times

16) No this is not Lake Michigan. Muddy water from the Yarkon River flows into the Mediterranean Sea in Tel Aviv, Israel, on January 22, 2020. Photo: Oded Balilty / AP

18) Itza, one of 17 rescued tigers and lions from Guatemala circuses, is released at the Animal Defenders International Wildlife Sanctuary in Winburg, South Africa. Another look. Photos: AP and Reuters

20) A horseman jumps over a bonfire in the village of San Bartolomé de Pinares in the province of Avila in central Spain, during the opening of the traditional religious Las Luminarias festival in honor of San Antonio Abad (Saint Anthony), patron saint of animals, on January 16, 2020.  Photo: Pierre-Philippe Marcou / AFP / Getty

21) A bunny is held by its owner during celebrations on the day of Spain’s patron saint of animals, Saint Anthony, outside San Anton Church in Madrid, Spain, on January 17, 2020. Photo: Susana Vera / Reuters

22) A lemur perches on the shoulder of an Anadolu Agency cameraman who is shooting a video of the ring-tailed lemurs at Wildlife Park in Izmir, Turkey, on January 17, 2020. Photo: Halil Fidan / Anadolu Agency / Getty

23) A newborn giant anteater (Myrmecophaga tridactyla) sticks out his tongue while sitting on his mother, Zenobia, in their enclosure at the zoo in Dortmund, Germany, on January 22, 2020.  Photo: Ina Fassbender / AFP / Getty

25) Milwaukee Bucks guard Pat Connaughton throws down a dunk against the Charlotte Hornets in the first NBA game ever played in Paris. Photo: Associated Press

26) Bucks forward Giannis Antetokounmpo puts down a one-handed slam as Cody Zeller of the Hornets looks on during the game in Paris. The Bucks won, 116-103. Photo: JULIEN DE ROSA, European Press Agency

27) People watch with little emotion as the 49ers roll over the Packers in the first half of the NFC Championship Game last Sunday.  Photo by Michael Sears / Milwaukee Journal Sentinel

28) Paige Hoeffert (from left) of Wauwatosa, Katie Leinenkugel of Milwaukee and Meredith Settler of Wauwatosa can’t believe it as the 49ers score in the first half yet again as they watch the Packers play the San Francisco 49ers on TV at Red Star on North Old World 3rd Street in Milwaukee. Photo by Michael Sears / Milwaukee Journal Sentinel.

29) A Packers fan watches stunned as the 49ers score again in a 37-20 rout. Photo by Michael Sears / Milwaukee Journal Sentinel