This week’s oldie features three (3) talented women. One is 74 years old. Another is 76. And the last turns 80 tomorrow (Saturday).

Let’s begin with the 76-year old (who has a birthday next week). This vocalist could do  folk, rock, blues, bluegrass, and jazz. She had her first and most memorable hit in the spring of 1974 that peaked at #6.

“I still do enjoy singing it. And you know why? Because number one, it was a very hip-ly written song. A lot of the jazz artists have covered it because it’s very well constructed. Imagine my plight if my big hit had been ‘Wild Thing’ by the Troggs, a really dumb three-chord song. But it’s a song that’s so well constructed that an artist can improvise on it night after night. So that’s reason number one, it’s a cool song.

“Reason number two is I love the look of the faces of the audience when the band strikes that number up, when the band goes into the intro of that number. Because apparently, from all the stories that have been told to me when I meet my fans after the show to sign my CD, that song was the soundtrack to many a love-and-lust affair, and if I had been writing down all the stories of what people tell me they were doing or were inspired to do because of that song, or as that song was playing, I could have written quite the little x-rated book. So when I start that song, people’s faces light up and I see very happy, maybe slightly x-rated memories flitting across their faces. And so that’s worth more than any Grammy nomination or award – to hear first hand from your fans, from hundreds and hundreds of fans, how a piece of music I didn’t even write, but that I selected and recorded and just put out there in the airwaves, just had such a happy impact on people’s lives. What a gift is that?”

Let’s slip off to a sand dune, real soon
And kick up a little dust

Come on, Cactus is our friend
He’ll point out the way
Come on, till the evening ends
‘Til the evening ends
You don’t have to answer
There’s no need to speak
I’ll be your belly dancer, prancer
And you can be my sheik

Here’s a short clip. See if you remember.

The following year in March Muldaur scored a Top 20 recording written by the famous duo of Jerry Leiber and Mike Stoller, a remake of a song done originally by Peggy Lee.

OK, that’s one of the three women. The other two performed together on a variety show not long after Muldaur hit paydirt in 1975.

“It was such a panic to get Cher done every week. While I was doing that show, I was also doing The Carol Burnett Show in the next studio. We would start Monday like a race, and by Friday night everything was over. I had the best time.

“That was funny (the Cher/Raquel duet) because you had two very different bodies, and yet they looked great standing next to each other. Raquel was much curvier than Cher—and I think she was a little nervous. She said, ‘Oh my god, is this too much? Do I look cheap?’ And I said, ‘No, darling, you look gorgeous’.” 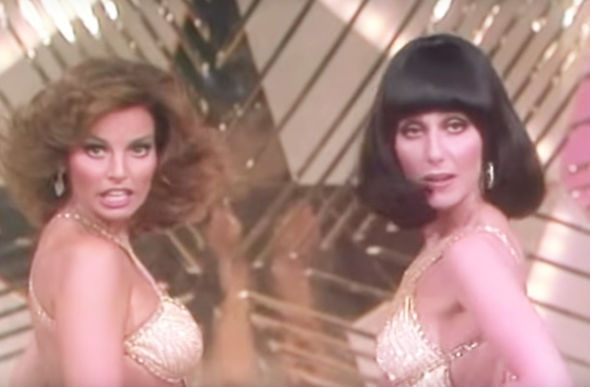