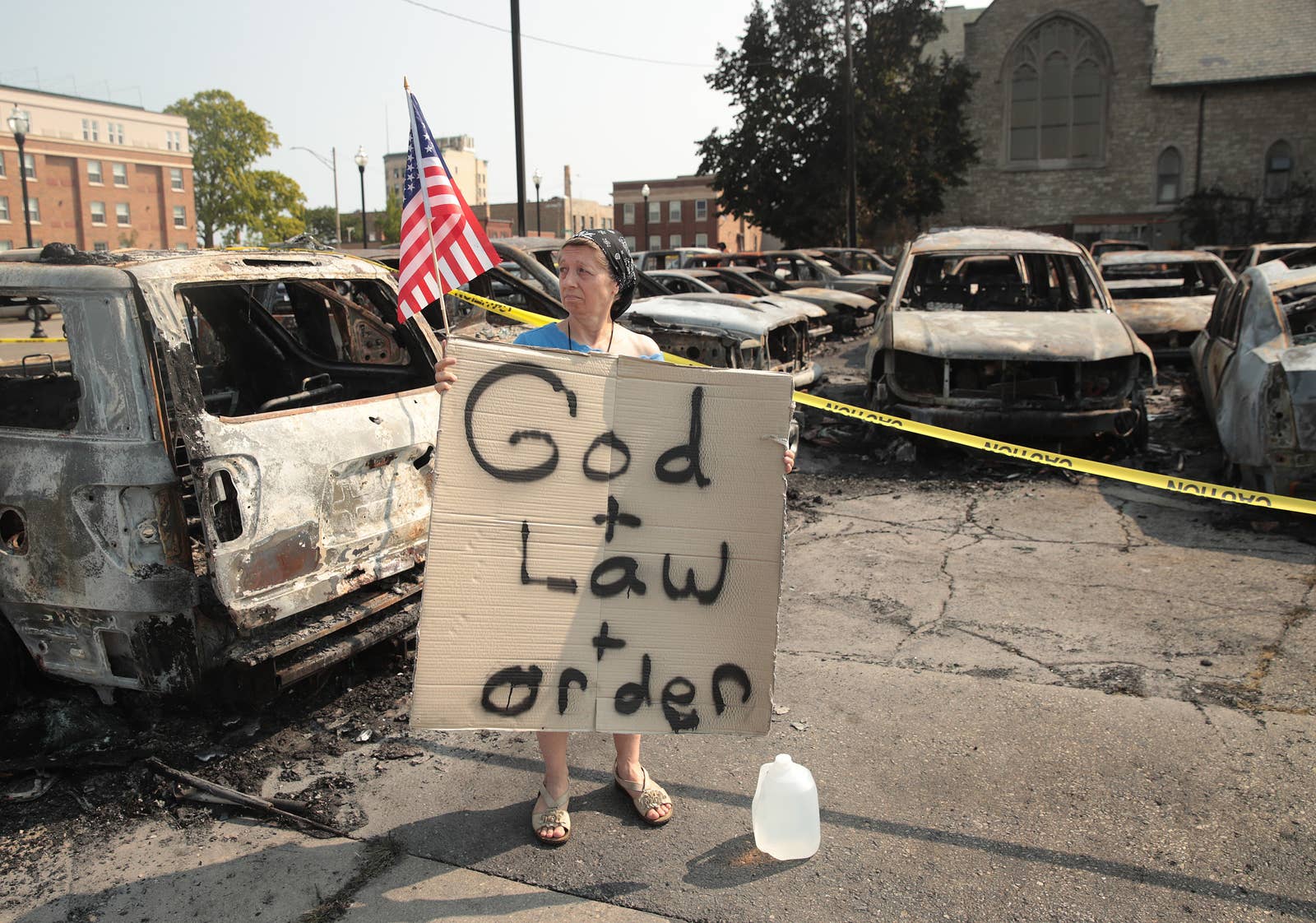 1) A law enforcement officer holds a weapon as he stands in the hatch of an armored vehicle as people protest outside the Kenosha County Courthouse, August 25. Photo: REUTERS/Stephen Maturen

3) The carcasses of the cars burned by protesters the previous night during a demonstration against the shooting of Jacob Blake are seen on a used-cars lot in Kenosha, Wisconsin, Aug. 26, 2020. Photo: AFP

4) A flag flies over a department-of-corrections building ablaze during protests on August 24, 2020, in Kenosha, Wisconsin, sparked by the shooting of Jacob Blake by a Kenosha police officer a day earlier. Photo: Morry Gash / AP

5) Flares go off in front of a Kenosha Country Sheriff vehicle as demonstrators take part in a protest following the police shooting of Jacob Blake, a Black man, in Kenosha, Wisconsin, Aug. 25, 2020. Photo: Reuters

6) A protester lights a cigarette on a garbage truck that was set on fire during a demonstration Aug. 24, 2020, in Kenosha, Wis., sparked by the shooting of Jacob Blake by a Kenosha Police officer a day earlier. Photo: AP

8) A woman hands flowers to a member of the Wisconsin National Guard standing by as people gather for a vigil, following the police shooting of Jacob Blake, a Black man, in Kenosha, Wisconsin, August 28, 2020. Photo: REUTERS/Brendan McDermid

9) After the WNBA’s announcement of the postponed games for the evening, the Washington Mystics wear white T-shirts with seven bullet holes on the back in protest over the shooting of Jacob Blake. Photograph: Julio Aguilar/Getty Images

10) Ann Dorn gave one of the most genuinely moving speeches of the convention. She spoke about the death of her husband, David Dorn, a security guard and retired police captain who was killed in June amid looting in St. Louis. She told of how the police chief came to her door at 4 a.m. to give her the news. “I relive that horror in my mind every single day,” she said. “My hope is that having you relive it with me now will help shake this country from the nightmare we are witnessing in our cities and bring about positive, peaceful change.” Photo: 2020 Republican National Convention/Handout via REUTERS

11) Dana White, president of the Ultimate Fighting Championship, gave one of the more extensive discussions of Trump’s response to the pandemic, saying he had served on a White House task force on reopening. “It was clear: his highest priority was always the health and safety of everyone in our country,” White said. White bragged that the UFC was the first sport to restart, and said the lessons learned would help reopen schools. “Make no mistake about it. We still have a long way to go. And that is why we need a leader, with President Trump’s unique attributes, at this critical time.” Photo: 2020 Republican National Convention/Handout via REUTERS

12) Former New York Mayor and Trump personal attorney Rudy Giuliani is seen in a video on the South Lawn of the White House August 27: “These continuous riots in Democratic cities, gives you a good view of the future under Biden.” Photo: REUTERS/Carlos Barria

14) Carl Mueller holds up a photo of his daughter Kayla Mueller, who was killed by ISIS, while speaking with his wife Marsha, August 27, at the 2020 Republican National Convention. Photo: Handout via REUTERS

16) White House Press Secretary Kayleigh McEnany delivers a pre-recorded address August 26. McEnany offered a deeply personal story about her decision to undergo a preventative mastectomy, describing how Trump called her afterward — a gesture she characterized as supporting “an American with a pre-existing condition.” In fact, the Trump administration will try this autumn to persuade the Supreme Court to invalidate the Obama-era Affordable Care Act, which bars health insurers from canceling coverage for people with pre-existing conditions. Photo: REUTERS/Tom Brenner

17) “You can kneel before God but stand for our flag,” said Madison Cawthorn, a paralyzed car-crash survivor and North Carolina politician August 26, at the 2020 Republican National Convention. Photo: Handout via REUTERS

19) Nicholas Sandmann, the former high school teenager from Kentucky who gained national attention for staring at a Native American activist in front of the Lincoln Memorial with a ‘MAGA’ hat on, slammed the media on the second night of the RNC for what he said was its promotion of an “anti-Christian” and “anti-Donald Trump” narrative. “In November, I believe this country must unite around a president who calls the media out and refuses to allow them to create a narrative instead of reporting the facts,” Sandmann said. Photo: Handout via REUTERS

20) Kimberly Guilfoyle, the National Chair of the Trump Victory Finance Committee and girlfriend of Donald Trump Jr., delivers a pre-recorded speech, August 24. “They want to destroy this country, and everything that we have fought for and hold dear,” she said of Democrats. “They want to steal your liberty, your freedom. They want to control what you see and think, and believe, so they can control how you live!” Photo: REUTERS/Kevin Lamarque

21) A TV monitor shows Donald Trump Jr. as he delivers a pre-recorded speech from the Mellon Auditorium in Washington, August 24, 2020. The president’s oldest son said, “Joe Biden and the radical left are now coming for our freedom of speech. They want to bully us into submission. If they get their way, it will no longer be the silent majority. It will be the silenced majority. This has to stop. Freedom of expression used to be a liberal value. At least before the radical left took over. Now the Republican Party is the home of free speech, the place where anyone from any background can speak their mind.” Photo: REUTERS/Kevin Lamarque

22) Former U.S. Ambassador to the United Nations Nikki Haley speaks in a live address broadcast from the Mellon Auditorium in Washington, August 24. Haley, a child of Indian immigrants, attempted to draw a contrast with what she called Democratic support of “riot and rage.” “I was a brown girl in a black and white world,” she said. “We faced discrimination and hardship. But my parents never gave in to grievance and hate.” Photo: REUTERS/Kevin Lamarque

23) Former NFL player Herschel Walker speaks by video feed August 24. “It hurts my soul to hear the terrible names that people call Donald. The worst one is ‘racist.’ I take it as a personal insult that people would think I would have a 37-year friendship with a racist,” he said. “He keeps right on fighting to improve the lives of Black Americans and all Americans. He works night and day. He never stops. He leaves nothing on the field.” Photo: Handout via REUTERS

25) First Lady Melania Trump is hugged and kissed by President Donald Trump after delivering her live address from the Rose Garden of the White House in Washington, August 25, 2020. Melania offered sympathy for victims of the coronavirus pandemic and a plea for racial understanding in a convention speech aimed directly at the women voters who have abandoned President Trump. The speech’s warm tone was out of step with a Republican gathering that featured harsh rhetoric about Democratic challenger Joe Biden and sometimes apocalyptic warnings about the dangers of Democratic governance. Photo: REUTERS/Kevin Lamarque

26) First Lady Melania Trump delivers her live address to the largely virtual 2020 Republican National Convention from the Rose Garden of the White House, as seen from the roof of the West Wing, in Washington, D.C., on August 25, 2020. Photo: Kevin Lamarque / Reuters

28) President Donald Trump delivers his acceptance speech, August 27: “At no time before have voters faced a clearer choice between two parties, two visions, two philosophies, or two agendas. This election will decide whether we save the American dream, or whether we allow a socialist agenda to demolish our cherished destiny. This election will decide whether we protect law-abiding Americans, or whether we give free rein to violent anarchic agitators and criminals who threaten our citizens … If the left gains power, they will demolish the suburbs, confiscate your guns, and appoint justices who will wipe away your Second Amendment and other constitutional freedoms.” Photo: REUTERS/Kevin Lamarque

29) President Donald Trump pumps his fist at the crowd as he stands with first lady Melania Trump, his son Donald Trump Jr. and his son’s girlfriend Kimberly Guilfoyle after delivering his acceptance speech as the Republican presidential nominee during the final event of the Republican National Convention on the South Lawn of the White House in Washington, August 27. A defiant Trump accepted the nomination for a second term with a scathing attack on rival Joe Biden, asserting that a Democratic victory in November would only exacerbate the racial strife and coronavirus pandemic besieging the nation. REUTERS/Carlos Barria

30) President Donald Trump, first lady Melania Trump and their extended family watch Trump campaign fireworks explode behind the Washington Monument from the South Lawn of the White House, August 27. The made-for-television scene – befitting the first reality TV host to serve as president – stood in marked contrast to Biden’s acceptance speech last week, which was broadcast live from a largely empty arena in a nod to the disease. Photo: REUTERS/Kevin Lamarque

32) Fireworks spell out “2020” behind the Washington Monument after President Trump delivered his acceptance speech from the South Lawn of the White House, August 27. Speaking from the White House South Lawn despite criticism he was using the executive residence as a political prop, Trump portrayed Biden, a career politician with a long record as a moderate, as a far-left extremist who would usher in a lawless, dangerous America. Photo: Doug Mills/Pool via REUTERS

33) This GOES-16 GeoColor satellite image taken on August 26, 2020, at 4:50 p.m. EDT, shows Hurricane Laura over the Gulf of Mexico. Hurricane Laura strengthened into “an extremely dangerous Category 4 hurricane,” before making landfall along the Louisiana-Texas border. Photo: NOAA via AP

36) Lonnie Gatte and Teri Goleman kiss after returning to their residence, a 40-foot camping trailer, to find it completely destroyed in the aftermath of Hurricane Laura in Sulphur, Louisiana, August 27, 2020. Hurricane Laura ripped through Louisiana on Thursday, destroying buildings in towns across the southwestern corner of the state and killing four people, as one of the most powerful storms to hit the state. Photo: REUTERS/Adrees Latif

37) A man raises an American flag in front of Trump graffiti after Hurricane Laura made landfall in Lake Charles. Photo: Getty Images

38) A woman dances as she visits an outdoor immersive-experience exhibition during the 2020 Beijing International Light Festival at a park in Beijing on August 22, 2020. Photo: Wang Zhao / AFP / Getty

39) Santas concentrate as they attend a socially distanced Santa-school session at Southwark Cathedral in London, England, on August 24, 2020. Britain’s much-loved Santa school will train the nation’s Santas to socially distance in order to keep the magic of the Christmas grotto alive this year, despite COVID-19 restrictions potentially interfering with the festive season. Photo: Kirsty Wigglesworth / AP

40) A woman dressed as an elf takes the temperatures of attendees of the Ministry of Fun Santa School outside Southwark Cathedral, in London, Britain. Photo: Reuters