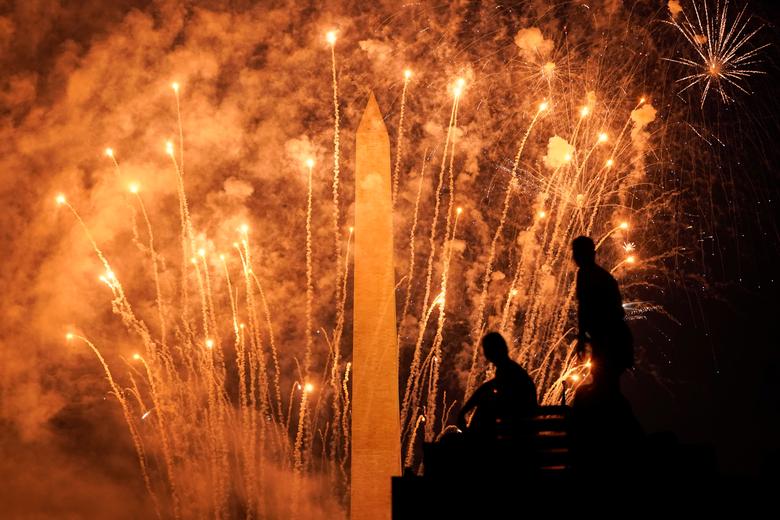 2) Red and blue smoke is fired at the Ellipse of the White House during the “Salute to America” event held to celebrate Fourth of July Independence Day in Washington. Photo: REUTERS/Sarah Silbiger

7) People select fireworks for purchase from a vendor in Orlando on July 4. Photo: Getty Images

9) Dr. Joseph Varon (center) notifies the family of a patient who died inside the coronavirus unit at the United Memorial Medical Center in Houston, July 6. Photo: AP

10) Drones fly over the Han river showing messages to support the country as measures to avoid the spread of the coronavirus continue, in Seoul, South Korea, July 4, 2020. Photo: Yonhap via REUTERS

11) Danish police officers take pictures of the base of the “Little Mermaid” statue in Copenhagen after it was vandalized. Photo: Getty Images

12) A private security member tries to detain a protester while putting zip ties on a barricade outside the home of Mark and Patricia McCloskey during a protest against racial inequality in St Louis, Missouri, July 3, 2020. The McCloskeys had waved guns at protesters earlier in the week during a June 28 protest that called for police reforms. Photo: REUTERS/Lawrence Bryant

13) In the Gaza Strip, Samih Kaeden marks a calendar which shows the number of days left to meet his son who has been detained for 17 years in an Israeli prison. Photograph: Anadolu Agency/Getty Images

14) Two Palestinian girls — part of a team of people with amputations, some of whom lost limbs in an Israeli fire — attend a soccer training session arranged by the International Committee of the Red Cross for the first time after COVID-19 restrictions were eased in the central Gaza Strip, July 7. Photo: Reuters

15) A child is seen in a window at a public housing tower along Racecourse Road that was placed under lockdown due to the coronavirus outbreak in Melbourne, Australia, July 6, 2020. AAP Image/James Ross/via REUTERS

17) Brides wearing their wedding dresses stage a protest against the postponement of their marriages due to the strict protocol for all religious ceremonies within the coronavirus pandemic, by the Trevi Fountain in Rome, on June 7, 2020. Their placards read “give us back the freedom to celebrate,” “church doors closed to wedding,” “a dream limited by restrictions,” and “unrestricted marriage.” Photo: Tiziana Fabi / AFP / Getty

18) Girls wearing face shields wait for their parents to enter the zoo on the outskirts of Quito, Ecuador, on July 8, 2020. The zoo is reopening but with strict new social distancing protocols for visitors, due to the COVID-19 pandemic.  Photo: Dolores Ochoa / AP

19) Beefeaters officially reopen the Tower of London after three months in lockdown, opening the gate and lowering the drawbridge. Photograph: Jill Mead/The Guardian

20) Visitors take pictures of the painting “Mona Lisa” (La Joconde) by Leonardo da Vinci at the Louvre museum in Paris as the museum reopens its doors to the public after an almost four-month closure due to the coronavirus outbreak in France. Photo: REUTERS/Charles Platiau

22) Two lightning bolts frame the One World Trade Center as they hit the Hudson River in front of the skyline of lower Manhattan in New York City, during a thunderstorm on July 6, 2020, as seen from Jersey City, New Jersey.  Photo: Gary Hershorn / Getty

23) A species of unrivalled variety, sharks find themselves threatened around the world by overfishing, microplastics and habitat loss. Dwarf lantern sharks are 6 to 8 inches long, rarely seen and live in very deep waters, mostly around the Caribbean. They were only discovered in 1964. Photograph: Chip Clark/Courtesy of Smithsonian Institution

24) Osprey chicks that hatched at Loch Arkaig pine forest in the Highlands, Scotland about five weeks ago achieve fame on a live-stream nest camera during lockdown. The chicks, which are barely five weeks old, have been watched by over 250,000 viewers around the world. Photograph: Lewis Pate/WTML/PA

25) Jasper, an 8-month-old koala joey, is weighed on a scale at the Sydney Zoo, July 8. Photo: WireImage

26) Villagers use nets to catch offerings thrown by Tenggerese worshippers during the Yadnya Kasada Festival at the crater of Mount Bromo in Probolinggo, East Java, Indonesia. As part of the festival, offerings of rice, fruit, vegetables and flowers are thrown into the volcano to appease the mountain gods. Photo: Getty Images

28) Visitors look at statues illustrating the fate of people who do bad deeds in a garden depicting a Buddhist version of Hell, at the Wat Saeng Suk temple in the Thai coastal province of Chonburi, on July 9, 2020.  Photo: Lillian Suwanrumpha / AFP / Getty. Another look. Photo: AFP

Walt Disney World reopened Saturday after being closed for months. Here’s what it looked like when visitors returned to the park.