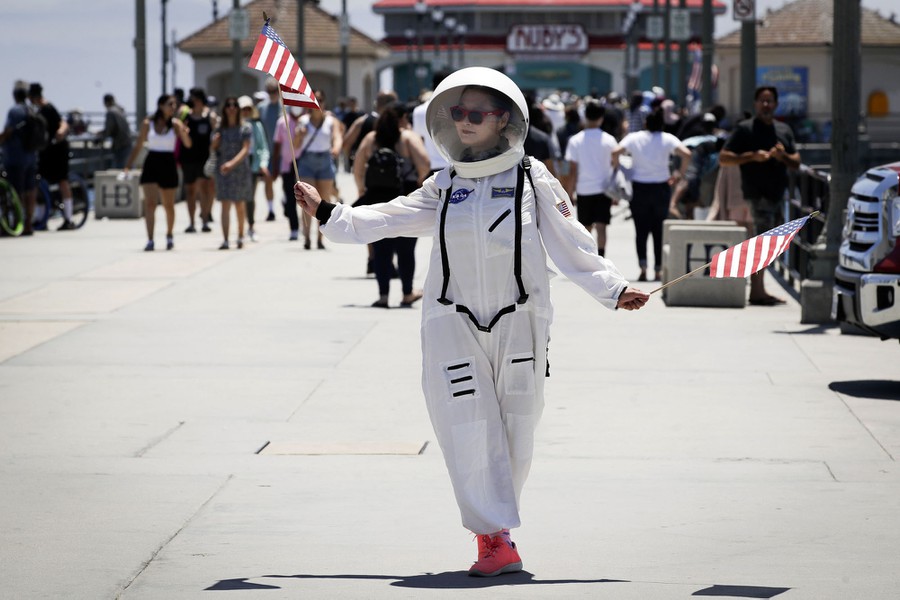 6) A sheriff’s deputy arrests a protester as activists and members of different tribes from the region blocked the road to Mount Rushmore National Monument. Photo: Getty Images

10) Mark and Patricia McCloskey brandish and point weapons at protesters as they entered their neighborhood during a demonstration against St. Louis Mayor Lyda Krewson in St. Louis, Missouri, on June 28, 2020. Photo: Lawrence Bryant / Reuters

11) Another look. Mark McCloskey and his wife Patricia McCloskey draw their firearms on protestors, one of whom holds a video camera and microphone (R), as they enter their neighborhood during a protest against St. Louis Mayor Lyda Krewson, in St. Louis, Missouri, June 28, 2020. Several hundred white and Black protesters walked through an open gate into the community where the couple live. They were met by Mark McCloskey holding what looked like an automatic rifle and shouting “get out!” several times at the crowd. Then Patricia McCloskey appeared from the front of the house holding a handgun. Reuters photographer Lawrence Bryant quickly became more concerned. “She had her finger on the trigger and looked nervous and I became a little bit more worried, as there were kids out there and she was sporadically pointing the gun at random people,” he recalled. Photo : REUTERS/Lawrence Bryant

12) Crews stand around the statue of Confederate general Stonewall Jackson after it was removed from the pedestal in Richmond, Virginia. Photo: REUTERS/Julia Rendleman

13) A “Defund the Police” mural outside Milwaukee’s City Hall was painted over to read “Defend the Police.” The mural was repainted Friday to show its original message. Photos: UrbanMilwaukee.com

14) Members of the Mississippi Honor Guard lower the state flag at the state capitol in Jackson, Mississippi, on July 1, 2020, a day after a bill that would replace the state flag, which includes a Confederate emblem, was signed into law. Photo: Suzi Altman / Reuters

15) A protester stands with her hand up in front of a road blocked by Seattle police in the Capitol Hill Organized Protest zone, Washington. Police have torn down tents in the city’s so-called occupied protest zone after the mayor ordered to clear it. Photo: AP

16) A child plays on the steps of the U.S. Supreme Court building as an anti-abortion activist holds a sign during a demonstration outside the court in Washington, June 29, 2020. The child was being photographed by a parent (not shown) at the same time demonstrators gathered outside the court. The court defended abortion rights in a major ruling by striking down a Louisiana law requiring doctors who perform abortions to have a sometimes difficult-to-obtain formal affiliation called “admitting privileges” at a hospital within 30 miles (48 km) of the clinic. Photo: REUTERS/Carlos Barria

17) A police officer walks in front of a burning pile of seized illegal drugs during a destruction ceremony to mark the United Nations’ International Day Against Drug Abuse and Illicit Trafficking in Yangon, Myanmar. Photo: AFP

18) A medical staff member rests in front of a fan in the COVID-19 intensive care unit at the United Memorial Medical Center in Houston on June 30. COVID-19 cases and hospitalizations have spiked since Texas reopened, pushing intensive-care wards to full capacity and sparking concerns about a surge in fatalities as the virus spreads. Photo: Getty Images

19) Brendan Williams, the president of the New Hampshire Health Care Association, wears an isolation gown with no sleeve openings for hands, which was received in a shipment from the federal government, outside the Webster at Rye senior-care center in Rye, New Hampshire, on July 1, 2020. The problematic gowns, child-size examination gloves, and surgical masks with ear loops that break when stretched make up the bulk of the personal protective equipment recently sent by FEMA to New Hampshire nursing homes, according to Williams. The facility is not using the items they received from FEMA. Photo: Charles Krupa / AP

20) Teachers and students wear protective gear as a precaution against the new coronavirus outbreak during a class at a Quran educational facility at on the outskirts of Jakarta, Indonesia. Photo: AP

21) Students of Sam Khok school wearing face masks and face shields are seen inside old ballot boxes repurposed into partitions as they attend a class after the Thai government eased isolation measures and introduced social distancing to prevent the spread of the coronavirus, as schools nationwide reopen, at Pathum Thani province, Thailand. Photo: REUTERS/Athit Perawongmetha

23) Lily Hendrickx, 83, a resident at the Belgian nursing home ‘Le Jardin de Picardie’ enjoys hugs and cuddles with Marie-Christine Desoer, the director of the residence, through a wall made with plastic sheets, in Peruwelz, Belgium. Photo: REUTERS/Yves Herman

24) Jefferson Riascos (center) is embraced by Diana Paola Angola (left) who recovered from COVID-19, after asking her to marry him at the Versalles Clinic in Cali, Colombia.  The baby of the couple was delivered while Angola was under induced coma at the Intensive Care Unit. Photo: Getty Images

25) A Phantom of the Opera sign asks people to wear a mask in public in Manhattan. Photo: REUTERS/Carlo Allegri

26) Visitors observe the stalagmites of the White Grotto in Castellana Grotte, Italy, during a tour on June 28, 2020. The Grotte di Castellana has reopened to members of the public after being closed for three months due to the coronavirus pandemic. Photo: Donato Fasano / Getty

27) An actor dressed as a zombie performs during a drive-in haunted house show, performed by Kowagarasetai (Scare Squad), for people inside a car in order to maintain social distancing amid the spread of the coronavirus disease, at a garage in Tokyo, Japan. Photo: Reuters

28) Eight-year-old Karl Huber concentrates on a tricky shot during the neighborhood mini golf event in Franklin,WI on Saturday, June 27, 2020. The course featured 18 holes throughout the neighborhood designed and built by the participating homeowners. Photo:  Scott Ash/Now News Group

29) Models present creations “2033 (teens)” by Belarusian designer Anastasiya Kutepova during a show at the Fashion Mill, in Minsk. Photo: Reuters

AND FROM THE JULY 4TH ARCHIVE:

Two young women try their best to teach an older gentleman how to do the “Macarena” during July 4 celebrations in New York City’s Battery Park, 1997. Photo: Getty Images