The nation’s first Father’s Day was celebrated on June 19, 1910, in the state of Washington. However, it was not until 1972, 58 years after President Woodrow Wilson made Mother’s Day official, that the day honoring fathers became a nationwide holiday in the United States.

Many men, however, continued to disdain the day. As one historian writes, they “scoffed at the holiday’s sentimental attempts to domesticate manliness with flowers and gift-giving, or they derided the proliferation of such holidays as a commercial gimmick to sell more products–often paid for by the father himself.”

During the 1920s and 1930s, a movement arose to scrap Mother’s Day and Father’s Day altogether in favor of a single holiday, Parents’ Day.

However, the Great Depression derailed this effort to combine and de-commercialize the holidays. Struggling retailers and advertisers redoubled their efforts to make Father’s Day a “second Christmas” for men, promoting goods such as neckties, hats, socks, pipes and tobacco, golf clubs and other sporting goods, and greeting cards.

In 1972, in the middle of a hard-fought presidential re-election campaign, Richard Nixon signed a proclamation making Father’s Day a federal holiday at last.

We have a tradition around this time of year of dipping into my father’s record collection for some interesting selections I hope you’ll enjoy. Not that difficult because I have his collection! Let’s get started.

Back in the late 1960’s Tom Jones had a TV variety show. So did Engelbert Humperdinck.

Dad liked Tom Jones, but not as much as Engelbert. Dad said Jones, unlike Humperdinck, “screamed.”

Dad never bought a Tom Jones album, but he bought this one that featured a song he really loved.

We need a grand opening. 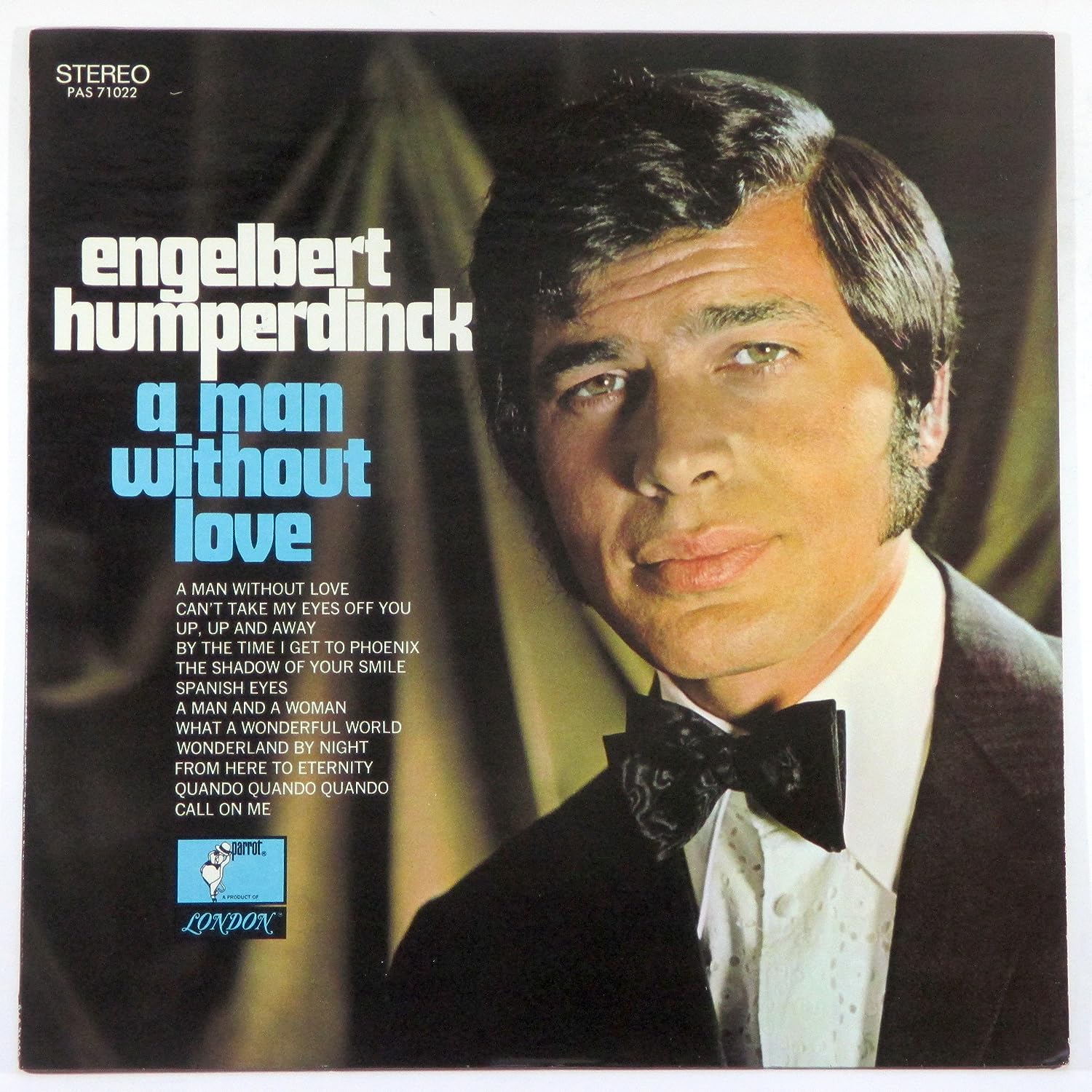 Humperdinck is now 84. Earlier this year he did an interview with the Guardian.

I get up at at 6.30am. I watch a little TV – usually the news – to wake up my mind, and then I do exercises, followed by breakfast.

My life has changed since my wife, Patricia, was diagnosed with Alzheimer’s, that terrible disease. So now when I go downstairs, I usually just sit down and have a cup of tea or coffee and do my crosswords. The first people I talk to are the live-in carers who help me look after her. I’m pleased to say that Patricia is making some progress. She’s starting to talk a little. She said ‘Good morning’ to me this morning, which was rather lovely.

I spend time playing golf, at a course two miles from our Beverly Hills home, where I’ll grab some lunch and a nice glass of wine in the clubhouse. If I really want to let my hair down I’ll ride my Harley-Davidson around the Hollywood Hills. Sometimes I’ll get to the lights, pull up my visor, and see people next to me do a double take: ’Oh my God, it’s Engelbert Humperdinck.’ I don’t mind. Recognition is one of the greatest compliments you can have.

Dad loved the piano. So it’s not surprising his collection had a few albums by Roger Williams. The artist began playing piano at the age of three. Later his father urged Williams to take up boxing. When Williams suffered more than one broken nose in the ring he returned to his true love, music. Very good move.

A Williams recording from 1955 was the only piano instrumental to reach #1 on the Billboard charts and sold two million copies. And yes, that is the Lawrence Welk orchestra that Dad and family watched religiously each and every Saturday night.

“The biggest thing I have to offer,” Williams told Time magazine in 1968, “is emotion. I think I play with more feeling than any other pop pianist.”

My father served in the Army during WWII. He nearly had his legs blown off in Australia. Dad and the legs, though severely burned, survived.

Not surprisingly, given the era, Dad was a fan of the big bands.

In 1961 a cast of all-star studio musicians released an album of standards and classics.

They were sponsored by the Four Roses Distillers Co.

Here the band performs their version of “Love,” a song  written by Ralph Blane and Hugh Martin that was first released by Judy Garland with Victor Young and His Orchestra in 1946.

Yes, I can imagine that album of Dad’s playing in the background of a cocktail party.

I was blessed to have wonderful caring, supportive parents…who were also cool.

Dad had the album you’ll see below. Cool.

But Mom bought it for him. Even cooler.

Dolores Erickson is the model. She wore a bikini with the shoulder straps pushed down and hidden, and that’s mostly shaving cream she’s wearing.  Real whipped cream would run and be too smelly under the hot lights used by the photographer.  Erickson is wearing the real stuff on her head and on the index finger she touched to her lips. She was three months pregnant at the time. This September she’ll turn 85.

Did I mention my dad was cool?

I will always think so, even if he and the family would gather around the TV on Saturday nights and watch the Lawrence Welk Show.

Welk’s orchestra and singers often did versions of contemporary recordings. Another album in my father’s collection…

Hard to imagine Welk and his champagne music makers doing Sonny and Cher.

Here are the original artists of one of those tunes on the above LP.  The group is from Australia. The song is from a 1966 movie of the same name and was nominated for an Academy Award. The single made history when the group became the first Australians ever to reach the No.1 spot in the USA.

The TV performance is a broadcast from Montreal’s Expo ’67.

Kevin’s conscience: Yes, you can, Kev.

I know what you’re thinking.

Twice in the same blog?