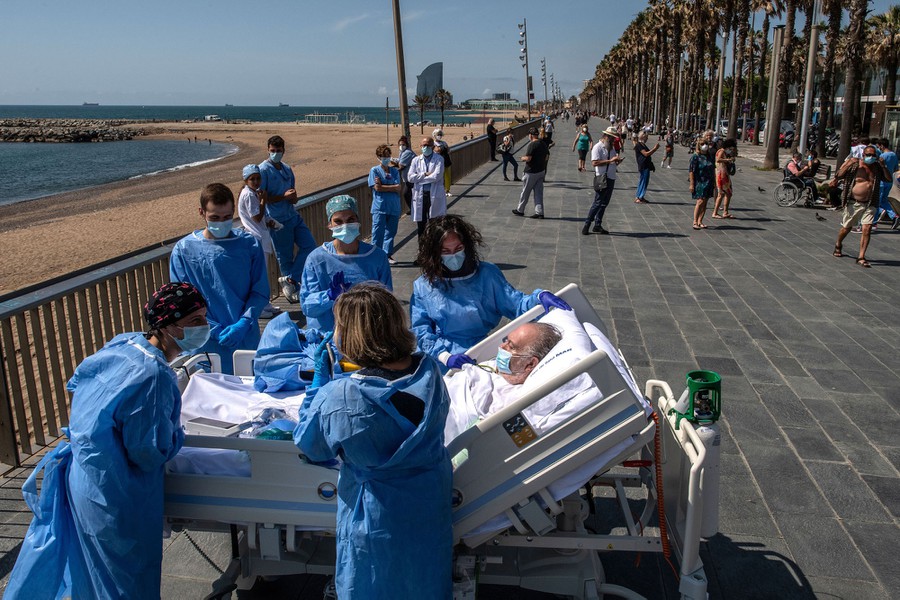 1) President Donald Trump pumps his fist toward police as he walks between lines of riot police in Lafayette Park across from the White House while walking to St John’s Church for a photo opportunity during ongoing protests in the wake of the death of George Floyd, at the White House in Washington. Photo: REUTERS/Tom Brenner

2) President Trump walks past graffiti during a to visit St. John’s Episcopal Church across from the White House. Photo: REUTERS/Tom Brenner

3) U.S. President Donald Trump holds up a Bible as he stands in front of St. John’s Episcopal Church across from the White House after walking there for a photo opportunity during ongoing protests over racial inequality in the wake of the death of George Floyd while in Minneapolis police custody, at the White House in Washington, U.S., June 1, 2020. Photo: REUTERS/Tom Brenner TPX IMAGES OF THE DAY

4) Military personnel walked into the secured White House area ahead of a protest Saturday against racial inequality in reaction to the killing in Minneapolis police custody of George Floyd. Photo: Lucas jackson/Reuters

5) Nihad Hall, center, of Reston, Va., protested with daughters Sireen, 13, left, and Yasmeen, 16, near the White House Saturday, as demonstrations continue over the killing of George Floyd May 25 while in police custody. The four Minneapolis police officers who were arresting him were fired and have been charged in his killing. Photo: Jacquelyn Martin/Associated Press

6) Demonstrators passed the U.S. Capitol Saturday during a protest against the killings and abuse of black Americans by police. Photo: Jonathan Ernst/Reuters

7) Law enforcement personnel stand guard on the steps of the Lincoln Memorial in Washington, June 2. Photo: Courtesy of James Harnett/Social Media via REUTERS

8) Terrence Floyd, the brother of George Floyd, reacts at a makeshift memorial honoring his brother at the spot where he was taken into custody, in Minneapolis, Minnesota. Photo:  REUTERS/Lucas Jackson

9) Philonise Floyd, brother of George Floyd, is surrounded by family members as he speaks at a protest rally against his brother’s death, in Houston, Texas, June 2. Photo: REUTERS/Adrees Latif

12) In Louisville, a protester talks to a police officer at a demonstration following the killing of George Floyd. Photograph: Amy Harris/Rex/Shutterstock

13) A demonstrator offers flowers to a National Guardsman outside the office of Los Angeles County District Attorney Jackie Lacey during a protest June 3, 2020, over the death of George Floyd, who died May 25 after being restrained by police in Minneapolis. Photo: AP

14) A demonstrator throws a brick at a sheriff van during a protest in St. Louis, Missouri, June 1, 2020, against the death of African American man George Floyd while in Minneapolis police custody. Photo: Reuters

15) Protesters loot shops in Santa Monica, California, May 31, 2020, during a demonstration over the death of George Floyd in Minneapolis police custody. Photo: AFP

16) A broken Statue of Liberty figure lies in a pile of shattered glass outside a looted souvenir shop after a night of protest on June 2, 2020, in Manhattan. Photo: Johannes Eisele / AFP / Getty

17) A protester and a police officer clash near Downing Street in London during a Black Lives Matter protest following the death of George Floyd, who died in police custody in Minneapolis. Photo: REUTERS/Toby Melville

18) A tanker truck drives into thousands of protesters marching on 35W north bound highway during a protest against the death of George Floyd, in Minneapolis, Minnesota, May 31, 2020. Photo: Reuters

22) A child carrying a small broom walks past a line of National Guard members deployed to Bellevue Square, as community members clean up after looting and vandalism that occurred in downtown Bellevue, Washington, June 1, 2020. Photo: Reuters

23) Lucia Curatolo-Boylan, a mother of four children, ages 4 to 10, in New York City public schools, says she hasn’t had enough time to work with her 4-year-old daughter, Mara Jane Boylan, on top, because the schoolwork of two of her older children requires so much supervision. Preliminary research suggests students nationwide will return to school in the fall with roughly 70% of learning gains in reading relative to a typical school year, and less than 50% in math, according to projections by NWEA, an Oregon-based nonprofit that provides research to help educators tailor instruction. It expects a greater learning loss for minority and low-income children who have less access to technology, and for families more affected by the economic downturn. Photo: Kevin Hagen for The Wall Street Journal

25) A 5G K9 robot distributes hand sanitizer to visitors at a shopping mall in Bangkok as sectors of the economy reopen following restrictions to halt the spread of the coronavirus, June 4. Photo: Getty Images

26) Children sit at individual desks during a lesson at the Harris Primary Academy Shortlands school in London, June 4. As part of COVID-19 lockdown measures, the schools have taught smaller pods of students to help maintain social distancing. Photo: Getty Images

27) A group of bison and their calves walk on the road as the Montana gates to Yellowstone National Park opened for day trips on June 1, 2020, in Yellowstone National Park, Wyoming. The park’s Montana entrances opened as the state entered the second phase of lifting lockdown measures imposed due to the COVID-19 pandemic. Photo: William Campbell / Getty

28) In Cyprus, open-mouthed swallow chicks demand food from their nest in the roof of an outside terrace in the city. Swallows migrate to the island in early spring, where they reproduce, then leave in late autumn for the warmer African countries. Photograph: Katia Christodoulou/EPA