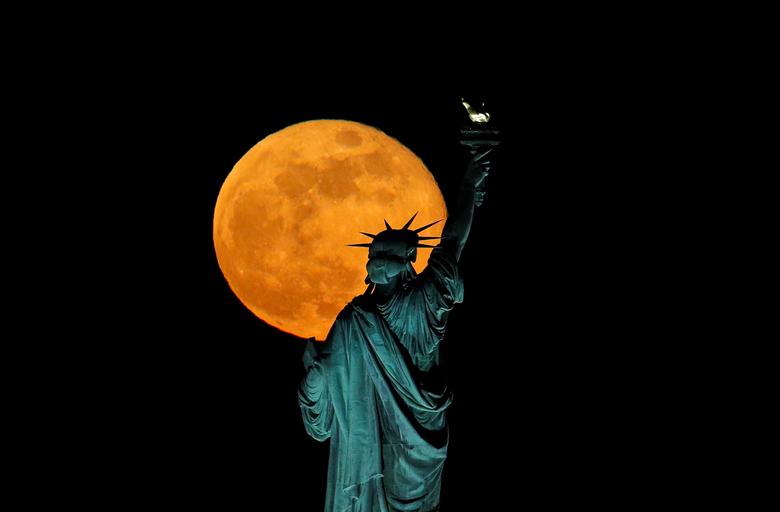 2) A child stands for a photo in front of a poster during a protest calling for the reopening of California outside the California State Capital building in Sacramento. Photo: REUTERS/Stephen Lam

3) A protester waves a flag during a rally calling for the state to lift stay-at-home orders and reopen the economy in Richmond on May 6. Virginia Gov. Ralph Northam said phase one of reopening the state will begin next week. Photo: Drew Angerer / Getty Images

5) A police officer raises a baton at a man who, according to police, had broken the social distancing rule, outside a wine shop during an extended nationwide lockdown to slow the spread of the coronavirus disease (COVID-19), in New Delhi, India. Photo: Reuters

6) Ayse Mehmet, whose daughter Sonya Kaygan died from COVID-19, has tears wiped by her three-year-old granddaughter, also named Ayse, at her home in Enfield, Britain, April 27, 2020. Kaygan, 26, who worked the Elizabeth Lodge care home nearby, is one of over 100 frontline health workers killed by the coronavirus in Great Britain. Photo: REUTERS/Peter Nicholls

7) A student picks up his diploma during a graduation ceremony at Bradley-Bourbonnais Community High School in Bradley, Illinois, May 6. Photo: Getty Images

8) President Donald Trump points as he watches workers on the assembly line manufacturing protective masks during a tour of a Honeywell facility in Phoenix, Arizona, May 5, 2020. Trump said he did not wear a mask during the tour after consulting Honeywell’s chief executive, despite requirements at the plant that workers wear them. Trump wore safety goggles during the factory tour.  Photo: REUTERS/Tom Brenner

9) President Donald Trump speaks during an event to sign a proclamation in honor of World Nurses Day, May 6. Photo: AP

10) U.S. Vice President Mike Pence stands among television soundmen, radio reporters and other media personnel all wearing protective masks as he listens to President Trump speak during an event in honor of National Nurses Day in the Oval Office at the White House. Photo: REUTERS/Tom Brenner

11) Members of the Massachusetts Army National Guard distribute free milk, offered instead of dairy farmers throwing away excess milk due to lower demand amid the coronavirus, in Boston, Massachusetts. Photo: REUTERS/Brian Snyder

12) People have lunch in a hot pot restaurant that reopened with the implementation of plastic barriers and social distancing measures to prevent the spread of the coronavirus in Bangkok, May 4. Photo: Reuters

13) Models and family members are seen dining at a restaurant where they test servers providing drinks and food to models pretending to be clients in safe ‘quarantine greenhouses’ in which guests can dine in Amsterdam, Netherlands. Photo: REUTERS/Eva Plevier

14) Mother Lisa Fascilla (second from left) and her children, Nina (left) and Alex (third from left) receive a beer delivery from Karen and Mark Heuwetter and their two dogs, Buddy and Barley, in Huntington Village, New York, May 3. Photo: Getty Images

15) A couple sits on the intracoastal waterway as sun-seekers return to the beach during a phased reopening in St. Pete Beach, Florida, May 4, 2020. Photo: REUTERS/Steve Nesius

17) U.S. President Donald Trump participates in a live Fox News Channel virtual town hall called ‘America Together: Returning to Work’ with with hosts Bret Baier and Martha MacCallum about the response to the coronavirus pandemic broadcast from inside the Lincoln Memorial in Washington. Photo: REUTERS/Joshua Roberts

18) A dead Asian giant hornet sent from Japan is held on a pin by Sven Spichiger, an entomologist with the Washington State Department of Agriculture, May 4, 2020, in Olympia, Washington. Photo: AP

19) A female baby fox wrapped in a blanket is seen at the Animal Protective Association of Ronda (ARPA) after being found walking along a street by a villager in the village of El Gastor, at the province of Cadiz, near Ronda, during a lockdown amid the coronavirus disease (COVID-19) outbreak, in Ronda, Spain, May 7, 2020. REUTERS/Jon Nazca TPX IMAGES OF THE DAY

21) A female koala licks water off the trunk of a eucalyptus tree after rainfall in the You Yangs regional park in Little River, Victoria, Australia. Photograph: Echidna Walkabout and Koala Clan/Reuters

22) A Greylag Goose which has nested in a flower bed and laid four eggs inside the now quiet York railway station. The bird, nicknamed Mother Goose, was first spotted last month by British Transport Police. The train station has fallen quiet due to government restrictions on travel. Photograph: Richard Saker/The Observer

23) Dummies are seen replacing the audience during the regular season baseball game between SK Wyverns vs. Hanwha Eagles, despite most sports being cancelled around the world, in Incheon, South Korea. Photo: REUTERS/Kim Hong-Ji

24) This is a picture of Little Richard in “Mister Rock And Roll” in 1957. The pioneering musician, whose songs Tutti Frutti and Long Tall Sally were among the most flamboyant of the rock’n’roll era, has died at the age of 87. Photo: Michael Ochs archive