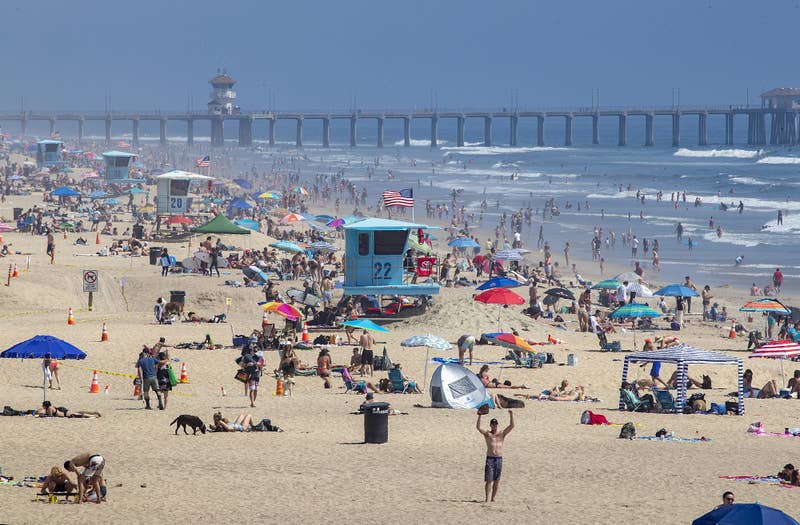 1) A militia group stands in front of the governor’s office in Michigan after protesters occupied the state Capitol building during a vote to approve the extension of Gov. Gretchen Whitmer’s stay-at-home order due to the coronavirus outbreak in Lansing, Michigan, April 30. Photo: Reuters

2) Members of a militia group stand near the doors to the chamber in the capitol building before the vote on the extension of Governor Gretchen Whitmer’s emergency declaration/stay-at-home order due to the COVID-19 outbreak, in Lansing, Michigan. Photo: Reuters

3) Police block protesters trying to enter the chamber of the Michigan House of Representative where lawmakers were debating an extension of Gov. Gretchen Whitmer’s state of emergency on April 30 in Lansing. Michigan United for Liberty organized the protest, dubbed the American Patriot Rally, to call for the reopening of businesses. Photo: Jeff Kowalsky / AFP – Getty Images

4) Demonstrators participate in a Reopen Delaware rally against government-mandated closures and calling for the reopening of the state at the state capitol in Dover, Delaware, May 1, 2020. Photo: REUTERS/Jonathan Ernst

5) Demonstrators participate in a Reopen Delaware rally calling for the reopening of the state at the capitol in Dover, Delaware, May 1, 2020. Photo: REUTERS/Jonathan Ernst

6) Margot Williams and Jacqueline Takac march during a protest against the state’s stay-at-home order in Spokane, Washington, May 1, 2020. Photo: REUTERS/Young Kwak

8) Jessica King sits under a dryer at a salon in Marietta, Ga., during the phased reopening of businesses and restaurants. Photo: Bita Honarvar / Reuters

9) Vice President Mike Pence visits Dennis Nelson, a recovered COVID-19 patient who is donating his blood for research, at Mayo Clinic in Rochester on April 28. His visit sparked criticism for his failure to wear a mask, ignoring the prestigious Minnesota hospital’s rules. Two days later, Pence wore a mask during a visit to a General Motors plant. Photo: Nicholas Pfosi / Reuters

12) Health workers wearing protective suits hold signs about a 16-day-old infant who has recovered from COVID-19 and is being discharged from the National Children’s Hospital in Quezon city, Metro Manila, Philippines. Photo: AP

13) Members of the New York Police Department salute the U.S. Navy hospital ship Comfort, as it departs Manhattan’s West Side to return to Naval Station Norfolk on April 30, 2020, in New York City. The USNS Comfort, a floating hospital, departed New York after the last patient aboard was discharged earlier this week. The Comfort’s 1,000 beds and 12 operation rooms were deployed to ease pressure on New York hospitals amid the coronavirus pandemic. Photo: Jeenah Moon / Getty

14) Surrounded by police, a man exits a closed beach with his arms raised in Galveston, Texas, on April 26, 2020. The man ran into the surf after being chased by police earlier. Adrees Latif / Reuters

15) A woman reacts in pain after being pepper sprayed by a member of the South African Police Service, not visible, for not wearing a face mask, as members of the Johannesburg Metro Police Department walk away, in Hillbrow, Johannesburg. Photo: AFP

16) Tape is placed around playground equipment that has been closed off to protect against the spread of the coronavirus in Kinuta Park in Tokyo, Japan, on April 27, 2020. Photo: Carl Court / Getty

17) Gala speaks with her friend and classmate Oliver from their courtyard in Barcelona as the lockdown to combat the spread of coronavirus continues, April 29. Photo: AP

18) Roxana Solano wears personal protective equipment as she plays the guitar and leads a sing-along at a temporary quarantine and isolation facility for homeless people in North Miami, Florida, on April 27, 2020. Photo: Lynne Sladky / AP

19) Triathlete Lloyd Bebbington trains in a pool in his garden at home in Newcastle-under-Lyme, England, on April 26, 2020. Photo: Carl Recine / Reuters

20) The T-Rex Walking Club, a group of people that gathers in a variety of inflatable costumes and parades through neighborhoods in hopes of cheering up the community during the coronavirus lockdown, is photographed in Ferndale, Michigan, on April 27, 2020. Photo: Emily Elconin / AFP / Getty.

21) Viv and Carol from St. James’ church, dressed as the character Cat in the Hat, pose for a photograph as they deliver meals to vulnerable residents following the outbreak of the coronavirus disease (COVID-19), Bolton, Britain. Photo: Reuters

22) Chippendales emcee Jayson Michael hosts a virtual party from his home as the dance troupe adapts to being unable to perform in live shows in Las Vegas, April 29. Photo: Getty Images

23) The Duke of Wellington statue outside the Gallery of Modern Art, which has become well known for having an orange traffic cone placed on its head by students and revelers in the city, is seen sporting a face mask on April 29, 2020, in Glasgow, Scotland. Photo: Jeff J Mitchell / Getty

24) Sheep that are now used to maintain the grass after staff were furloughed graze at Avington Park Golf Course in Avington, Britain, May 1, 2020. Photo: REUTERS/Peter Cziborra

25) Penguins Momo and Omochi are seen during a media preview of their free online animal shows for children and families staying at home due to the coronavirus disease (COVID-19) lockdown, at the Aqua Park Shinagawa in Tokyo, Japan. Photo: Reuters

26) A group of pelicans passes a boy on a scooter in St James’ Park during the lockdown. Photo: John Sibley/Reuters

27) A happy birthday message is displayed on the big screen in Piccadilly Circus for army veteran Captain Tom Moore on his 100th birthday, in London, a gesture of appreciation for his fundraising achievements for the NHS. Photo: Reuters

30) A lifeguard tower is seen as bioluminescent waves crash on the sand, shining with a blue glow, in Manhattan Beach, California, on April 28, 2020. The bioluminescence is a phenomenon caused by certain kinds of phytoplankton associated with red tide that generate a pulse of blue light as the waves crash. Photo: Valerie Macon / AFP / Getty