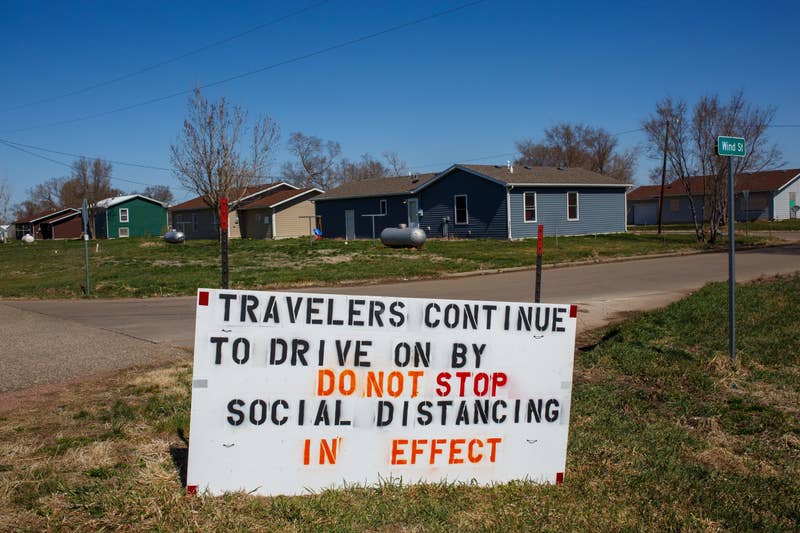 2) Two men hold signs as they protest against the state’s extended stay-at-home order to help slow the spread of the coronavirus as hundreds gather to demonstrate at the Capitol building in Olympia, Washington. Photo: REUTERS/Lindsey Wasson

3) Health care workers stand in the street in counter-protest to hundreds of people who gathered at the State Capitol to demand the stay-at-home order be lifted in Denver, Colorado, April 19, 2020. Photo: Reuters

4) A protester shouts slogans at a ReOpenNC rally against the state’s shut down to prevent the spread of coronavirus in Raleigh, North Carolina, April 21, 2020. Photo: REUTERS/Rachel Jessen

6) People shout at police officers during a demonstration of conspiracy theorists as other demonstrators protest against the lockdown imposed to slow the spread of the coronavirus in Berlin, Germany. Photo: REUTERS/Christian Mang

7) A person holds a sign referencing high unemployment as hundreds gather to protest against the state’s extended stay-at-home order at the Capitol building in Olympia, Washington, April 19, 2020. Photo: REUTERS/Lindsey Wasson

9) Michael Neel, funeral director of of All Veterans Funeral and Cremation, wearing full PPE, looks at the U.S. flag on the casket of George Trefren, a 90 year old Korean War veteran who died of the coronavirus in a nursing home, in Denver, Colorado. Photo: REUTERS/Rick Wilking

11) Pitrik van der Lubbe waves from a crane to his 88-year-old father Henk at a nursing home in Gouda, Netherlands. The crane was made available for free by a company to allow family members to see loved ones in isolation because of the coronavirus. Photo: AP

13) A coyote stands by the roadside as the spread of coronavirus continues, at Golden Gate Bridge View Vista Point across from San Francisco, California. Photo: REUTERS/Shannon Stapleton

15) Cam Gomez and Luiza Meneghim, whose wedding was canceled by City Hall, pose for photographs as the Supermoon rises through the clouds at Golden Gate Bridge View Vista Point across from San Francisco, California. Photo: REUTERS/Shannon Stapleton

17) Iman Avdic, national multiple swimming record holder, maintains her form by practicing in a small plastic pool inside an improvised greenhouse in her grandfather’s orchard in Doboj, Bosnia and Herzegovina, April 23, 2020. Photo: Reuters

18) PCSO Steve Gunning takes part in a dance session, organized by residents of a suburban street in north Wales, UK, to help them keep fit, socialize and deal with the effects of COVID-19. Photo: AP

21) Steven Busulwa, an animal keeper, runs away from a charging rhino at the Uganda Wildlife Conservation Education Center amid the lockdown, in Entebbe, Uganda. Photo:  REUTERS/Abubaker Lubowa

22) A tornado is seen in Madill, Oklahoma, on Wednesday, April 22. Severe storms ripped through parts of Oklahoma, Texas and Louisiana, officials said. At least six people were killed and more than a dozen were injured. Photo: Courtesy Eric Chappell

You don’t have to be a sports fan to appreciate this.