Most responsible dog owners understand cleaning up after a dog poops is a must. No ands, ifs, or buts. That’s not a critical issue. But this makes for interesting discussion. Published in papers all across the country about a week ago:

DEAR ABBY: When I take my dog for a walk, I always carry little doggy bags and pick up his business. I live in a residential neighborhood with alleys behind the houses. After my dog does his business, I pick it up and often throw the tied-up bag in a trash can along the alley.

Is this rude? Is it illegal to put things in other people’s trash cans? My dog may make several stops along our long walks, and I don’t want to carry his waste with me the whole trip.

I’ll get back to how Abby (Phillips) responded in just a bit.

Found this in another newspaper, the Coloradoan in late 2018:

Mike Gutman was out walking his dog, Wyatt, when it happened: The dog pooped.

Gutman was a mile away from the park and two miles away from his house, so he plopped the waste in a bag and threw it in the nearest trash can.

That was his mistake.

He and his Siberian husky-American Staffordshire terrier-mountain dog mix made it maybe half a block before he heard a man yelling at him. A very angry man.

“Did you seriously just put your poop bag in my garbage can?” the man said.

He and Wyatt high-tailed it out of there because the man seemed “pretty aggressive.”

He posted a poll about it on Nextdoor.

Nearly 600 people cast their votes in his poll, titled, “Are you OK with people putting dog poop bags in your garbage can?”

The poll was split 80/20, with most people saying they didn’t mind.

In this next example, there was a decidedly opposite view. The source was New York, a habitat with a well-known reputation for being belligerent. 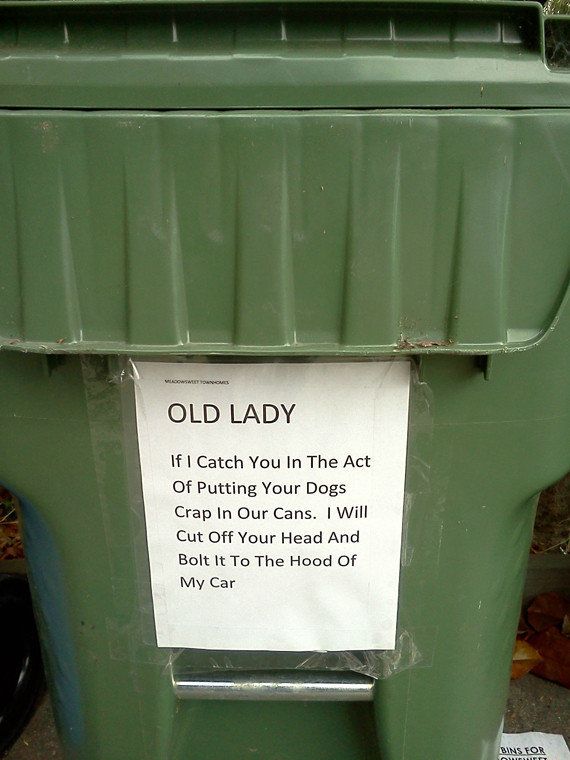 A bit much, wouldn’t you say?

The Dear Abby reader asked if what he/she did is illegal. Could be, depending on where you live. Consider that you probably pay to have your garbage hauled away. Now someone has dumped junk in your trash and doesn’t pay for it go away. You do. That’s called theft.

Somewhat complicating matters is the can itself. Odds are you don’t own it.  The container is the property of the municipality or the company contracted to do the job. There goes the whole “Don’t dump that poop in my garbage can” argument.

Not yours, hey. Can someone then walk across your lawn to get to a bin to toss the poop? Well, that would be trespassing. But if the bin is in an alley, or at the end of a driveway curbside awaiting pickup, it’s essentially fair game.

Here in Franklin our alderwoman Kristen Wilhelm informs that our containers are owned by the city’s contractor, Johns Disposal Service, and they stay with the home. If we move the containers remain. maintenance and cleanliness are the responsibilities of the homeowners. Replacement due to damage is decided on a case by case basis that generally favors the resident (s). Wilhelm suggests taping a notice on the cans saying if you approve or disapprove.

OK, let’s return to Dear Abby. What’s her take? What was her reply to the dump and run culprit?

DEAR CONSIDERATE: Whether it’s illegal in your community is something you should check locally because there may be an ordinance that forbids it. While I can’t speak for everyone, some of the homeowners those trash cans belong to would strenuously object to someone throwing dog doo-doo into them. That’s why my advice is, “When in doubt — DON’T.”

That was this past week. But in 2009, when asked a similar question, Abby wrote back:

As long as the bag was securely sealed, I don’t think adding it to someone’s trash bin was a social no-no.

Another advice columnist is Dear Prudence.

“In the interest of my guiding principle of never getting yelled at, I generally hold out until I find a public waste bin.”

(For the record, this hasn’t happened to us and we’re not aware of this occurring in our neighborhood).

Finally, my view on the topic: The proper etiquette should be to seek a public garbage can or bring it home to your house.

Is it rude to dump in someone else’s can? You bet it is.
—-Jennifer Fischer

Why your pet is acting like a weirdo during quarantine, explained by animal behaviorists.

What happens when the quarantine ends?

Are People Who Live in Dog-Friendly Buildings Happier?

We have coyotes in our area so this story sparked interest. Dog vs. coyote. Which animal won?

A boy with a skull condition gets a puppy. When he learns the dog has a similar issue, hundreds come to his aid.

She hired a plane and spent thousands looking for stolen dog. He finally appeared hundreds of miles away.

Study: Workers who bring their dogs to work had significantly lower levels of stress and that dogs tend to boost overall workplace morale.

Nutty… but it works! Dog owner is hailed a ‘genius’ as she demonstrates wacky way to distract her pets so she can groom them during lockdown.

The best dog food, according to experts and veterinarians.

And you’ll love this. A Dog and Cat Debate Reopening America. (BTW, the author of the column, Jason Gay, is a 1992 UW graduate).

First, a visit to Ohio to learn about the impact on shelters.

NEXT, the Guilford County Sheriff’s Office (NC) has teamed up with McGruff The Crime Dog for a video in which Sgt. M. Buchanan and the trench-coat-wearing mascot demonstrate safety tips.

Funny, but if this is the worst of this guy’s troubles these days…

And, in Jacksonville, Florida, this 21-month old refuses to confess.

We kindly ask that you please share with other dog lovers you know.