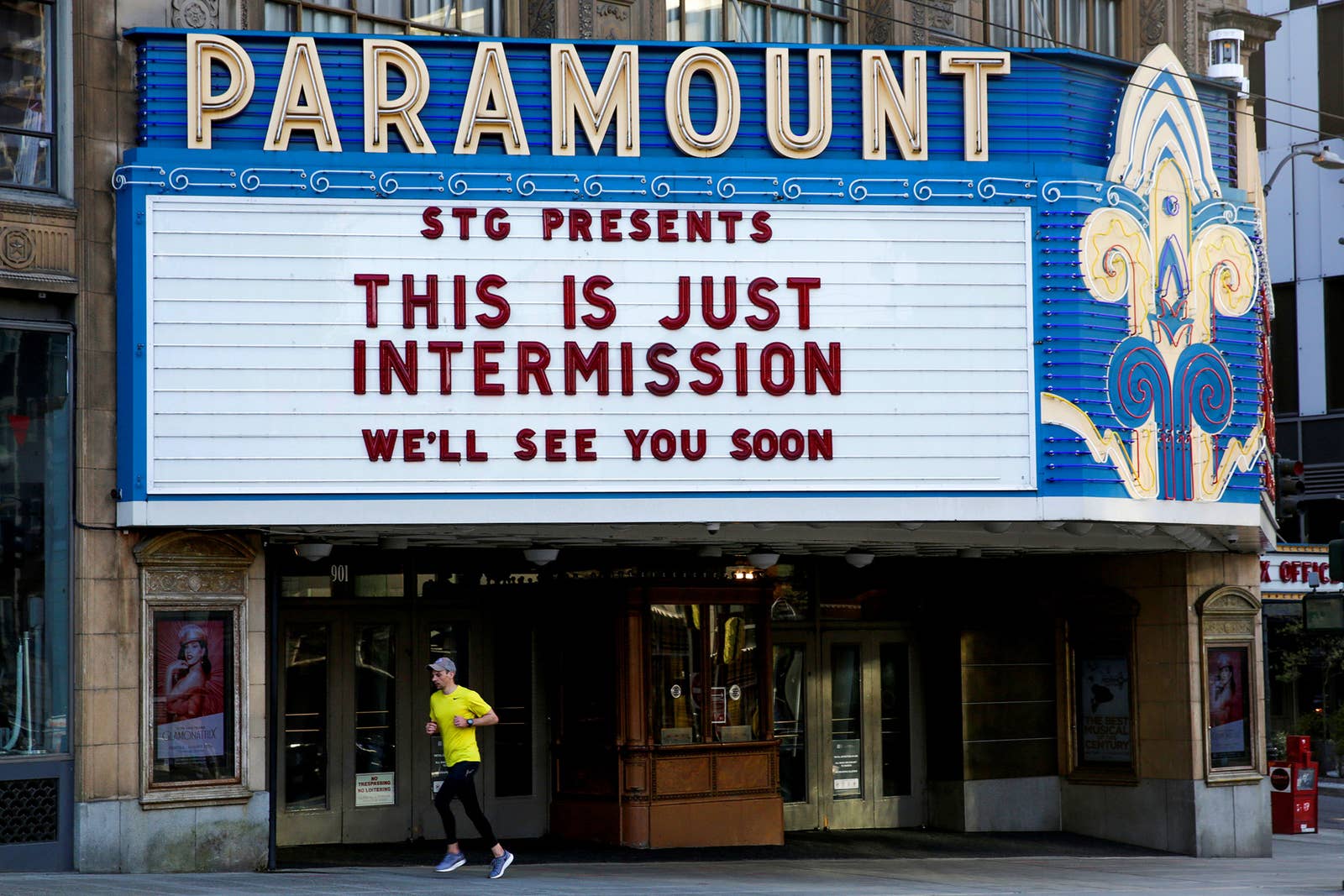 A pictorial week-in-review posted every Sunday right around this time.

1) A staff member preserves the Olympic flame to the lantern during the “Flame of Recovery” special exhibition at Aquamarine Park in Iwaki, Fukushima, Japan, March 25. It was announced the day prior that the Tokyo 2020 Olympic and Paralympic Games were postponed. Photo: Getty Images

3) A 17-year-old who asked not to be named wears a yellow hazmat suit, gas mask, boots, and gloves as he walks with his family, from Gaithersburg, Maryland, under cherry-blossom trees in full bloom along the tidal basin in Washington, D.C., on March 22, 2020. “I’m not worried for me since I’m young,” says the 17-year-old. “I’m wearing this in case I come into contact with anyone who is older, so that I won’t be a threat to them.” He plans to wear his protective outfit for the coronavirus each time he leaves the house. Photo: Jacquelyn Martin / AP

6) A Red Cross worker checks on a homeless person lying on a step near the Colosseum in Rome, Italy.  Since the coronavirus crisis, Red Cross workers have been increasing their daily activities to meet the growing needs of the homeless in Rome. With nobody around on the streets to give them food or money, and restaurants that would usually donate leftovers closed, homeless are struggling to find food and other supplies to keep them going. Photos: REUTERS/Guglielmo Mangiapane

7) A couple looks at a mobile phone as they sit in a car at a screening at a drive-through cinema in Seoul, South Korea, March 21, 2020. Photo: AFP

8) A park security guard wearing a protective face mask feeds a squirrel, following restrictions on access to city parks in an attempt to prevent the spread of coronavirus outbreak in Sofia, Bulgaria. Photo: Reuters

9) An Indonesian bride wearing a face mask is sprayed inside a disinfection chamber on her wedding day in Surabaya, East Java Province, Indonesia, in this photo taken by Antara Foto. Photo: Reuters

10) Father Scott Holmer of St. Edward the Confessor Catholic Church makes the sign of the cross while holding confession in the church parking lot on March 20, 2020, in Bowie, Maryland. Holmer, who sits six feet away from those in cars, holds drive-through confessions daily in the parking lot of the church because of the COVID-19 pandemic. Photo: Rob Carr / Getty

12) Juliette rings a ‘closing bell’ as NYSE-AMEX floor traders work in an off-site trading office they built when the New York Stock Exchange closed due to the outbreak of the coronavirus, in Brooklyn, New York City. Photo: REUTERS/Brendan McDermid

16) Gina Mares Kurtz, who lives in Seattle, takes part in a virtual kung fu class on Zoom with Seven Star Women’s Kung Fu while camping with her family to get away from the coronavirus outbreak at Fort Worden State Park in Port Townsend, Washington. Photo: REUTERS/Brian Snyder

22) A saleswoman at the Schuerener Backparadies Bakery shows a tray of cakes wrapped in fondant to resemble toilet paper rolls, in Dortmund, Germany. Photo: AP

23) Coba the Spectacled Owl is brought to see the Humboldt penguins while the zoo is closed to visitors at the Woodland Park Zoo in Seattle, Washington. Photo: REUTERS/Lindsey Wasson

24) Optician and former science educator Ali Nelson, jobless after her Washington D.C.-based eyewear store closed due to coronavirus, poses with her pet tarantula Polly at her home in Burke, Virginia. Photo: REUTERS/Kevin Lamarque