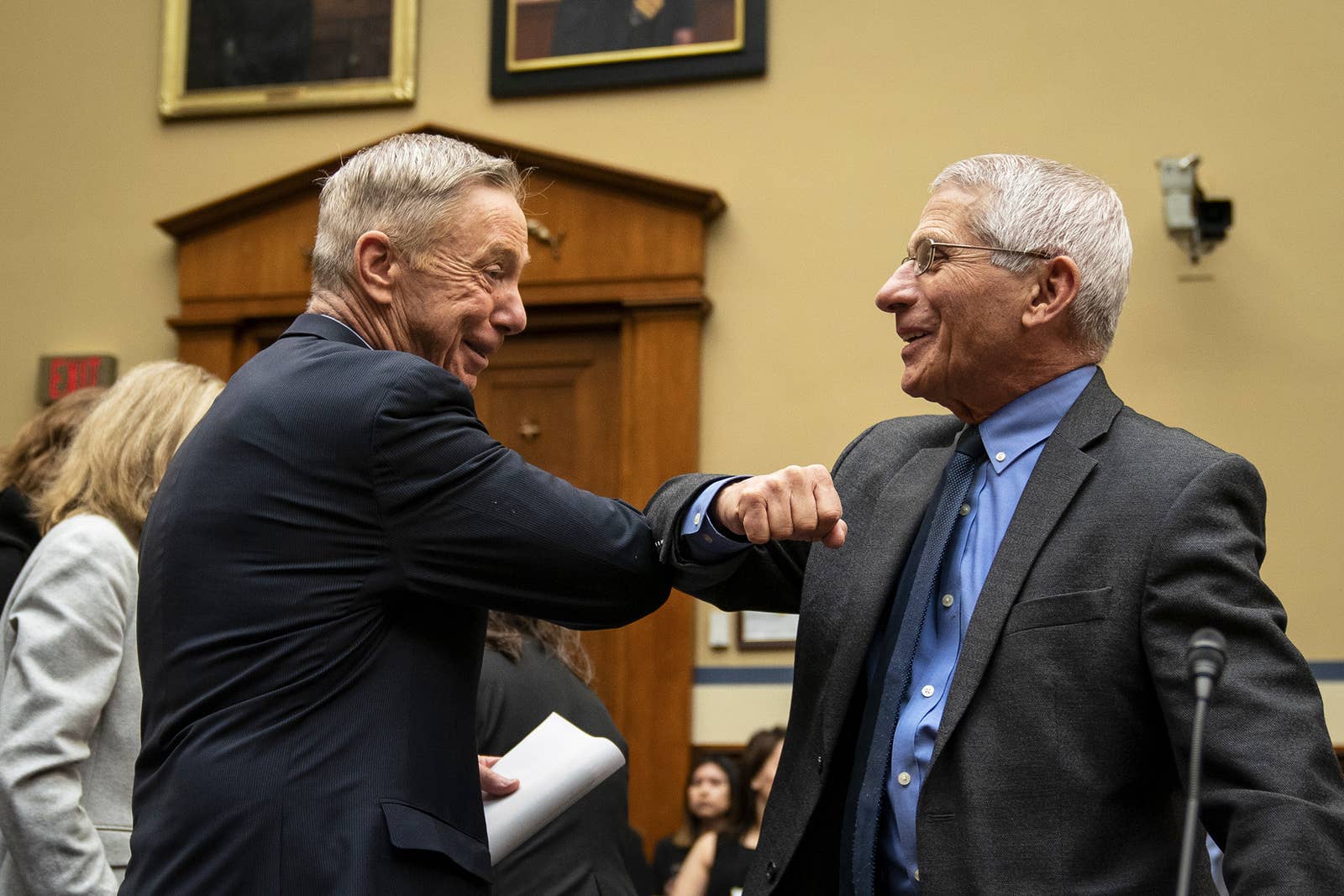 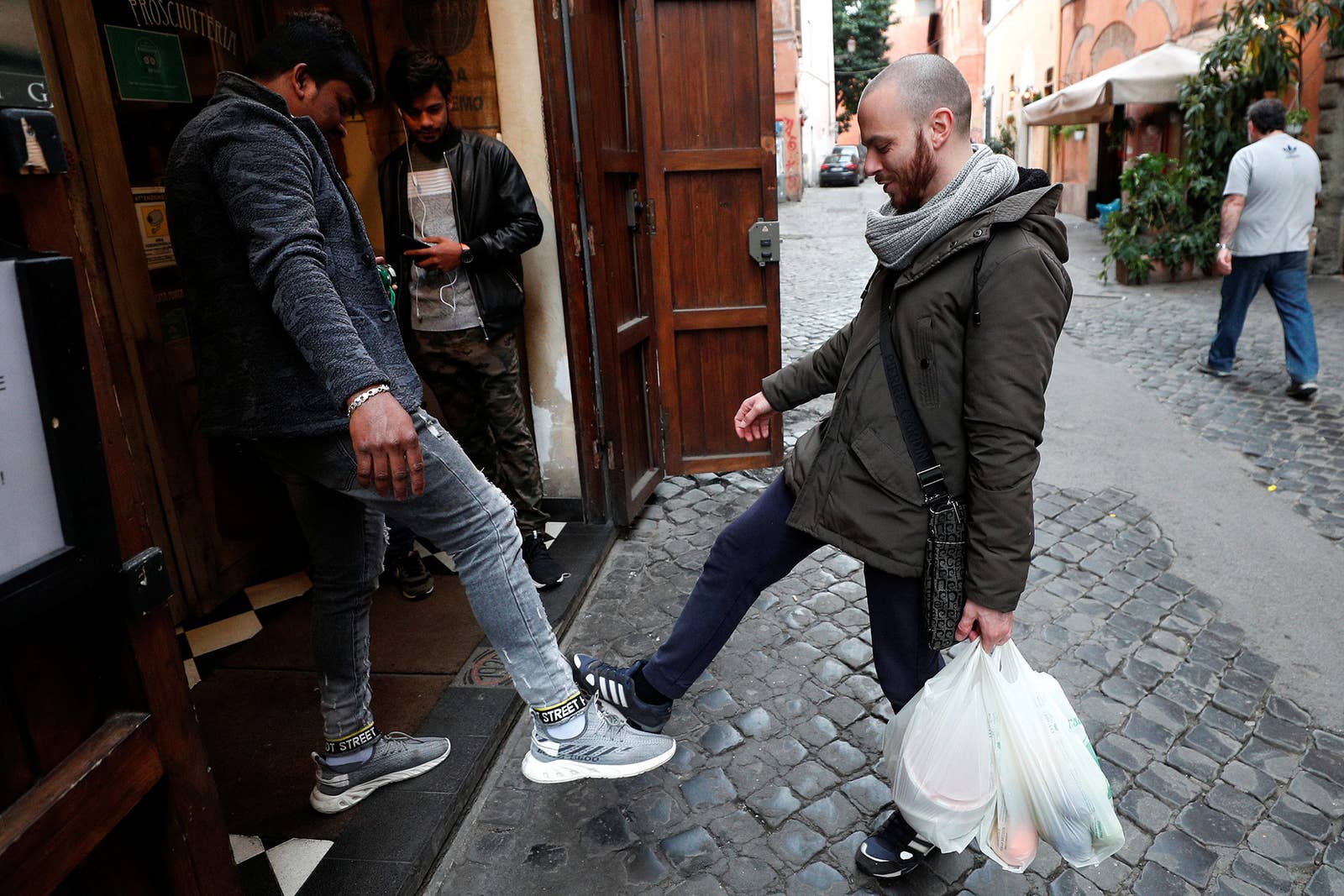 1) Judie Shape (center) who has tested positive for the coronavirus, blows a kiss to her son-in-law, Michael Spencer (left). Shape’s daughter, Lori Spencer (right) sits as they talk on the phone from opposite sides of a window at the Life Care Center in Kirkland, Washington, near Seattle, March 11. Photo: AP

2) Harvard sophomore Jordan Di Verniero, 19, sits with her belongings in front of Eliot House before returning home to Florida for the rest of the semester, on March 12, 2020, in Cambridge, Massachusetts. Students have been asked to move out of their dorms by March 15 due to the coronavirus risk. All classes will be moved online for the remainder of the spring semester. Photo: Maddie Meyer / Getty

3) Inmates stage a protest against new rules to mitigate the coronavirus emergency — including the suspension of visits from relatives — on the roof of the San Vittore prison in Milan, March 9. Photo: AP

4) An Iranian man uses a provided toothpick to press an elevator button in an office building in Tehran on March 4, 2020, as a preventative measure against viral transmission. Photo: Atta Kenare / AFP / Getty

5) Cleaning crews from Servpro have their masks wiped down as they emerge from the Life Care Center of Kirkland, the long-term-care facility linked to several confirmed coronavirus cases in the state, in Kirkland, Washington, on March 11, 2020. Photo: Karen Ducey / Reuters

6) A nurse packs a nose swab after administering on to a patient in his car at a drive-in testing site for coronavirus (COVID-19) at the Regional Hospital Center in Liege, Belgium. Photo: Reuters

11) Pope Francis leads Mass via a video livestream in a chapel full of empty seats as part of measures to combat the spread of coronavirus, at the St. Martha House in the Vatican. Photo:  Vatican Media/ via REUTERS

12) Fans leave after an announcement that the Oklahoma City Thunder vs. Utah Jazz game is canceled just before the tip off at Chesapeake Energy Arena. Photo: Alonzo Adams-USA TODAY Sports

13) Signage regarding the coronavirus is seen on the stage door to the show Hamilton at the Richard Rodgers theater as Broadway shows announced they will cancel performances due to the coronavirus outbreak. Photo: REUTERS/Andrew Kelly

14) Fans stand outside of Goodyear Ballpark after the spring training game between the San Diego Padres and Cleveland Indians was canceled. Photo: Joe Camporeale-USA TODAY Sports

16) The seats are empty in Spanish Parliament’s lower house in Madrid because the chamber canceled its activities for a week after a prominent lawmaker from the upstart far-right Vox party tested positive for the COVID-19 disease. Photo: AP

17) Workers place a mask on a figure made for the Fallas festival in Valencia, Spain, on March 11, 2020. The festival, which was scheduled to take place on March 13, has been canceled due to the coronavirus outbreak. Photo: Alberto Saiz / AP

18) Residents look out from a window at a Holika Dahan effigy of the coronavirus demon, “Coronasur,” ahead of the Hindu festival of Holi in Mumbai on March 9, 2020. The coronavirus effigy will be set ablaze as part of the festival. Photo: Indranil Mukherjee / AFP / Getty

20)  Harvey Weinstein speaks as witnesses watch during the sentencing following his conviction on sexual assault and rape charges in Manhattan, New York City, in this courtroom sketch. “I feel remorse for all of the men who are going through this fight,” Weinstein, 67, told the court before he was sentenced, sounding unrepentant. Photo: REUTERS/Jane Rosenberg

21) A woman dressed as a priestess lights the Olympic flame during the a ceremony in ancient Olympia, Greece, ahead of the Tokyo 2020 Olympic Games, on March 12, 2020. Photo: Aris Messinis / AFP / Getty

24) A woman kisses an Alaskan Malamute named Arctictreks Black Sheep during grooming on day three of the Crufts dog show at the NEC arena on March 7, 2020, in Birmingham, England. Photo: Leon Neal / Getty

26) A man stands in front of the Skógafoss waterfall in Skógar, Iceland, on March 8, 2020. Photo: Hannah Mckay / Reuters

27) A man jumps for a photo at the opening of the Edge, the Western Hemisphere’s highest outdoor sky deck, in New York City on March 11, 2020. Photo: Angela Weiss / AFP / Getty

28) The Mammal Society has announced the winners of the Mammal Photographer of the Year competition, awarding the top prize to an amateur photographer from East London, Roger Cox, who captured a gutsy local fox staring him down through a car’s windscreen, looking for food.