Today’s read is from one of the best, Victor Davis Hanson, the Martin and Illie Anderson Senior Fellow at the Hoover Institution and the author, most recently, of The Case for Trump.

Donald Trump has at least five strong historical arguments for his reelection.

Add it all up, and if one looks at 2020 dispassionately and historically, the election appears to be Trump’s to lose.

Governor Evers Wednesday made a controversial veto of a GOP-approved major income tax cut bill that has angered many taxpayers across the state. That’s not just news. It’s arguably front page news.

In Milwaukee this morning the veto was understandably knocked off the front page.

And yet  a couple of papers found a way to make the shootings and the veto available on Page One.

But several WI papers decided not to put the story on the front page at all.

When we last checked in on the Franklin Common Council, Alderwoman Kristen Wilhelm had her undies in a bundle, huffing and puffing as she stormed out of the meeting on February 17th when she didn’t get her way. You really need to click that link and read up  because no one else is reporting what happened.

Other important notes came out of that meeting including the school system’s role in all this. In essence, their is nothing, despite the fact the proposal involves an elementary school and hundreds of kids, all of whom we’re told are in dire jeopardy if an expensive road extension isn’t built, even though no one knows how it’ll be paid for. Minor detail in Franklin. Princess Wilhelm said we always have the money or can find it. You know exactly what that means.

Early in the meeting and before it got testy (and newsworthy jsonline and mysouthnow!) Mayor Steve Olson said he talked with District Administrator of Franklin Public Schools, Dr. Judith Mueller. Summarizing and paraphrasing the conversation, Olson said, “They (school district officials) believe the best use of their taxpayer dollars is to put towards educating our students rather than building roads.”

Alderman Steve Taylor followed with some on-point discussion that has received little or no attention.

“This is their school. Where are they? Why aren’t they at the table?”

Someone should ask them, and they definitely owe answers.

Check out this photo: 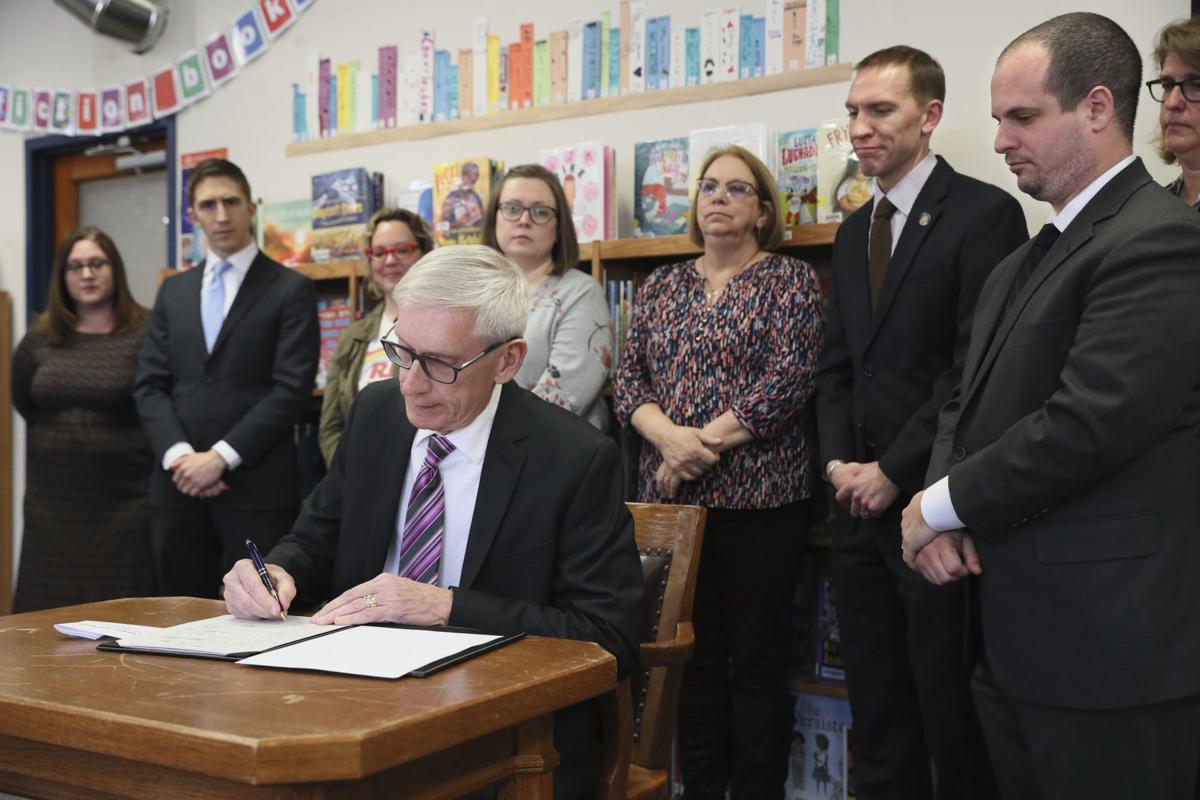 Gov. Tony Evers signs a veto on a tax cut bill that did not meet his spending priorities, as local Democrat lawmakers and others look on, during a press conference Wednesday at Lincoln Elementary School in Wauwatosa. PHOTO: Michael Sears, Milwaukee Journal-Sentinel via Associated Press.

Behind Evers, 3rd from right, smirking is state Senator Chris Larson (D-Milwaukee). He’s on the ballot in April for Milwaukee County Executive.

Parents United America is a non-partisan, non-profit organization created to connect ALL parents to solutions, resources, information and most of all, to one another.

The organization is led by Deborah Flora, an award-winning producer, national public speaker, and radio show host on the Salem Radio Network. She is the Co-Founder of Bring It Up Media, created to empower today’s women to be champions for their families, their communities, their country and their world.

Ms. Flora points to several frightening examples of how the government is quickly becoming not just a nanny-state, not just a bully of a big brother, but a god-like all-encroaching force set on destroying the family unit. Consider:

– Wisconsin parents are suing the Madison Metropolitan School District over a new policy that allows children of any age to change their gender identity at school without their parents’ knowledge.

Ms. Flora told me, “Most parents want what is best for the children. The question is, who gets to decide? Remote bureaucrats who don’t know the individual needs and unique personalities of each child? Or the parent who knows their children intimately, who understand what brings them joy and what keeps them up at night?”

The folks in charge of business development on Mitchell Street are in complete denial about the status of that street.

Today’s read is not political for a change. And that’s just fine. As the title of the blog suggests, a good column is a good column.

We revisit a part of the past when things as many say today were different, but in a good way. Trust me, as you read the entire column (and I hope you do), you will be prompted to admit, ‘Yep, I remember’: ‘Ain’t that the truth’; ‘That’s exactly the way it was’.”

Not picking up the phone would be like someone knocking at your door and you standing behind it not answering. It was, at the very least, rude, and quite possibly sneaky or creepy or something. Besides, as the phone rang, there were always so many questions, so many things to sort out. Who was it? What did they want? Was it for … me?

No one picks up the phone anymore. Even many businesses do everything they can to avoid picking up the phone. Of the 50 or so calls I received in the last month, I might have picked up four or five times. The reflex of answering—built so deeply into people who grew up in 20th-century telephonic culture—is gone.

There are many reasons for the slow erosion of this commons.

Read this story from FOX 6.

Did you get all that?

The question is: What 3 words are noticeably absent from that report?

But they certainly are a healthier choice than say, the Golden Arches.

A raspberry paczki from Sendik’s has 370 calories.