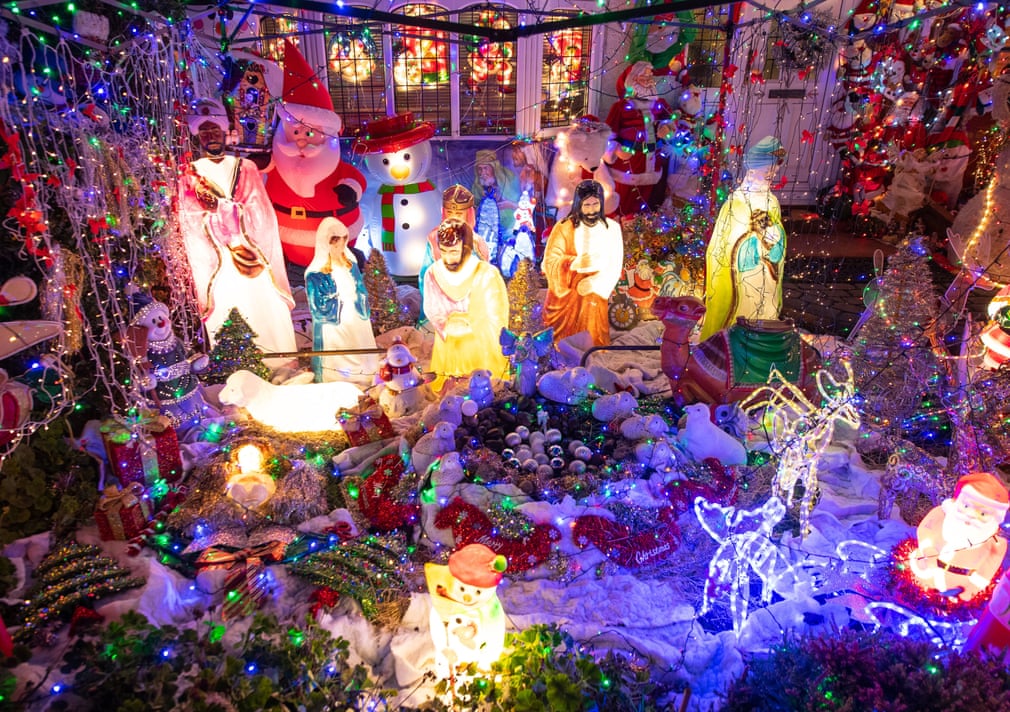 1) Speaker of the House Nancy Pelosi presides over Resolution 755, Articles of Impeachment Against President Donald J. Trump, as the House votes at the U.S. Capitol, in Washington, D.C., on December 18, 2019. The House of Representatives voted 229–198 on Wednesday to impeach Trump for obstruction of Congress. The House impeached Trump for abuse of power by a 230–197 vote. The 45th president is just the third occupant of the White House in U.S. history to be impeached. Photo: Saul Loeb / AFP via Getty

4) A woman wearing an anti Trump button listens to the actor and activist Jane Fonda during a luncheon at the National Press Club in Washington. Photograph: Olivier Douliery/AFP/Getty

6) In Tal Mardikh, Syria, members of the Syrian Civil Defence, also known as the White Helmets, recover a wounded girl from the rubble of a building after a reported Russian air strike. Photograph: Omar Haj Kadour/AFP/Getty

7) A woman reacts as tear gas is sprayed right into her face during a demonstration in Nantes, France.  Photo: AFP

8) In Mangalore, India, members of the Karnataka reserve police force swing their sticks at two men on a scooter who rode too close to a barricade, amid heightened security caused by protests against India’s new citizenship law. Photograph: STR/AFP/Getty

9) Wild boars gather in a residential area in the northern Israeli city of Haifa. Dozens of wild pigs have taken up residence after the city banned culling.  Photograph: Menahem Kahana/AFP/Getty

10) Field grass is seen coated in a layer of ice after a winter storm in Nyack, New York. Photo: Reuters

11) In St Kilda, Australia, a dog cools off under a shower at St Kilda beach as a heatwave sweeps across the state of Victoria. Thousands are without power as the state swelters, with just one day of respite from the hot weather before the mercury soars again on Friday. Australia has experienced its hottest day on record and its worst spring on record for dangerous bushfire weather, according to data released by the Bureau of Meteorology. Photograph: David Crosling/EPA

12) Children hold up statues of baby Jesus as Pope Francis blesses them during the Angelus noon prayer, which he celebrated from the window of his studio overlooking Saint Peter’s Square, at the Vatican, on December 15, 2019. Photo: Alessandra Tarantino / AP

15) People stand in front of Mario Leicht’s decorated house, in Walschleben, Germany, on December 17, 2019. Leicht decorates his family home every year. This year, there are probably 145,000 lights and about eight kilometers of light strings and tubes. Photo: Jens Meyer / AP

16) A Georgia family got a real hoot from their Christmas tree: more than a week after they bought it, they discovered a live owl nestled among its branches. Katie McBride Newman said on Friday that she and her daughter spotted the bird on December12. They had bought the 10ft-tall tree from a Home Depot, brought it back to their Atlanta area home and decorated it with lights and, coincidentally, owl ornaments. The family opened windows and doors near the tree hoping the owl would fly away, but it didn’t. So the family called a not-for-profit nature center for help. The Chattahoochee Nature Center caught the bird and helped the family release it. Photo: Billy Newman/AP

17) Actress Kelly Marie Tran poses for photographers upon arrival at the premiere for the film “Star Wars: The Rise of Skywalker,” in central London. Photo: AP

18) Chewbacca exits a car as he arrives at the world premiere of Star Wars: The Rise of Skywalker, in Los Angeles, California, on December 16, 2019.  Photo: Chris Pizzello / Invision / AP

19) Carley Argentieri is delivered a shot on a long pole while tailgating before the Green Bay Packers game against the Chicago Bears Sunday, December 15, 2019 at Lambeau Field in Green Bay, Wis. She is from Rochester, NY. Photo: Mark Hoffman, Milwaukee Journal Sentinel

Franklin ‘s Judy Harris Mantey, a good friend, recently visited family at the Nantucket Christmas Stroll. Judy was there with her sisters. Here’s another look. And another. Oh, what the heck. One more. A couple of these ended up in the local newspaper. Odd. I don’t see the husbands in any. Hmm. Photos: Facebook