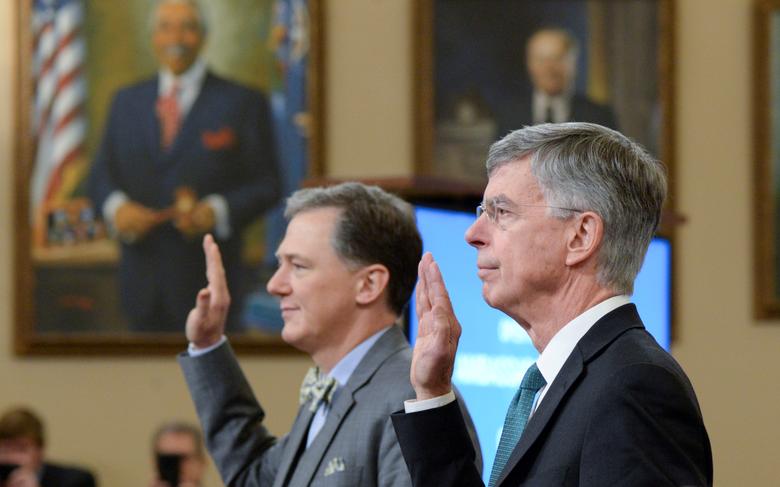 George Kent, the deputy assistant secretary of state for European and Eurasian affairs and William Taylor, the top U.S. diplomat in Ukraine, are sworn in during a House Intelligence Committee public hearing in the impeachment inquiry against President Donald Trump on Capitol Hill in Washington, November 13, 2019. The impeachment inquiry into President Donald Trump goes public with two diplomats making their appearance before the House Intelligence committee, both of whom have expressed alarm in closed-door testimony about Trump’s dealings with Ukraine. Photo: REUTERS/Erin Scott

If you only get your news from the mainstream media you would be led to believe that  President Trump is just about dead in the water. But there are other viewpoints and perspectives. Not everyone is of the “guilty first” opinion.

“A whistleblower alleged that Trump had shaken down the Ukrainian political leadership to investigate Hunter Biden’s board position on a Ukrainian energy company or risk having military aid withheld. The so-called whistleblower did not listen in on the call, it’s all based on secondhand information, and Ukraine did get the aid.”
Matt Vespa, Townhall.com

“Taylor held THREE meetings with Zelensky, NOT ONCE were Biden or Burisma brought up.”
Elizabeth Harrington, Republican National Committee

“Both of the Democrats’ star witnesses just confirmed that they were not on the call…So, they have nothing to offer?”
Jenny Beth Martin, Co-Founder Tea Party Patriots

“Truly remarkable. Rep. Mike Turner, a moderate and defense/foreign policy guru, is telling both witnesses that their testimony is hearsay and wouldn’t be allowed in a court of law. Guys, Rs are NOT going to vote for impeachment.”
Rachel Bade, Wash. Post Congressional reporter

“Bill Taylor, the Democrats star witness, has basically admitted today that he got virtually all of his hearsay info from Gordon Sondland. We have Sondland, in writing, admitting he really didn’t know what happened with Ukrainian aid. This is a farce.”
North Carolina Congressman Mark Meadows

“This sham hearing is not only boring, it is a colossal waste of taxpayer time & money.”
White House press secretary Stephanie Grisham

“I’m no expert and neither am I the smartest in the room (obviously), but my amateur analysis is: So far, the impeachment testimony has been a major bust for Democrats and has helped @realDonaldTrump. Also, I assume few minds have been changed.”
Sharyl Attkisson, Nonpartisan Investigative Journalist

“I guess to close, primer on hearsay, I think the American public needs to be reminded that countless people have been convicted on hearsay because the courts have routinely allowed and created, needed exceptions to hearsay.  Hearsay can be much better evidence than direct, as we have learned in painful instances and it’s certainly valid in this instance.”
Rep. Mike Quigley (D-IL) with a stunning pronouncement

“As the long-awaited public impeachment hearings kick off, one thing has become painfully obvious: the Democrats are in trouble. They have gone all in on their quest for impeachment and now they have to deliver, not just to their base, but to the country. After three long years of promising proof of Trump’s corruption, collusion, and contempt for the very basic institutions of our government, Democrats now have to turn over their cards and show the country what they have. If they can’t produce a smoking gun, if they don’t have a knock-out punch, then their party is in serious trouble.”
Paul Curry lives in Arlington, VA where he practices government contract law and FOIA law

“As the American people continue to witness the biased manner in which Democrats are handling the impeachment ‘inquiry,’ they are growing more and more skeptical about the ongoing campaign to oust President Trump.”
Katrina Pierson is a senior adviser for Donald J. Trump for President Inc.

“For the millions of Americans viewing today, the two most important facts are the following. Number one, Ukraine received the aid. Number two, there was in fact no investigation of the Bidens.”
Republican Elise Stefanik of New York