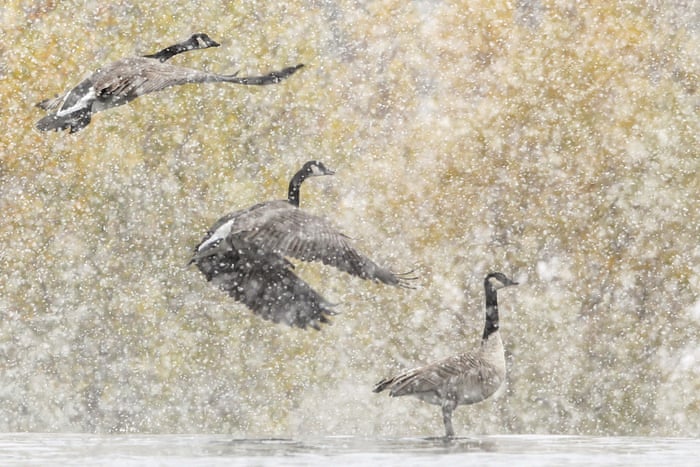 1) Fox News Bret Baier and CNN’s Jim Acosta stand for live shots on their respective live shows at the White House in Washington. Moments before, the White House had released a letter saying that it would not cooperate with the impeachment inquiry, calling it an effort ‘to overturn the results of the 2016 election’. Photo: REUTERS/Leah Millis

3) A member of the press reacts after being hit with a molotov cocktail during an anti-government rally in central Hong Kong. Photo: REUTERS/Jorge Silva

4) Patrick Crusius pleads not guilty during his arraignment in El Paso. The 21 year old stands accused of killing 22 and injuring 25 during a mass shooting at an East El Paso Walmart in the seventh deadliest mass shooting in modern U.S. history. Photograph: Briana Sanchez/AP

5) Jeffrey Manzanares, 33, lies in the intensive care unit of the University of Utah Hospital while being treated for vaping injury and other lung infections in Salt Lake City, Utah. Photo courtesy of Marisela Trujillo via REUTERS

6) First lady Melania Trump meets with teens on their experience with vaping as part of her ‘Be Best’ initiative at the White House in Washington. Photo: REUTERS/Erin Scott

7) Teenage girls and boys were seen crying tears of joy as the US president talked about his win in the 2016 election to a 20,000-strong crowd in Minnesota. Here’s another look. Photos: Reuters and AP

9) Police motorcycles lead a procession ahead of the casket carrying New York City Police Department officer Brian Mulkeen from his funeral service at the Sacred Heart Church in Monroe, New York, on October 4, 2019. Mulkeen was killed while making an arrest, when another police officer inadvertently shot him. Photo: Mike Segar / Reuters

10) Pope Francis smiles at a baby dressed up as himself during his weekly general audience at the Vatican. Photograph: Vatican Media handout/Reuters

11) Victor, a nine-year-old white-tailed eagle equipped with a 360 camera, flies over glaciers and mountains in Chamonix, France, during a preparation flight of the Alpine Eagle Race, an event aiming at raising awareness on global warming, in this still image taken from a video released to Reuters on October 8, 2009. Photo: Eagle Wings Foundation/Chopard/Handout via REUTERS

14) A woman and her husky share a moment during a dog exhibition in Bishkek, Kyrgyzstan, on October 5, 2019. Photo: Vyacheslav Oseledko / AFP via Getty

17) A reproduction of Michelangelo’s The Last Judgment is installed before the opening of an exhibition at Hull Minster in England. Photograph: Danny Lawson/PA

18) A creation titled “Tulips Bouquet” by the U.S. artist Jeff Koons is displayed next to the Petit Palais on October 4, 2019, in Paris. “Bouquet of Tulips” is a monumental work in bronze, stainless steel, and aluminum polychrome, 10 meters high and eight meters wide, weighing 27 tons, offered to France by Koons to pay respect to the victims of the 2015 terrorist attacks in Paris. Photo: Stephane Cardinale / Corbis / Getty

19) Former President George W. Bush and wife Laura walk off the field after participating in a ceremony with Medal of Honor recipients in the first half of an NFL football game between the Green Bay Packers and Dallas Cowboys in Arlington, Texas, Sunday, Oct. 6, 2019.  Photo: Michael Ainsworth, AP

21) Green Bay Packers’ Aaron Jones celebrates his touchdown against the Dallas Cowboys during the second half of an NFL football game in Arlington, Texas, Sunday, Oct. 6, 2019. Photo: Michael Ainsworth, AP

‘No photo is worth your life’