“Country music isn’t a guitar. It isn’t a banjo, it isn’t a melody, it isn’t a lyric. It’s a feeling.”
Waylon Jennings

This Sunday documentary producer extraordinaire Ken Burns opens his latest major project on PBS that can be seen on Channel 10 in Milwaukee. From the PBS website:

Explore the history of a uniquely American art form: country music. From its deep and tangled roots in ballads, blues and hymns performed in small settings, to its worldwide popularity, learn how country music evolved over the course of the 20th century, as it eventually emerged to become America’s music. Country Music features never-before-seen footage and photographs, plus interviews with more than 80 country music artists. The eight-part 16-hour series is directed and produced by Ken Burns.

Some great country music in this week’s installment, but first, a video. Of course, Nashville will dominate this series, but Oklahoma played a part as well.

We have some memorable country selections from the good ‘ole days, so let’s get started.

Elvis leads off. Are you surprised? The King of Rock and Roll never forgot his roots, even when Elvis was rocketing up the charts in 1958, the year he recorded his version of this Hank Williams classic.

Elvis and his producer Felton Jarvis cranked out many songs during several recording sessions in 1970 that resulted in the album  “Elvis Country” that was released on January 2, 1971. The King of Rock and Roll was inducted into the Country Music Hall of Fame in 1998.

The Beatles recorded several songs that had a country flavor, during that 1965 period, including “Act Naturally” with Ringo Starr doing the lead vocal.

“I used to love country music and country rock; I’d had my own show with Rory Storm, when I would do five or six numbers. So singing and performing wasn’t new to me,” said Starr.

“Act Naturally” was written by Johnny Russell and Voni Morrison, and first recorded by Buck Owens and the Buckaroos. It reached #1 on the Billboard Country Singles Chart in 1963. Two years later the Beatles recorded their own version.

“Some of (Ringo’s songs) we just couldn’t get behind,” said Paul McCartney. “I must admit, we didn’t really, until later, think of Ringo’s songs as seriously as our own. That’s not very kind but it’s the way it was…I think John and I were really concentrating on ‘We’ll do the real records!’ but because the other guys had a lot of fans we wrote for them too.” 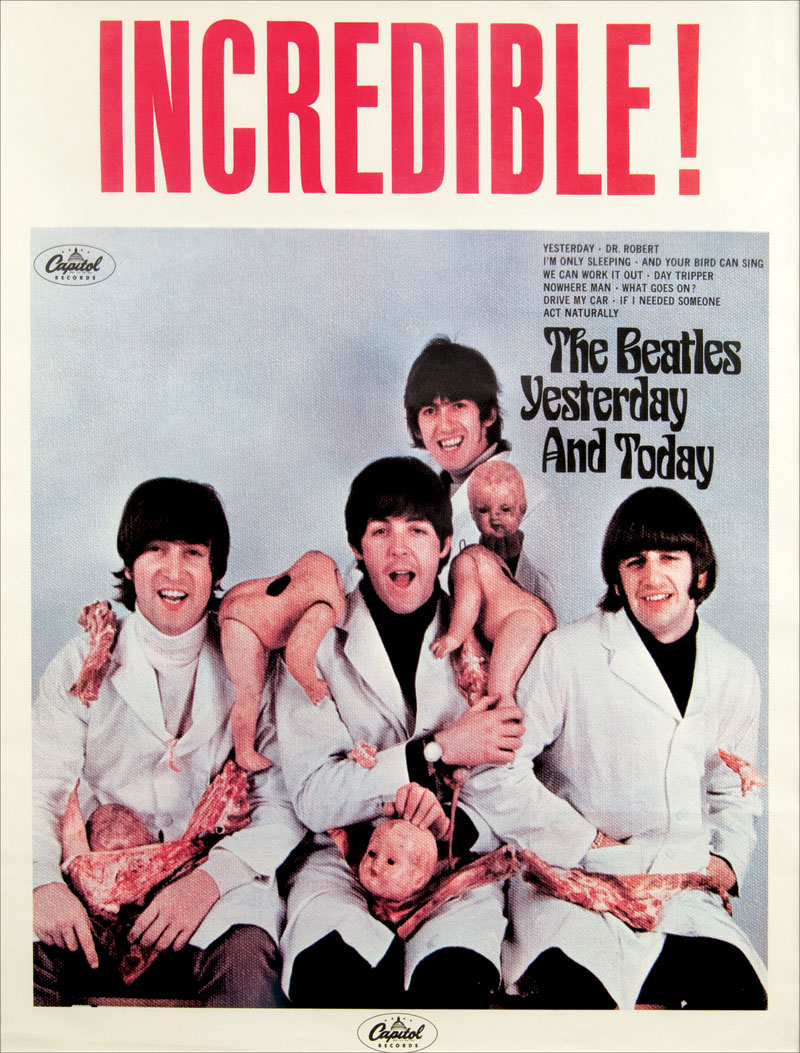 This would mark the last time the Beatles recorded a song not written by a member of the group.

“Yesterday” as a B-side? That was a mistake. Capitol did make the decision to release “Yesterday” from the British soundtrack album of “Help!” as a single and it turned out to be far more popular than Ringo’s solo vocal. “Yesterday” shot up the chart to #1 for four straight weeks. “Act Naturally” only reached #47 on the Billboard singles chart.

Oh, the above album cover. The original release of the album Yesterday and Today by the Beatles featured the so-called “Butcher cover” depicting the Beatles dressed in butcher smocks, surrounded by pieces of raw meat and plastic doll parts. A public outrage ensued and a more subdued design was produced replacing the original copies that quickly became collectors’ items.

In several polls this next song is ranked as the best country hit … ever. Kris Kristofferson wrote and recorded it in 1970, and it became a huge success for Sammi Smith.

Kristofferson and country singer Rita Coolidge were married from 1973 to 1979.

You know what yodeling is? Of course you do. Yodeling is when a singer repeats fast changes of pitch between a low-pitch register and a high-pitch register or falsetto. The style has been a part of country music history since the 1920’s so maybe it’ll get a mention in Ken Burns’ documentary.

The TV show is “Star Search.”

The host is Ed McMahon.

His guest sings a Marty Robbins smash from 1961.

Bill Mack wrote “Blue” in 1958. Rumor has it that he did so for Patsy Cline, but when she died it wound up many years later with Rimes.

Not true. Mack said he never wrote the song for anyone in particular, including Cline.

For as long as I can remember I’ve heard that jazz is America’s only true art form. Milwaukee’s own Woody Herman said that on stage all the time. This documentary intends to add country to the list.

“There’s something that we do in our culture in which we’re OK with sentimentality and nostalgia. I don’t know why, but that’s the enemy of good anything. We’re frightened of real, deep emotions. So we mask [discussions of country music] with jokes about pickup trucks, dogs, girlfriends and the beer. When in fact it’s about elemental things: birth, death, falling in love, out of love, seeking redemption and erring and all the things human flesh is heir to. That’s the stuff country music is about.”
Ken Burns

We close with an all-star cast and country classic that was written in 1907.

2 thoughts on “Goodnight everyone, and have a weekend with feeling”