I love MAGA hats. It identifies bad people quickly and allows us to avoid them. It’s far easier to just know who’s a cruel person from a distance than to let them in and learn they’re terrible later after they’ve already caused harm.

And disclaimer to avoid the conservative victim card game. Yes, I’m sure there are one or two “nice” people in my town who wear the MAGA cap. But why should my family go through pain and struggles to find the one or two when the vast majority of trump supporters are just rotten people?

So yeah, MAGA caps are convenient as all get out. They’re all awful people and I get to avoid them if they wear that cap! I hope they keep wearing them!

Also on the same thread: 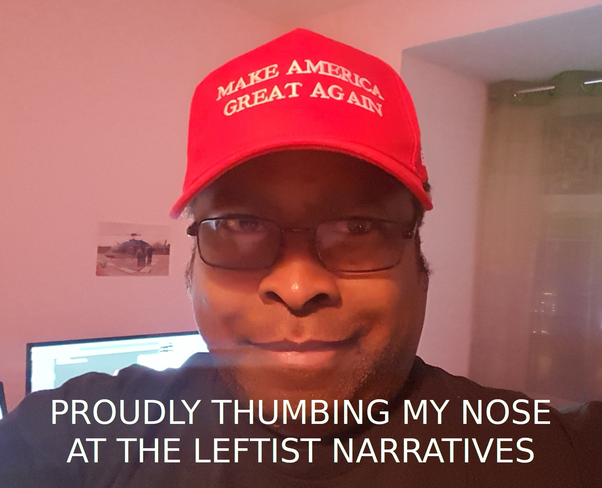 Does that make me a “bad person”, as at least one responder seem to indicate? Or, does that simply make me someone who loves to irritate the racism and bigotry that has so consumed the left and the Democrats today?

If someone cannot respect me for having a mind of my own and my own political opinions, what should I say to such a person?

I refuse to become an NPC for the left. Absolutely not. No, notta, nicht. Ain’t happenin’.

BTW, NPC stands for “non-player character,” a human that is unable to think objectively.

Given the outrageous violent leftists out there one can understand the reluctance to wear a red Trump hat. That’s why it was refreshing to read earlier this year a guest opinion in the Tennessean by Ryan Moore:

I’m very proud to wear my MAGA hat. All of the official MAGA hats are made in the USA. The hat is a symbol of wanting to put America first and wanting products to be made in America and wanting them to be made by Americans.

Moore, as you can read here, has paid the price.

And what about these?

I had Trump stickers on the arse end of my vehicle in a university city and it’s lucky not to be torched.
Found on Facebook

Afraid your car will get keyed or windows smashed?

put your Bumper stickers on magnet like a refrigerator sticker. You can take it off when you park.