This is a slightly revised edition of a blog done in 2012:

According to the National Hot Dog and Sausage Council, hot dog season ends on Labor Day having begun on Memorial Day. During that time, Americans gobble up 7 billion hot dogs or 818 hot dogs every second.

If you want a great hot dog, you’ve got to go to a Major League Baseball park. Good gracious, I don’t know what it is, maybe the atmosphere, but they always seem to taste notches better at a ballgame, like Arlington Stadium where the Texas Rangers play.

Over at PNC Park in Pittsburgh … 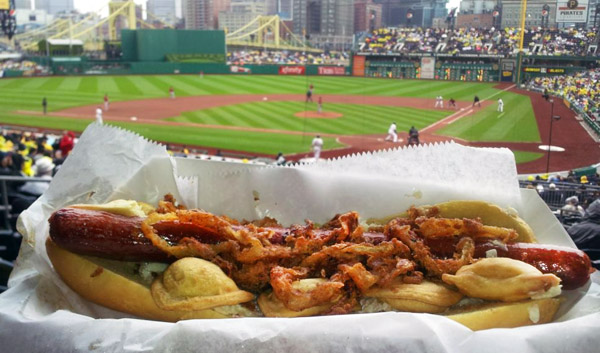 The Polish Hill Dog is an all beef footlong grilled and topped with mini potato pierogies, coleslaw and homemade onion straws served on a potato roll.

Personally, I’d prefer the slaw on the side, but that looks mighty good!

At Busch Stadium in St. Louis…

So far, Doppler Radar does not detect a no-no. But then again, regular readers know you sometimes have to get to paragraph 87 before there’s even a hint of an infraction.

During my exhaustive research for this week’s installment, I called upon a resource I occasionally depend on for important guidance.

Her first response was beer.

“What kind of or particular beer?”

The ribs/bbq-focused blog, www.amazingribs.com says this about beverage pairings with dogs:

“So what are the dominant flavors of a hot dog? In the frank itself, salt, garlic, spices, and beef are strong. Chili dogs can be heavily spiced, usually with Greek flavors such as cinnamon, allspice, and nutmeg. In the condiments, the sharpness of the onion and mustard are factors. So are the acidity of the kraut, pickle, peppers. Relish and slaw are sweet. French fries are fatty and salty.

“Nothing balances saltiness like beer. Among beers, I prefer ales because they tend to be richer than lagers and a little sweet. The local brews are always my first choices.

“The carbs of the bun and fries do a good job of absorbing the sharpness of mustard, so I look for sweetness to further tame things. Lemonade is a winner, countering the salt and spice nicely.”

And then my bride offered another possibility, a Vinho Verde.

Dearest Jennifer who is the sommelier in our house explained. Vinho Verde is typically a budget-friendly, low-alcohol white wine from Portgual. It’s crisp, it’s dry, and captures a light fizz by injecting carbonation, sort of like a soft drink.

Alright, let’s see what that ribs blog says about that.

“I favor the pink wines, sometimes called rosé, blush, or blanc de noir wines. They usually have a hint of sweetness, and often a slight fizziness. Gewurztaminer, which is spicy like the frank, is also a nice accompaniment.”

OK. Wine with hot dogs. I don’t get it, but I’ll listen to the experts. My guess given that I don’t have completely pedestrian swill-like tendencies is that if you’re going to imbibe in the grape with a dog, there must be a right way and wrong way.

This is above my pay grade so to learn the proper wine-weiner pairings we turn to Ray Isle. Isle happens to be Food and Wine’s executive wine editor.

The politics of corn dogs at the Iowa State Fair