THERE ARE ALL KINDS OF FOOD BLOGS, BUT ONLY ONE CULINARY NO-NO!

“It took Rep. Alexandria Ocasio-Cortez’s visit to the border  – and her dishonest comments afterward – to help me understand how profoundly vicious, cruel and dishonest she is. When you look at the larger picture, it is clear that Ocasio-Cortez, D-N.Y., is eager and determined to undermine and destroy America as we have known it. When your goals are that radical, lying is simply part of the game. When you despise American values and find the American people ‘deplorable’ and contemptible, lying is perfectly natural.”
Former House Speaker Newt Gingrich

Then there’s this perspective:

“Can anyone really take AOC seriously? She has demonstrated that she lacks the capacity for logic and reason. She carries such ignorance of, and hatred towards, the very issues she claims to be offended by. She formulates conclusions despite her want of reasoning and creates out of thin air ‘facts’ to support such pre-ordained conclusions.

“What is fortunate for America but disastrous for the Democratic majority in the House is that AOC is their loudest and most public voice. The Democratic Party is inexorably linked to AOC and her public rants and hysteria. When middle America’s John Q. Independent walks into a voting booth in November 2020, ambivalent about each candidate on his ballot for Congress, the (D) next to a person’s name will not evoke thoughts of FDR or JFK but of AOC. This is destined to end the Democratic majority.

“So, God bless AOC. Keep her safe. Keep her loud. Most importantly, keep her as the face of the Democrats right up to and through November 2020. But for the love of humanity, and the respect for rational thought, just don’t take her seriously.”
Paul M. Curry lives in Arlington, VA where he practices government contract law and Freedom Of Information Act law

Yes, the America-hating mental pygmy is the focus of this week’s Culinary no-no.

Ocasio-Cortez tended bar and worked as a waitress in Manhattan’s Union Square in the time leading up to her primary victory over incumbent Joe Crowley on June 26, 2018. 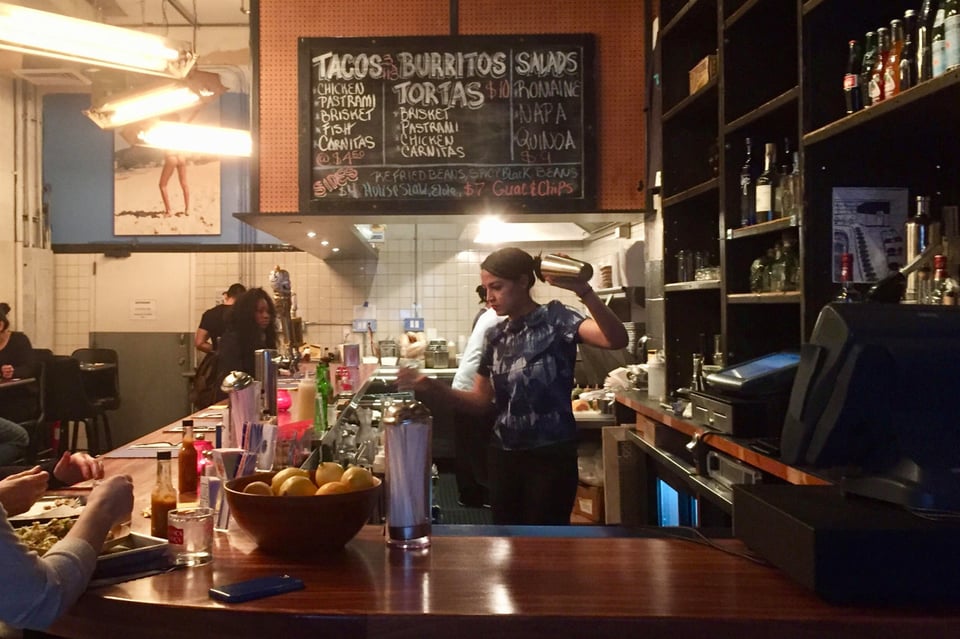 That’s her working at a Mexican restaurant months before defeating Crowley and being elected to the US congress.

Some on the right have played on that portion of Ocasio-Cortez’s resume.

Fox News’ Tucker Carlson went after her ridiculous Green New Deal exclaiming  “a 29-year-old former bartender” is being used by MSNBC “to teach you about science.”

So did President Trump.

And of course, there’s been an abundance of insults in social media.

The self-identified democratic socialist responded, “I’m proud to be a bartender. Ain’t nothing wrong with that.”

Coming to Ocasio-Cortez’s defense on Eater.com is Jenny G. Zhang who writes a glowing piece that also examines the problems associated with the service industry.

Apparently if you bring up, simply mention “bartender” in the same breath as Ocasio-Cortez, you’re classist and sexist.

By now, Ocasio-Cortez’s history in the service industry — she bartended and waitressed for years after graduating college, before becoming the youngest woman ever elected to Congress at the age of 29 last year — is the stuff of legend, an origin story for a superhero-like figure many have come to regard as the future of the left. Since Ocasio-Cortez won her primary against Democratic Party heavyweight Rep. Joe Crowley one year ago, “bartender turned politician” has more or less become her epithet, an easy phrase to use in headlines to signal the sheer unexpectedness of her meteoric rise — and apparent novelty of her service background.

Tossing those cards around like Zhang does is an easy game to play, and quite frankly, a tired, old exercise.

No one demeans hard-working individuals. That includes bartenders and wait staff.

This is a good time to repeat Culinary no-no #18:

I’ve never been a waiter, and judging from the impolite and condescending attitude of many customers, I don’t think I’d ever want to be.

Many diners I’ve observed seem to have never heard of the words, “Please,” or “Thank you.”

Some customers are downright bullies.

I recall seeing a table of patrons at a casual restaurant complain to the owner when the waitress didn’t come to the table quickly enough in their opinion. Their complaint didn’t have merit in my opinion. Even so, the manager fired the waitress on the spot.

On another occasion, I saw a middle-aged woman dining alone, dressed in fur coat and jeans. She apparently picked up a bottle of A-1 sauce and spilled some on her fur that she had not taken off. The woman was furious. She summoned for her waitress and launched into a verbal assault, claiming she should have advised her that the cap on the A-1 bottle was loose, that the restaurant would have to buy her a new coat, and that the waitress should be terminated. Despite the scene the woman created, she didn’t get a new fur coat and the waitress kept her job.

Being a waiter/waitress isn’t easy.

The Consumer Health Interactive reports, “Many people enjoy waiting tables for the good tips and lively human drama. But the job also serves up high stress, exhaustion, and a fat menu of kitchen hazards.”

Page Bierma writes that besides stress, servers face a plateful of problems:

Slippery floors that can lead to accidents

You can read Page Bierma’s entire column, “Waiting for a Living.”

So the job is difficult. It’s also thankless. You’ve got complaints about waiters and waitresses? They’re not always thrilled with you.

The late restaurant critic of the Milwaukee Journal/Sentinel, Dennis Getto wrote the following in 1996:

We’ve given restaurant gripes a lot of coverage over the last month.
It all started Jan. 14, when I wrote a column about practices that aggravated me, such as being ignored or not being served water.

Then readers responded with their complaints: mishandled drinking glasses and coffee cups, and vacuum cleaners running under the table while they were finishing lunch. There’s a third take on the restaurant world, and it comes from the workers who have to deal with the public daily – the waiters, waitresses and managers whose job it is to keep diners satisfied and coming back.

I hadn’t realized how tough the business can be until I heard from workers who read my original gripe column. They weren’t as numerous as the diners who sounded off, but they made some good points.

Doris Janke, who will mark her 20th year as a waitress at what is now Bakers Square in West Allis this November, took me to task for criticizing waiters and waitresses who ask, “Do you need change?” (I took it to mean they were automatically asking for a tip.) Janke set me straight by explaining that the question really means, “What kind of change do you want?”

“People often hand me a $20 bill,” she said. “I can’t guess whether they want singles or $5 bills.” So she asks the customers, and saves herself an extra trip back to the cash register.

Janke said that some servers handle silverware or glasses improperly but countered that with some of the unsanitary actions of customers. “People leave dirty diapers wrapped up in napkins or blow their nose on a napkin and then leave it on the table for the waitress or the busboy to handle.”

At Bakers Square, she said, dispensers in the kitchen hold anti-bacterial hand lotion, and she and the other waitresses use it frequently.

As for water not being served automatically, waitress Skaidrite E. Huttl reminded me that the practice got some of its momentum from Milwaukee’s Cryptosporidium crisis.

When the bacteria hit, she wrote, many folks stopped drinking their water and, subsequently, some places quit serving it. “But anyone who wishes may have a glass of water.”

As a waitress in private clubs, Huttl also reported that she’s surprised how many folks don’t know their etiquette, such as what piece of silverware to use for a given course. It always helps to know that the shorter fork is for salad and the round spoon is for soup.

George K. Jones, a graduate of the Culinary Institute of America in Hyde Park, N.Y., has worked in many well-known restaurants in town, including the English Room, Grenadier’s and Mader’s. Now managing a private club, he offered some suggestions for diners who want to ensure good service:

“Please make reservations,” Jones said. “It allows the restaurant to staff properly . . . And if you aren’t coming, please call. And don’t make a reservation for 6 p.m. and then sit at the bar for an hour and ask to be seated at 7 p.m.”

“Tell your servers of any time constraints when you’re seated,” Jones said. Some diners will wait until 20 minutes before curtain time to tell the waiter or waitress that they have to leave for a show.

Pay attention when servers are telling you about the special. In some cases, Jones said, a server will have to repeat the soup of the day to a party eight times.

“If there’s something wrong, let us know right away,” Jones said. That way, the problem can be fixed. Too many people wait a week and then send a letter when they should have brought up the problem right away.

“The thing that restaurants want to do is satisfy their customers,” Jones said. “We can’t do that unless you tell us something is wrong.”
–Dennis Getto, Milwaukee Journal, February 11, 1996

Having said all that, the avalanche of criticism of Ocasio-Cortez is self-inflicted. She’s brought it on herself because she’s just not very bright. People in her own party think she’s loony and should shut the hell up.

Bartending isn’t easy. But it’s hardly proper training for a spot in the House of Representatives as Ocasio-Cortez plainly illustrates.

Confused about what to eat? Science can help

5 ways to avoid food poisoning during your summer barbecue