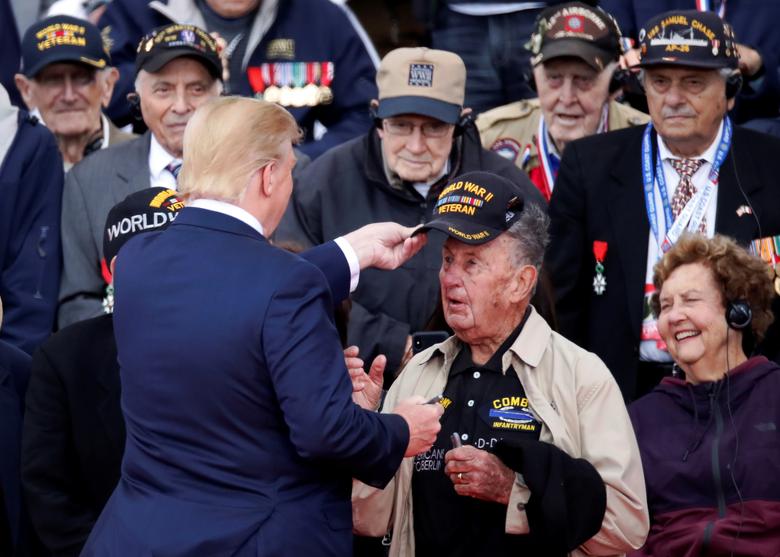 2) President Donald Trump and First Lady Melania Trump place a wreath on the Grave of the Unknown Warrior during a visit to Westminster Abbey on June 03, 2019, in London, England. Photo: Stefan Rousseau/WPA Pool / Getty Images

3) President Donald Trump’s message and his signature along with that of First Lady Melania Trump in the Westminster Abbey visitors book on June 3, 2019, in London, England. Photo: Jeff J. Mitchell/Getty Images

4) President Donald Trump and Queen Elizabeth II lead a procession of guests through the East Gallery toward the ballroom of Buckingham Palace for a state banquet on June 3, 2019. Photo: Victoria Jones/Pool/AP Photo

7) The President told the Queen: ‘It was a great honor to be with you’ and was heard saying: ‘Great woman. Great, great woman’ after saying farewell. Photo: AFP/Getty Images

8) A carefree Donald Trump walks off Marine One to board Air Force One before departing from Southampton Airport, as he bids farewell to Britain and flies to Ireland after his three-day state visit. Photo: AFP/Getty Images

9) The Trumps wave goodbye to the UK as they board Air Force One as they head to Ireland to meet Leo Veradkar. Photo: Reuters

10) President Donald Trump reaches out to touch a gravestone alongside first lady Melania Trump in the Normandy American Cemetery to commemorate the 75th anniversary of the D-Day landings in Colleville-sur-Mer, France on June 6. The cemetery contains the graves of over 9,600 U.S. soldiers killed on D-Day and in the Battle of Normandy. Photo: Carlos Barria / Reuters

11) Donald Trump and First Lady Melania Trump met veterans at an event attended by the Allies who all took part in D-Day. Photo: Getty Images

12) Veterans who survived D-Day were also guests of honor and are shown here saluting their fallen comrades at the event also attended by thousands of members of the public. Photo: AFP/Getty Images

14) D-day veterans including Richard Llewellyn and Mervyn Kersh from the UK, and Norman Duncan from the US, attend a ceremony at Normandy American Cemetery and Memorial above Omaha Beach, as France prepares to commemorate the 75th anniversary of the second world war landings. Photograph: Christian Hartmann/Reuters

16) A supporter of President Donald Trump reacts after being hit with a milkshake during a rally against Trump during his state visit in London, June 4. Protesters shouted, banged drums and waved placards at what organizers called a “Carnival of Resistance” in Trafalgar Square while Prime Minister Theresa May held talks with Trump a short distance away at her Downing Street residence. Photo: REUTERS/Clodagh Kilcoyne

17) University students clean the ‘Pillar of Shame’ statue, a memorial for those killed in China’s 1989 Tiananmen crackdown, at the University of Hong Kong, June 4, 2019. Photo: AP

18) Patricia Olds, a co-worker of LaQuita Brown, who was killed in a mass shooting at a VA Beach municipal building, is comforted before carrying a cross bearing Brown’s name to a makeshift memorial.  Photograph: Patrick Semansky/AP

19) Migrants from Guatemala are seen on the banks of the Rio Bravo river as they cross illegally into the United States to turn themselves in to request asylum in El Paso, Texas, as seen from Ciudad Juarez, Mexico. Photo: REUTERS/Jose Luis Gonzalez

20) NASA commercial crew astronauts Michael Hopkins and Victor Glover run through a training session at a replica International Space Station (ISS) at the Johnson Space Center in Houston, Texas, May 22. Space shuttle veterans Bob Behnken and Doug Hurley are slated for blastoff later this year or in 2020 from Cape Canaveral, Florida, in the debut manned flight of the Crew Dragon capsule to the ISS and back. Fellow astronauts Hopkins, 50, and Glover, 43, are designated for launch aboard the vehicle’s first official operational mission after that, possibly with two more crew members from other countries. Photo: REUTERS/Mike Blake

21) A worker sprays a bee swarm that has landed on a microphone, which caused a delay during the third inning of a baseball game between the Miami Marlins and the San Diego Padres in San Diego. Photograph: Kelvin Kuo/AP

22) A wild sika deer in Nara, Japan. The town’s free-roaming deer have become a major tourist attraction, but an autopsy one deer found 3.2kg of plastic in its stomach. Photographs: Carl Court/Getty Images

23) A humpback whale breaches in a lagoon off San Francisco Bay, where it has been for more than a week. Photograph: Justin Sullivan/Getty Images

27) As part of the Brewers’ #KindnessInMKE event, Christian Yelich checks out and buys groceries for Kristin Matz of West Milwaukee and her daughter Kaylee at the Pick ‘n Save at 2201 Miller Park Way. Photo: Michael Sears, Milwaukee Journal Sentinel

28) Brewers principal owner Mark Attanasio ran the checkout register, while Ryan Braun bagged groceries for the customers and they both paid for those groceries. Photo: Michael Sears, Milwaukee Journal Sentinel

31) Paul McCartney greets a sold-out crowd Saturday at Lambeau Field for a stop on his Freshen Up Tour. It was the 76-year-old music legend’s first performance in Green Bay. Photo: Sarah Kloepping/USA TODAY NETWORK-Wis.

“There’s no disrespect for the animal.”

And you get to buy stuff!!