This week the topic is about the one that started it all. Brats.

Oh, so you think you’re such a smarty. You’re figuring this installment just has to be about bad brats, don’t you?

Well let’s suppose the scholar in you is absolutely correct. We can’t just wrap up in a paragraph or two. That wouldn’t be the Culinary no-no way. Onward we go to see if you’re right. And you very well could be.

The NY Times once called Sheboygan “the capital of the kingdom of bratwurst.” Brat preparation there is a religion. Two bratwursts are usually squeezed into one hard roll,  side by side.

This brat is served Sheboygan-style at the Old Fashioned in Madison.

Traditionalists may protest, but the fact is brats have become like vodka. Or ice cream. There are numerous varieties and flavors with no solitary method of cooking. Everything is on the table. Here are just a few examples. Remember there’s a no-no lurking.

Not sure if that one is still available now that the clock struck midnight on Giannis and Co. 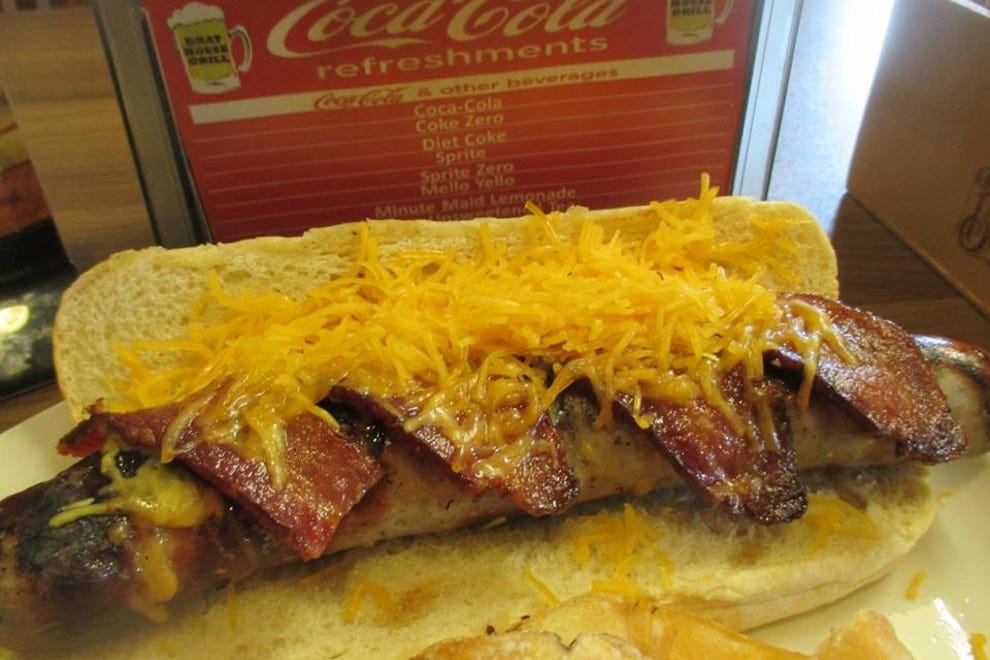 The Vanguard in Milwaukee makes their sausages fresh in house – all twenty of them – including vegetarian and vegan options. Above is the Bunkhouse, a Bacon Wrapped Cheddarwurst with Guacamole, BBQ, Cheddar, and Fried Jalapeño.

Bunzel’s is a family-owned and operated Milwaukee meat market four generations strong with a dedication to delivering consistent quality products. Bunzel’s offers traditional brats but gets creative with their other homemade sausages. A customer favorite is the honey mustard brat, and other options include three cheese chicken, Reuben-style and Texas popper bacon brats.

If you’re anywhere near or in Watertown I highly recommend a stop at Glenn’s Market.

Glenn’s already started their “Brat of the Week” schedule back in April. Talk about your variety.

Back to the Milwaukee Brat House. On the left you have a veggie brat topped with avocado sport peppers, olives, and a spicy mustard.

THAT’S GOTTA BE IT.

WE KNOW YOU, KEVIN!

Well, you’re right. That kind of brat will never find its way on my grill. Never. But it’s not the no-no this week.

Time once again to bring on Culinary no-no’s favorite philosopher.

In one “Happy Days” episode Fonzie remarked about ketchup and ice cream. When they’re separated, AYYYYY, thumbs up. But put them together…yuckimundo.

The Internet can be a great thing. Need a food idea or recipe? Go to Google. Search. In a  second you have oodles of considerations. I came across a crazy concoction this past week that was called “a match made in heaven.” I don’t think so.

The drawing card is that it’s low-carb.

Please contact me if you find this anywhere in Wisconsin.  I doubt you will.

My apologies to any Sheboyganite reading who’s probably spitting at the screen.

Teens thought they found a way around school cafeteria food — but no.