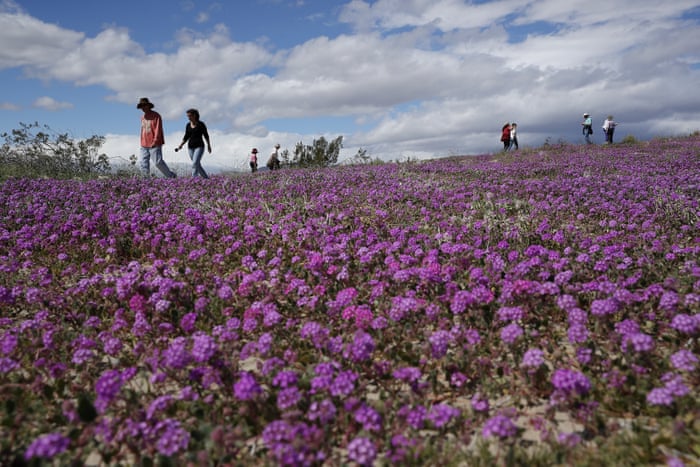 1) Residents retrieve personal items from the damaged home where they survived a tornado a day earlier, in Alabama. Photograph: David Goldman/AP

2) A house with an X painted on it is seen across a hillside of wreckage after deadly back-to-back tornadoes, in Beauregard, Alabama, March 4.  Photo: REUTERS/Elijah Nouvelage

3) U.S. Senator Martha McSally (R-AZ) speaks during a Senate Armed Subcommittee hearing on preventing sexual assault where she spoke about her experience of being sexually assaulted in the military on Capitol Hill in Washington. Earlier in the hearing, McSally said she had been raped by a superior officer and felt “horrified” by how her experiences were handled. Photo: REUTERS/Joshua Roberts

7) A feminist activist shouts into a microphone during a rally for gender equality and women’s rights in St. Petersburg, Russia, on March 8, 2019, as International Women’s Day is celebrated around the world.  Photo: Olga Maltseva / AFP / Getty

8) The former NBA basketball player Yao Ming, a delegate to the Chinese People’s Political Consultative Conference (CPPCC), towers over other delegates as they arrive at the Great Hall of the People to attend the opening session of the CPPCC in Beijing on March 3, 2019. Photo:Andy Wong / AP

10) A rainwater reservoir overflows into a fan-shaped waterfall in Guilin, Guangxi, China, on March 5, 2019. Photo: Barcroft Media via Getty

11) A child dressed as the pope cries during the weekly Angelus prayer at St. Peter’s Square at the Vatican on March 3, 2019. Photo: Tiziana Fabi / AFP / Getty

13) The jockey Harry Kimber is momentarily trapped under his mount, West Chinnock, after a fall (both the horse and jockey were okay) at the last hurdle at Wincanton Racecourse in England on March 7, 2019. Photo: Alan Crowhurst / Getty

14) An Old English sheepdog is groomed during the second day of the Crufts dog show in Birmingham, England, on March 8, 2019. Photo: Hannah Mckay / Reuters

15) In Frankfurt, Germany, Jenny, a 22-year-old Arab mare, inspects a baby. The horse’s owner opens the stable door for her every day and she has a sign on her halter reading ‘My name is Jenny. I’ve not escaped, just taking a stroll.’ Photograph: Boris Roessler/AFP/Getty Images

16) In Cali, Colombia, a woman has fun with a pair of pigeons at the Boulevard of the River on the eve of International Women’s Day in Cali. Photograph: Ernesto Guzman Jr/EPA

17) A mural by Melbourne artist Cam Scale is seen painted on a grain silo in Devenish. Photograph: Quinn Rooney/Getty Images

19) The Orpheus Leviathan float, with smoke and fiber-optic lights, rolls down Napoleon Avenue in the 2019 Krewe of Orpheus parade in New Orleans, Louisiana, on March 4, 2019. Photo: Erika Goldring / Getty

20) In Schramberg, Germany, people ride homemade rafts down the Schiltach stream in a race as part of the town’s carnival celebrations. Photograph: Kai Pfaffenbach/Reuters