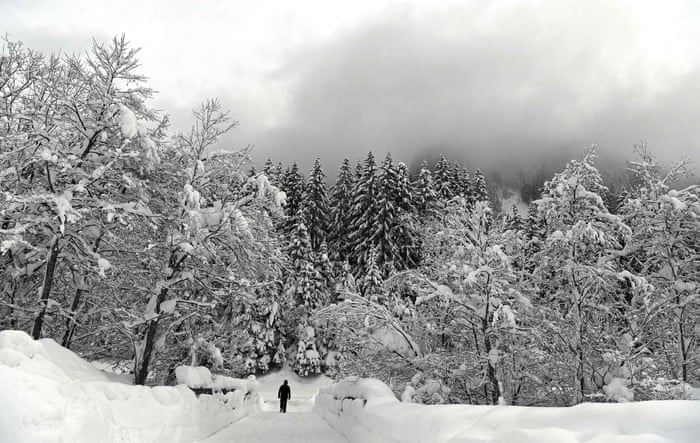 1) U.S. President Donald Trump delivers a televised address to the nation from his desk in the Oval Office, about immigration and the southern U.S. border on the 18th day of a partial government shutdown, at the White House. Photo: REUTERS/Joshua Roberts

2) People rally to call for an end to the partial government shutdown in Detroit, Michigan. As the third government shutdown of President Donald Trump’s tenure continues, political pressures on Trump and the Democrats have left little room for compromise in the standoff over funding for a border wall and the economic livelihoods of some 800,000 federal workers hang in the balance. Photo: AP

3) A woman records with her phone, as floodlights from the United States light up the border wall, topped with razor wire, Jan. 10, 2019, along the beach in Tijuana, Mexico. Photo: AP

4) Washington’s first and oldest synagogue, Adas Israel Synagogue, is moved via a remote-controlled platform to its new location where it will become the cornerstone of the Capital Jewish Museum on 3rd Street NW in Washington, D.C., on January 9, 2019. Photo: Kevin Lamarque / Reuters

5) A dismantled sign sits leaning outside a Sears department store one day after it closed as part of multiple store closures by Sears Holdings Corp in the United States in Nanuet, New York. Photo: REUTERS/Mike Segar

6) Workers shovel snow out of a restaurant after an avalanche at the Santis-Schwaegalp mountain resort, in Switzerland on January 11, 2019. Photo: Arnd Wiegmann / Reuters

7) The steeple of the Loferer church is seen through the deep snow in Lofer, in the Austrian province of Salzburg, on January 11, 2019, after a heavy snowfall. Photo: Kerstin Joensson / AP

8) As temperatures dropped to –20 degrees C (–4 F) in the Wulan Butong Grasslands, tourists tossed a cup of boiling water into the air, which instantly turned into ice and fog. Photographed near Chifeng City, Inner Mongolia Autonomous Region, China, on December 30, 2018. Photo: Costfoto / Barcroft Media via Getty

9) In Hwacheon, South Korea, a girl casts a line through a hole on a frozen river during the annual ice fishing festival during which about 20,000 holes are drilled in the ice. Photograph: Jung Yeon-Je/AFP/Getty Images

10) PH Sport’s driver Sebastian Loeb races against an airplane during a performance act at the Peru Dakar Rally in Lima. Photo: REUTERS/Carlos Jasso

11) In Hwacheon, South Korea, a man celebrates after hand fishing in a frozen river during an ice festival. Photograph: Jeon Heon-Kyun/EPA

12) A camel pops in for a treat from a shepherd after training in Van, Turkey, on January 8, 2019. Photo: Ozkan Bilgin / Anadolu Agency / Getty