I must admit I (and many others I’m sure), are quite jealous of Taylor. He’s nearing the end of an 18-day extended vacation in Maui, Hawaii. Above he’s seen at Waianapanapa Black Sand Beach, Waianapanapa State Park, in Hana, Hi.

For the past few weeks Taylor (talk about a snowbird) has agonized Facebook followers with photo after photo about his travelogue in the 50th state. The only way it could have been more excruciating was if he had posted shots of him in a swimsuit 🙂

I’ll admit I have enjoyed the very nice photos, having been in Maui myself, the last time during a three-island honeymoon with Jennifer. My curiosity was high in case we ever return. Are there spots we should patronize?

For example, Steve visited the Pioneer Bar & Grill with his parents.

We’ve been to Maui but not that place. Hope to try someday.

Lots of great places to eat on Maui.  Like the Paia Fish Market.

I’ll take all of the above.

So where the heck is the no-no?

Take a look at another plate you can easily find in Hawaii. 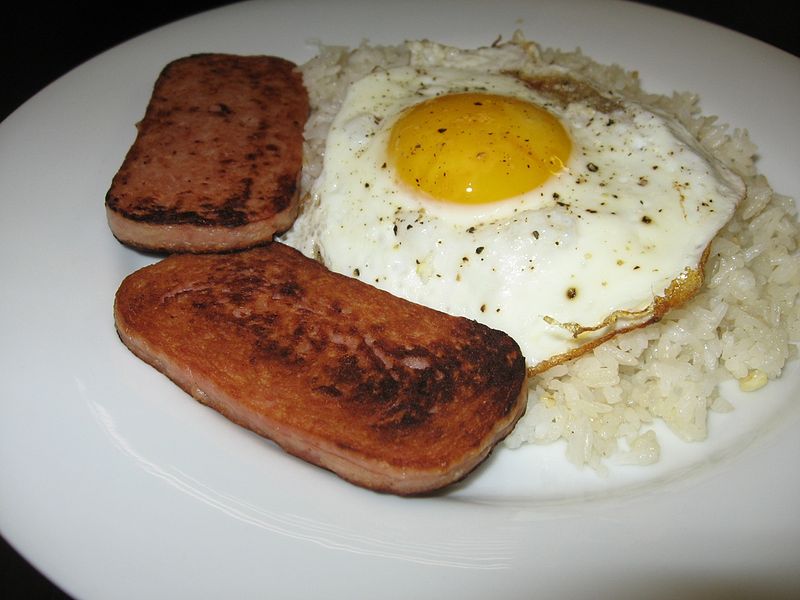 You’ve got your eggs, rice, and…

The company that’s been around since 1936 says its product stands for Sizzle. Pork. And. Mmm.

There are several varieties.

Spiced ham, hmm. Funny. Tastes nothing like the stuff that comes off our Weber Grill on Easter.

Hawaii holds the distinction of consuming the most SPAM of any state in the nation, seven million cans a year.

To this day, Hawaiians love Spam Musubi, a sushi-style slice of Spam served with rice and seaweed, spam fried rice, and my dad’s favorite, spam and eggs.

Spam is so popular throughout Hawaii that it’s been nicknamed the “Hawaiian steak” and is even found on the islands’ McDonald’s and Burger King menus. During the last week of April, the annual Spam Jam takes place in Waikiki.

Toby Tamaye, marketing director for the Spam Jam says, “We have Spam dim sum, Spam katsu on a stick, Spam fries with dipping sauces. We have takoyaki and gyoza filled with Spam. We even have Spam popsicles, Spam cupcakes, Spam cheesecakes.”

I could stop right here, having made my point. But there’s more.

SPAM defenders point out that because it was the first canned meat product that didn’t require refrigeration, it was the ideal choice for soldiers’ rations during World War II and the Korean War.

The SPAM website proclaims, “This revolutionary new product won over the hearts of soldiers…”

My mom made SPAM for us when we were kids, but never, ever, ever for my dad.

My father served in the Army in WWII. He nearly had his legs blown off in an explosion, and had to spend 11 months in an Army hospital. Dad told me SPAM was definitely omnipresent, too much. SPAM was everywhere, so much that it sickened soldiers. During on train excursion Dad said G.I.’s were tossing the cans out the window.

I love Hawaii and the Hawaiian people. I’ll never understand their obsession with this junk. What’s that old saying? If you put lipstick on a pig it’s still a pig?

No matter how you jazz up SPAM, it’s still SPAM, which I don’t think I’ve had since I was 12 and will never eat again.