The WI State Fair this Sunday night will be a treasure trove of forgotten oldies.

Sunday at 7:00 it’s an evening of hits from the 60s and 70s with The Turtles, Chuck Negron formerly of Three Dog Night, Gary Puckett & The Union Gap, Mark Lindsay former lead singer of Paul Revere & The Raiders, The Association and our featured act on the oldie blog this week.

When the Beatles came to America lots of youngsters tried to emulate the Fab Four.

One family from Newport, Rhode Island, of brothers Bill on guitar, Bob on guitar and organ, Barry on bass and John on drums formed a band they called by their last name: The Cowsills, who started out playing at school dances, churches, and frat parties.

“Our first real break came when we were playing the MK Hotel in Newport (in the basement there) and a guy from the Today show saw us and asked if we wanted to be on the Today show,” said Bob Cowsill. “We weren’t famous or anything but we were young and we were related and we were quite good. So we went on the Today show (I doubt a tape exists of that but if it did it would be priceless to see) and someone from Mercury Records saw us which ultimately led to our signing with that label.”

And eventually The Cowsills ended up on MGM Records, but the label had a requirement. The band’s mother, Barbara, would have to be in the band. That didn’t go over too well at first.

Bob Cowsill said, “We go, ‘You’re going to put who in this band?’ This is like: ‘Are you nuts? You’re going to embarrass the heck out of us. We won’t want to go to school. What is going on?’ And then we have a hit record.”

When Mom came along so did 7 year old Susan and brother, Paul.

In 1968 The Cowsills did a TV special, “A Family Thing.” Here they’re introduced by Buddy Ebsen.

See if you remember.

Think that song would fly today?

The Cowsills were approached to do a TV series but it never materialized…for them. Producers had already signed someone else to play the mother of a family band.

Shirley Jones played Shirley Partridge in the ABC-TV series, “The Partridge Family” that ran from 1970 to 1974.

During that period The Cowsills broke up but over the years have frequently gotten back together to perform.

Susan Cowsill, the youngest in the band and the only girl, and her family lost their home because of Hurricane Katrina in 2005.  Barry Cowsill did not get out of New Orleans before the hurricane hit. He went missing for four months before his body was found and identified. Barry Cowsill was 50.

On September 13, 2004, The Cowsills gathered at the El Rey Theater in Los Angeles to perform a benefit concert for their oldest brother Billy who was battling a series of illnesses and injuries.

The day before Barry Cowsill’s memorial service the family learned that Billy Cowsill had died after problems with hip replacement surgery, back surgery, emphysema, osteoporosis and other health issues. He was 58.

Barbara Cowsill, the mom in the group, died of emphysema in 1985 when she was 56.

The Committee for the Nomination of The Cowsills for Induction to the Rock and Roll Hall of Fame has been formed, looking for fans to sign a petition to get the band into the Hall. The belief is that The Cowsills have met the criteria for induction including longevity, influence, innovation, distinction, and perpetuation.

Thanks for reading everyone.

Well, understood the blog has to end somewhere and the notes about the family deaths and the Hall of Fame Crusade seem to be an appropriate finish.

Yes, I thought so.

But you’d be forgetting something.

OK, but there’s a rather serious omission. You really want this highly informative and creative article to skip something so cool?

What were you thinking of?

Well, imagine if the Cowsills came to State Fair Sunday and didn’t sing it. You know. 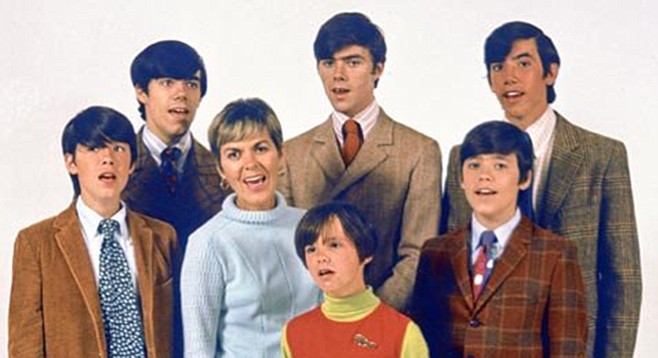