Back in April I took great joy in Culinary no-no #562 blasting Starbucks when it was accused of being racist.

I included a quote from Christine Flowers, a lawyer and columnist for the Philadelphia Daily News who summed up my feelings perfectly:

I’m kind of thrilled that a company that touts its liberal cred from the mountaintops has gotten a comeuppance. This is a place that waves the rainbow flag, that strongly supports Planned Parenthood and its mission to make America safe for “choice,” and that has been fairly clear about its position on the Trump administration. To be exposed for its lack of sensitivity to minorities is delightfully ironic.

Starbucks was in the news a lot this past week after it issued a statement on Monday:

Today, Starbucks Coffee Company (NASDAQ: SBUX) announced it will eliminate single-use plastic straws from its more than 28,000 company operated and licensed stores by making a strawless lid or alternative-material straw options available, around the world. Starbucks, the largest food and beverage retailer to make such a global commitment, anticipates the move will eliminate more than one billion plastic straws per year from Starbucks stores.

Starbucks has designed, developed and manufactured a strawless lid, which will become the standard for all iced coffee, tea and espresso beverages. The lid is currently available in more than 8,000 stores in the U.S. and Canada for select beverages including Starbucks Draft Nitro and Cold Foam. The lid is also being piloted for Nitro beverages in additional markets including China, Japan, Singapore, Thailand and Vietnam. In addition, Starbucks will begin offering straws made from alternative materials – including paper or compostable plastic – for Frappuccino® blended beverages, and available by request for customers who prefer or need a straw.

This is considered to be a rather big deal because, you know, plastic straws often end up in the ocean,  and you know what that means. You’ve got innocent sea creatures mistaking the straws for food who can get hurt. Surely you’ve seen that viral video of a sea turtle with a straw stuck in its nose.  For God sake people, we must ban, ban, ban!

Bless you, Starbucks. From the bottom of our liberal hearts, bless you!

NEWS FLASH: It is now cool to despise plastic straws.

At most, straws account for about 2,000 tons of the 9 million tons of plastic that are estimated to enter the ocean each year, according to the Associated Press—.02 percent of all plastic waste. The United States is responsible for about one percent of plastic waste entering the oceans, with straws being a smaller percentage still.

The new nitro lids that Starbucks will use to replace straws are made up of  MORE  plastic than the company’s current lid/straw combination.

But that’s not my favorite part of this Culinary no-no. NO NO NO.

Penny Pepper is a writer and disability rights activist. She writes in the Guardian:

I rely on plastic straws. I’m disabled – I have no choice.

I need straws that bend, ones that can handle all drinks, including medication, and all temperatures. I need straws that aren’t too fat, that won’t cause me to choke or be difficult for me to keep in my mouth.

In Seattle, where Starbucks is headquartered, disability rights groups sent  a letter to the Seattle City Council.

“Requiring people with disabilities to treat a routine fast food trip as something that requires planning and supplies is an unplanned failure in equity,” the groups wrote.

Some say they’ll have to take straws with them when they head to Starbucks.

Starbucks says “customers are still able to get a straw — made from alternative materials — and we will work with the disability community to ensure we continue to meet their needs going forward.”

Say you, you in the wheelchair. Wanna straw? Then just ask!

The next time I’m idling my car for 20 minutes at a drive thru for a strip mall Starbucks built atop a reclaimed wetland, I will feel a unique sense of satisfaction that they are protecting the earth from straws. 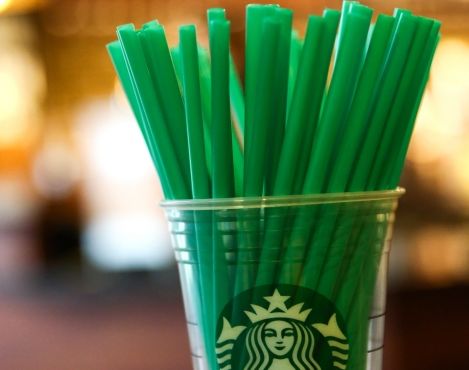