A new restaurant has opened in front of a local mall.

The local newspaper, the Grand Forks Herald sent its octogenarian columnist/restaurant writer to do a review.

I’m not a big fan of restaurant critics. The late Dennis Getto of the Milwaukee Journal might be the only one I genuinely liked (a lot) and read religiously. Most others I find consistently too negative and not all that helpful. Thus, I decide whether to patronize and see for myself if the experience is enjoyable.

But can a critic be too nice, to the point of being dull with writing skills of a 5th grader?

Milwaukee Magazine once wrote this about Milwaukee Sentinel restaurant critic Alex Thien, often a target of good natured jabs because of his rather soft style:

“In a day when nouvelle cuisine and Cajun cooking are the craze, the good old-fashioned pork chop remains the reviewing staple of Milwaukee Sentinel restaurant critic Alex Thien,” writes (Jim) Romenesko in “A Critic’s Penchant for Pork.” “Our ‘Al Thien Pork Chop Count,’ as we’ve dubbed this pseudo-investigative effort, seems to confirm this. We discovered that Al ate chops – an item few seem to be picking off the menu these days – in about 20 percent of his reviews in a recent 12-month period. Furthermore, he likes nearly 99 percent of the chops he tastes. Nearly all, he said, were lean, thick and cooked all the way through.”

That brings us back to Grand Forks and its brand new Olive Garden. Marilyn Hagerty, long time writer who was now in her mid-80’s gave one of those Alex Thien assessments in her review.

I wrote for two school papers in high school (I attended two different places). I’m guessing my editor/teacher would have been far more critical had I submitted that article than Hagerty was about Olive Garden. Some bland and rather safe excerpts:

The place is impressive. It’s fashioned in Tuscan farmhouse style with a welcoming entryway. There is seating for those who are waiting.

My booth was near the kitchen, and I watched the waiters in white shirts, ties, black trousers and aprons adorned with gold-colored towels. They were busy at midday, punching in orders and carrying out bread and pasta.

At length, I asked my server what she would recommend. She suggested chicken Alfredo, and I went with that. Instead of the raspberry lemonade she suggested, I drank water.

She first brought me the familiar Olive Garden salad bowl with crisp greens, peppers, onion rings and yes — several black olives. Along with it came a plate with two long, warm breadsticks.

The chicken Alfredo ($10.95) was warm and comforting on a cold day.

Hagerty had no concept of what was coming. This kindly old woman from a tiny Midwest town got flambeed from all over the country. Posted on fark.com:

As a fellow midwesterner I can say that though the Olive Garden here is by no means “the largest most beautiful restaurant in town” it is constantly busy. All day, every day. Never underestimate the desire of folks in the midwest to enjoy bland food.

The Olive Garden — What you get when General Mills decides to make a dining experience.

So much of that review read like mediocre fiction. It just needs a few tweaks to kick it up a notch.

Honestly, it reads like a column from the Onion.

I think it would be amusing to put a Sbarro in there too and watch their little noggins explode.

Just wait till they get a Bucca di Beppo.

This entire article reminds me of that Family Guy clip where an old guy is talking at a nursing home about how things used to be and an old guy in the crowd turns to his friend and says “I enjoy things I remember.”

“Grand Forks is the third-largest city in the state of North Dakota … [with a] metropolitan area [population of] 98,461.” ~Wikipedia. Yeah, I’d be excited about a new restaurant opening if I lived there, too. Anything to get the taste of lutefisk out of my mouth.

Not every reaction was a pie in Hagerty’s face. Soon she became a bona fide celebrity.

In this report we find Hagerty was quite humorous, and she also had opinions about guys like…me. Click here to watch.

Did you notice in that report that when Hagerty was getting sauteed, celebrity chef known the world over Anthony Bourdain no less came to her defense.

After meeting Hagerty for coffee when she was on a media tour in NY Bourdain published a book of her columns. 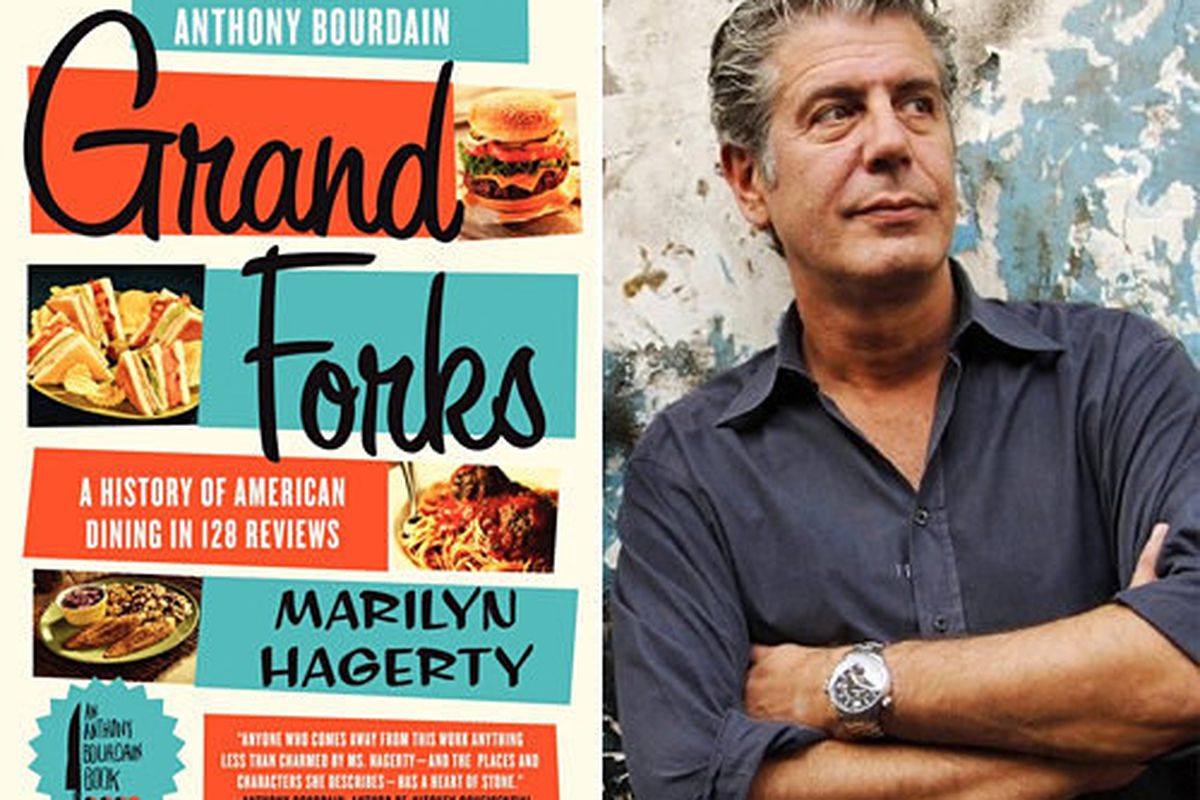 In the foreword, Bourdain wrote: ‘‘Anyone who comes away from this work anything less than charmed by Ms. Hagerty — and the places and characters she describes — has a heart of stone. This book kills snark dead.’’

Bourdain died of suicide earlier this month in France.

‘‘I am sorry that Anthony Bourdain died. I’m especially sorry about the way he died,’’ Hagerty told the Associated Press.

‘‘And, of course, I’m forever grateful for the fact that he chose to enter in and take up my side in the dispute that I had nothing to do with.’

‘‘You just would like to sit and have coffee with him, or booze, or whatever he’s having. To me, he was a warm person, and you liked to spend time with him because he was interested. He wanted to talk about me and my home … he just didn’t talk about himself and his interest in food. It was just like talking to a friend.’’

Lovely story. I mean it. And I don’t mean to be too harsh, but…

Hagerty’s been in journalism for decades. She opened herself  up for scrutiny with a review that read like it was written by someone in the business for 30 minutes, not 30 years.

Hagerty’s initial review of Olive Garden, the instant heat it received, her immediate elevation to celebrity, and the incredible media attention all made this a deserving and very, very cool story.

But critics are not Superman. They are not and should not be immune to what Hagerty went through, right or wrong, and believe me, it was nothing compared to what some writers are hit with.

I don’t want Hagerty to change her style. She just needs to know what might lie ahead with any given column.