Over a period of several days in early June 2008 I blogged and updated a series of photos chronicling the disaster on the old FranklinNOW website. The response was overwhelming.

Many of those photos have not survived the passing of time on the Internet. But here are some that did. 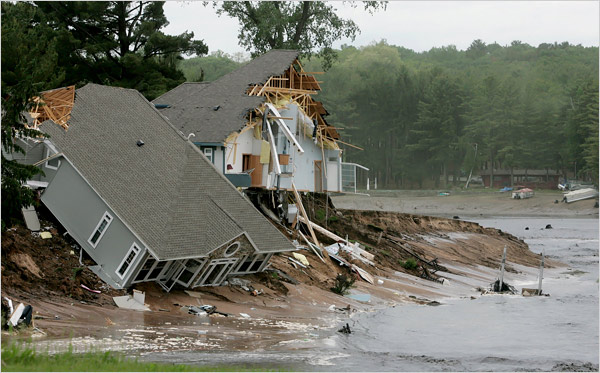 Residents walk through several feet of floodwaters to get to higher ground along Rocky Ford Road in Columbus, Ind. on Saturday, June 7, 2008. Hundreds of residents had to be rescued as floodwater shut off several areas throughout the city. The flooding resulted in one confirmed death and is estimated to have caused several millions in damges. (AP Photo/The Columbus Republic, Mike Dickbernd)

A fawn struggles against the fast flowing White River as it tries to walk along the levee on Monday, June 9, 2008 in Edwardsport, Ind. The fawn was swept off the levee, but managed to swim to a bank and make its way from the water. (AP Photo/Vincennes Sun-Commercial, Kevin J. Kilmer)

A stranded couple walk around the second floor of the Iowa Lodge above floodwaters with their infant child, Friday, June 13, 2008 in Coralville, Iowa. (AP Photo/Iowa City Press-Citizen, Matthew Holst)

An elderly man is rescued after high waters stalled his car, Friday, June 13, 2008 in Springfield, Mo. He was transported to a local hospital. Almost four inches of rain fell during the day.(AP Photo/The Springfield News-Leader, Dean Curtis)

(From left) Hunter Schultz, 5, and his brother Sam, 6, walk across a makeshift bridge with Pedro Novoa, who lives above the flooded MJ’s Liquor Store on Main Street in the town of Oconomowoc near the Rock River. (Photo: Rick Wood, Milwaukee Journal Sentinel)

Pat Ryan measuring water levels next door to his home in Lagrange, Mo., whose downtown area was flooded. His home, on the other side of the fence at left, was spared after he had placed sandbags and sump pumps around it. Photo: Todd Heisler/The New York Times

The inside of a car after it was abandoned in a flooded neighborhood near the Cedar River in Charles City, Iowa, on Monday, June 16. More than 500 homes in Charles City were damaged. Photo: Kevin Sanders/Associated Press

Rainbow overhead in Janesville as water is pumped out of basements. Photo: Marcia Straub

2 thoughts on “10 years ago this week, devastating floods in southern Wisconsin and the Midwest”