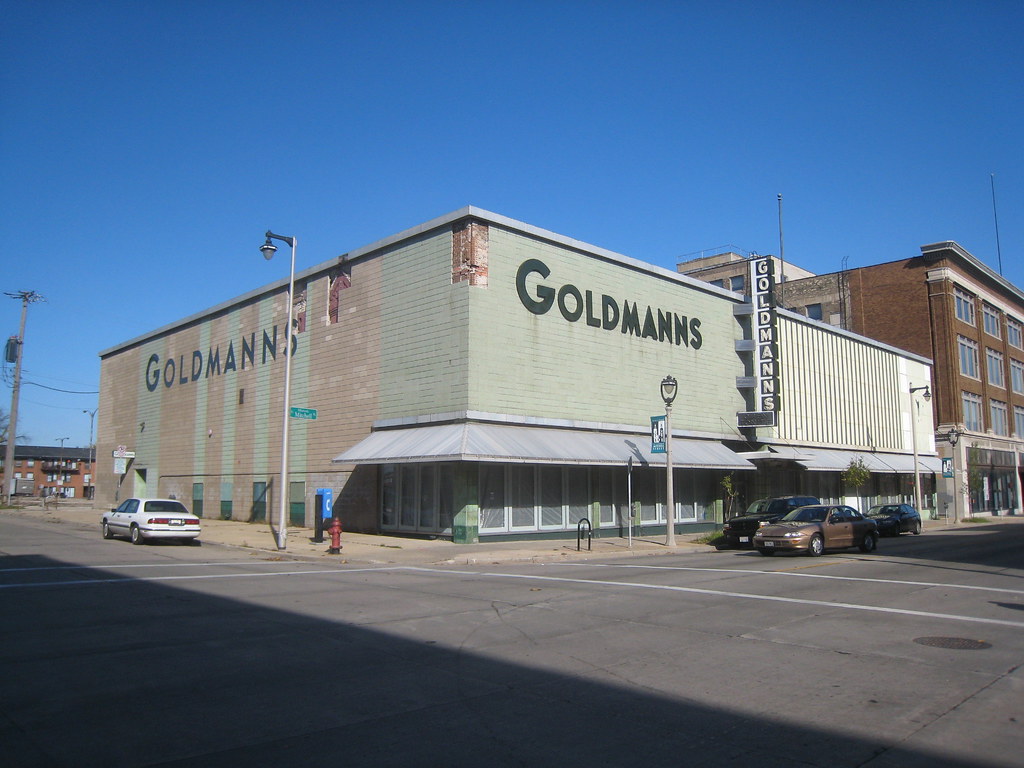 Goldmann’s is closing after 111 years of business.

That’s very sad. It would be even sadder if Mitchell Street, once more popular and prestigious than Wisconsin Avenue, hadn’t died a long, long time ago.

I can say that because I grew up in the shadows of the golden domes of St. Stanislaus Church, the multi-storied Kunzelmann-Esser furniture store and the trolleys and streetcars. I lived the beauty, the buzz, the splendor of fabulous Mitchell Street. I have witnessed the slow, sad deterioration of a once proud street. Every Sunday, I return to Mitchell Street to attend mass at the only church I’ve ever belonged to, St. Anthony’s Catholic Church at 9th and Mitchell, directly across the street from Goldmann’s.

When I was a youngster, Mitchell Street was the ideal Main Street.

On 6th and Mitchell, on the corner was a Grebe’s Bakery. Their bakery wasn’t the greatest, but someone working there was a PR genius. In the window, every day, all day, was a spinning rotisserie with chickens, just dripping with natural juices. Many customers walked in wanting a cruller, but left with poultry.

Next door to Grebe’s was what everyone affectionately called, the “Sweet Shop.” Janet ran the “Sweet Shop,” just Janet, who had a long multi-syllabic Polish last name. I called her Janet.

You talk about a kid’s dream. The “Sweet Shop” had EVERYTHING! You walked in and there were only two long narrow corridors. In the middle of the store, some shelves with the basic packaged grocery goods. I never paid much attention. On the left as you walked in were Janet’s freezers, stocked with ice cream, and ice cream, and ice cream. Keep walking and you get to the front counter, where you checked out. Behind the counter, honest to goodness malted milk machines and a big refrigerator with every soda imaginable.

On the right side of the store, okay, I’m dating myself, a large, long glass case with “penny” candy. That’s right. “Penny” candy. If you had a quarter (and you probably didn’t because as a kid the most you had was probably a dime) you could pick out 25 different one-cent pieces of candy, and Janet would patiently and painstakingly place each morsel into a small brown paper bag. After each selection, Janet would tell you how much you had left to spend.

Janet sold the store a long time ago and now lives in New Berlin, not far from the childhood home of my wife’s best friend. Janet still talks with my mom often about the good ‘ol days.

Next to the “Sweet Shop,” was the Juneau Theater. When I was 6, I saw King Kong vs. Godzilla there and was afraid to go home. All I could think of was some giant reptile attacking me. I also saw a bunch of Elvis movies at the Juneau and had my first experience with Jujubes and Good and Plenty and all those other cool movie candies. Oh, and the idiot movie usher that flashed his light on you if you had your feet up on the empty seat in front of you. (Jerk!)

Down the block was Anton’s (Call me Max) men’s shop. Anton or Max (I never figured out who) was 5 foot 5, 150 pounds and wore a bird feeder on his head. I had no idea that when I’d ride my bike on Mitchell Street around his shop, he’d come out and keep an eye on me and report back to my mom.

There was Piasecki’s Record shop right across the alley from Anton’s. At Piasecki’s, I had one of the greatest experiences of my life. (Granted, I was only 6 or 7). My older brother took me, and to this day I’m not sure if he did it willingly or was instructed by mom, to Piasecki’s.

I remember it like it was yesterday. The glass door opened, and 1, 2, 3 steps down to a long, long, narrow aisle of stacks and stacks of wax. My brother helped me find, “Devil in Disguise,” by Elvis Presley. I walked up to the counter and took out what I believe was about 30 cents to pay Mr. Piasecki, who sported an accountant’s visor and a cigar whose aroma filled the store along with all that wonderful vinyl.

I seem to recall a Holzman’s Fur store on that block. The owner had curly white hair, huge black horn-rimmed glasses, a moustache, and a face that never smiled. I didn’t like him at all. I made sure I pedaled extra hard when I rode my bike past his window with the dead animal around the woman dummy’s neck, biting its own tail. Mr. Piasecki’s cigar was far more appealing.

The famous, “Irv the Working Man’s Friend,” was down the block, right across the street from Kunzelmann-Esser, a furniture store unrivaled in all of Wisconsin. They had a walkway inside the front windows that allowed you to walk inside (or in my case, ride my bike) without actually entering the store.

On 8th and Mitchell, Mayer-Krom, a men’s store my mom always dragged me to when she had to buy a gift for dad. My uncle Claude designed the displays in their windows.

On 9th and Mitchell, my parish church to this day, St. Anthony’s, a church so beautiful it brings tears to first time visitors. Across the street was the original Knight’s Popcorn. After school you’d hit Knight’s and hope you had enough for a soda and a bag of corn. If you were lucky, you had enough left over for a Mallo-Cup.

Up Mitchell on 10th was the “dime store,” officially known as F.W. Woolworth’s. My future sister-in-law, Bernie, actually worked there. I’d park and lock my bike in the alley behind Woolworth’s every week and run down the steps to the basement where they had the week’s top 100 45’s all in a row, ready for purchase. I’d smile when my favorite records climbed the charts. I’d moan when a favorite started to drop. Why wasn’t I buying my 45’s at Piasecki’s? Piasecki’s had become a Mautz Paint store, and I lost all interest.

Next to Woolworth’s was the ultimate, Gimbel’s Schusters Department Store, floor after floor of really neat stuff, like the Tonka trucks in the toy department.

Kiddy corner from Gimbel’s Schuster’s was the Grand, a high class women’s clothing store where my godmother Auntie Anne once worked.

You had your Walgreen’s and Meurer’s Bakery and George Webb’s and an Oriental restaurant that mom said had the best egg foo yung, and a few “sausage stores,” and if you didn’t like what they were showing at the Juneau, you walked a few blocks to the Granada or the Modjeska theaters.

In the summer and fall, it was a must to hit the Farmer’s Market on Saturday’s where Mitchell intersected with Forest Home.

And I’d be remiss if I didn’t mention this unique bit of history from this special neighborhood. One block south of Mitchell is Maple Street. On the corner of 8th and Maple stood a single story red brick building, Graeven’s Bakery. This was the real McCoy. Grebe’s sold rotisserie chickens and mediocre donuts. Graeven’s was the cat’s pajamas of pastries.

But Graeven’s would do something unheard of on Friday nights in the summer months. All week long, the bakery would close up for the day around 5:00. Then on Friday nights in the summer, when the sun was down and evening darkness had arrived, a side door to the bakery on S. 8th Street would fly open. A baker clad in long white apron and white hat, full of flour would open that door to see a long line of people waiting in the hot, humid sticky night. These people should have been home sitting in front of a fan or parked near air conditioning. Instead, crazy south siders stood in line to get a chance to walk inside a hot steamy bakery to buy the only product on sale at 9:00……………hot rolls. You stood in line hoping and praying they wouldn’t run out before it was your turn.

My mother proudly talks about how she walked home with the bag of rolls held closely across her chest to keep them warm. When Mom arrived back home, though it was ungodly hot in the house, out came the butter, and we ate rolls.

Mitchell Street is, today, a busy street, but it’s nowhere near the same as it once was. There is an agency called the Mitchell Street Advancement Association whose job it is to promote and talk about the street in the most positive of terms. About 5 years ago, in the ultimate of “spin,” it announced Mitchell Street was enjoying a “renaissance.”

Please don’t insult me or my intelligence.

Not one of the stores I mentioned remains. There are no quality stores left. On the steps of the church I still attend every Sunday, a man was riddled with bullets. He bled to death in the arms of the parish pastor. At my church, the outdoor grotto on Mitchell Street is tarnished by garbage and litter tossed by irreverent and disrespectful punks. There are news stories of knifings and shootings, crime that was once unheard of on Mitchell.

Today, people who once did all their shopping on Mitchell Street drive by and keep driving. They reminisce and feel great pain and sorrow to see what has happened to this once wonderful street.

So Goldmann’s is closing. Yes, it’s sad. But it was bound to happen. Everything else that was truly great died on Mitchell Street a long time ago. Goldmann’s just happened to survive a lot longer.
—This Just In, June 1, 2007