The day was December 31 to be exact, New Year’s Eve. That morning I was filling in for talk show host Charlie Sykes. I thought I had most of my lineup figured out. But after reading the local morning paper I knew I had to add one more topic.

Smack dab on the front page was a nauseating hatchet piece on a New Year’s Eve tradition in our area, the cannibal sandwich. Absolutely no good for you. Why would anyone in their right mind even dream of indulging in raw beef and onions on rye. Have you ever seen that junk under a microscope?

When my show opened at 8:30 the article was the first subject out of the gate.

Yes, I opened up the phones. Yes, the newspaper, not surprisingly, was out of touch.

People were ticked. Hogwash they cried.

My favorite caller was an elderly gentlemen who claimed to be 90. He had been eating raw beef for decades. I believe he mentioned cigars and booze, too. Nary a health issue, and by God that New Year’s Eve night he planned on a cannibal sandwich or two, damn the Journal Sentinel.

Now, for sure, I am biased. I love those babies, on that cocktail rye, with enough salt and pepper to add some zest. 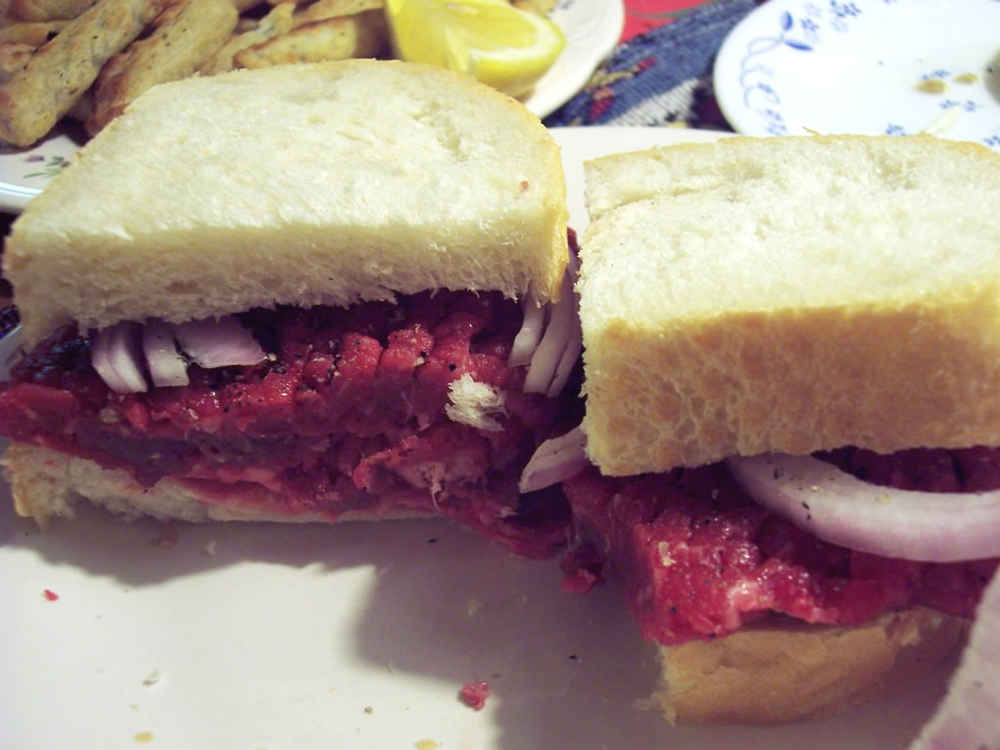 OK. That’s no good. It’s gotta be RYE bread. What is pictured above is sacrilegious.

But you get the idea.

Glenn’s is in Watertown, WI. They have a  gazillion styles of brats.  I recommend the pizza one.

In 2013 Glenn’s got national attention, and not in a good way. From CBS News:

But health officials said they’re (cannibal sandwiches) not safe, noting that more than a dozen people became ill with infections like E. coli after consuming them last holiday season.

The meat came from a Watertown market that later recalled more than 2,500 pounds of meat.

Cannibal sandwiches were tied to outbreaks in Wisconsin in 1972, 1978 and 1994. The appetizer, also called “tiger meat,” “steak tartare” or simply “ground beef,” is usually a simple dish of lean ground meat seasoned with salt and pepper on rye cocktail bread with sliced raw onion, said Milwaukee historian John Gurda, who served it at his 1977 wedding reception. Occasionally, a raw egg will be mixed with the meat.

Cannibal sandwiches have been a festive dish in German, Polish and other ethnic communities in the Milwaukee area since the 19th century, Gurda said. The 66-year-old said it was once common to see them at wedding receptions, meals following funerals and Christmas and New Year’s Eve parties. The dish has become less common in recent years with greater awareness of the risks of uncooked meat and fewer people eating beef, but Gurda said he still runs into it.

“It’s like a coarse pate and when you put the onions on, there’s a crunch as well and that kind of cuts the softness,” he said.

Keith Meyer, who runs L&M Meats, a Kenosha butcher shop started by his father, recalled his German grandfather and other “old guys” gobbling the ground beef when he was growing up. With his grandfather gone, Meyer’s family no longer serves the dish, but the 57-year-old said, “It’s really not that bad, if you get by the texture of it.”

Carol Quest, director of the Watertown health department, said its investigation found no health or other violations at Glenn’s Market. It’s hard to say what happened to the meat once it left the store, she said.

“The big message is that people need to cook their food properly and make sure they’re taking temperatures of their meat,” Quest said.

Symptoms of an E. coli infection include stomach cramps and diarrhea. It can lead to kidney failure, particularly in the elderly, children and people with weak immune systems.

And now a new study that raw meat diets pose a risk to both animals and humans.

It’s risky, experts found, to feed pets raw meat instead of  dry or canned pet foods.A team of researchers based in The Netherlands say these diets may be contaminated with bacteria and parasites, and could harm both animal and human health.

Why is this important? Feeding raw meat to companion animals has become increasingly popular all around the globe.

Why else is that important?

Contamination of  raw meat with bacteria and parasites can pass between animals and humans.

“Despite the relatively low sample size of frozen products in our study, it is clear that commercial RMBDs may be contaminated with a variety of zoonotic bacterial and parasitic pathogens that may be a possible source of bacterial infections in pet animals and if transmitted pose a risk for human beings,” say the researchers.

Warnings and handling instructions should be included on product labels and/or packages, they advise.

Would any such findings or warnings work?

On the menu as a starter:

I doubt Joe Bartolotta will remove that item anytime soon.

And because consumers consider it a festive and celebratory combination I’m thinking they’ll keep eating.

Me, too, as long as there’s plenty of salt and pepper to go along.

How restaurants mine your personal data to get a competitive edge