The many who’ve descended upon California are still there, but the ranks are beginning to thin.

As The Summer of Love winds down, an unlikely group has been moving up the charts.

Much of the popular music of the incredibly history-making period has been about love, love, and more love, and getting high, and the overwhelming law of order had actually been dictated a year earlier in 1966 by the Mamas and the Papas:

The Summer of Love. The Beatles and The Doors and Jefferson Airplane and Jimi Hendrix and Janis Joplin and…

Are you kidding me?

As Labor Day was approaching in 1967 The Monkees were making their first foray into psychedelia.

The composers were the immortals Gerry Goffin and Carole King who wrote it about Pleasant Valley Way in West Orange, New Jersey, where they lived at the time.

The Monkees (did they play their own instruments or didn’t they?) did play on this one – for the most part. Peter Tork played piano and Mike Nesmith played the famous opening guitar riff. Chip Douglas, a former member of The Turtles played bass and came up with the guitar part, which was based on The Beatles “I Want to Tell You.” He taught it to Nesmith, who overdubbed it twice.

Guitarist Mike Nesmith and drummer Micky Dolenz handled the vocals on this track.

Those who loved the recording saw it is a harmless commentary on the simple life in happy suburbia.

Others who were more critical saw it as a rip on the much too complacent suburbia.

Michael Nesmith told a reporter they were all wrong, that the song was about a mental institution. I’m not buying that.

Here’s another “Sunday” song from the Summer of Love.

Spanky and Our Gang didn’t last too long in the music industry, about two years, but they had a few successful recordings.

The sunshine pop/folk rock band was led by vocalist Elaine “Spanky” McFarlane whose nickname came from her resemblance to “Spanky,” one of the members of the Our Gang comedies. 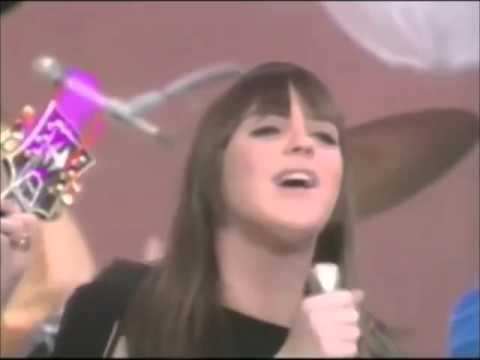 “Spanky” is on the left.

This 1967 hit was written by Terry Cashman and Gene Pistilli.  Cashman recalls that the  idea for the song came after Pistilli played a melody  for him in their office.

“Most simple rock and roll chord progressions in the key of G would be G to E minor to A minor to D,” said Cashman. “And Gene came in with a change which was instead of going from G to E minor, he went to E major, and instead of going to an A minor – the typical rock and roll kind of thing – he went to an A major, so it made it sound different. And when he played it for me, I started singing this melody to it. And you know, it made me think of a girlfriend that I had a few years before. We used to walk in the park on Sundays, and that whole story became the idea for the song because she left him, and the love affair was over, that Sunday, that special day would never be the same.”

The Mamas and the Papas were originally asked to record the song, but turned it down.  It went to #9 on the Billboard chart in the Summer of Love.

McFarlane is the only original member of the group left and still makes appearances.

Next week, our final installment in this series: The end of the Summer of Love.