Here’s a prelude to this week’s no-no from a previous installment.

Consider this: Already, a single Shake Shack location is worth $50 million, compared to $10 million for a Chipotle, or $3 million for McDonald’s.

And you probably won’t find it hard to believe that like so many incredible rags to riches stories this one began simply. Very simply.

In early 2014, Shake Shack’s Randy Garutti did an interview with Forbes.com about founder Danny Meyer and a napkin’s slice of the history of the restaurants.

You’ve got to understand that 14 years ago, Madison Square Park was in disrepair. There were drugs, rats, homelessness and it was not a nice park. You can’t imagine that today because if you go there now, it may be the most beautiful small park in New York. At the time, we had two restaurants right on the Park, Tabla and Eleven Madison Park. Danny helped create the Madison Square Park Conservancy and their first renewal project was an art exhibit. As part of this exhibit, we birthed a small New York hot dog cart out of the kitchen of Eleven Madison. But what happened was that we held the same standards of quality to our cart that we did in our restaurants, and people loved it. All of a sudden, 50 people lined up, 100 people lined up and the hot cart became this amazing crazy thing.

For three years, we ran the hot dog cart, never thinking beyond that. Then, the city was fielding proposals to fill a 400 square foot kiosk in the Park. On that day, Danny sat down and scribbled on the back of a napkin his vision of a modern version of a roadside burger stand. Not retro, not ‘50s music playing, but today’s version of what made that place great. All we ever wanted to do at Shake Shack was to have good people serving fresh food, and to sell a few hot dogs. We put the burger on the menu and the rest is history.

About that napkin. There’s more to the story, and yes, our eventual no-no.

The napkin, a photo of which was just published recently laid out Meyer’s thoughts about what would all be served. Since hot dogs were on the menu you just had to have a Chicago-style.

Oh, yeh. A thing of beauty.

You’ve got your all-beef dog.

A dash of celery salt

All served on a steamed poppy seed bun.

Uhh, but that’s not how Danny Meyer envisioned his Chicago-style dog. Let’s take a look at that famous napkin and see if you can spot the no-no.

Well, for one thing Meyer wanted to toss lettuce in there somewhere. But the most egregious vision he had of his Chicago-style dog was that it would include…

433 editions of Culinary no-no and here we go again. From hotdogchicagostyle.com:

The toppings are just as important as the Hot Dog itself. If you look at the required toppings for a Chicago Dog, you will notice that Ketchup is not listed among them. Ketchup is an ingredient frowned upon by Hot Dog aficionados. Although ketchup remains one of the most popular condiments on Hot Dogs, “properly made” Hot Dogs, like the Chicago Style, usually lack the condiment.

Those who consider themselves Hot Dog connoisseurs are often vehemently opposed to eating (or even witnessing) Hot Dogs with ketchup; they think the flavor of ketchup overpowers and destroys the taste of the Hot Dog instead of complementing it. Nowhere is this difference in opinion more apparent than in Chicago.

“You know what makes me really sick to my stomach? It’s watching you stuff your face with those Hot Dogs! Nobody – I mean nobody puts ketchup on a Hot Dog!”.  – This is a famous line from the movie Sudden Impact starring Clint Eastwood.

The National Hot Dog & Sausage Council, in its recommendations for proper Hot Dog Etiquette capitulate only slightly to the public’s general regard for ketchup, saying “Don’t use ketchup on your hot dog after the age of 18.”

Then there’s this “Straight Dope” column published back in 1991 by the renowned Cecil Adams where we get even more serious.

So even an entrepreneur extraordinaire can blow it (maybe). In the end Danny Meyer’s Shack-cago dog is sans ketchup.
—Culinary no-no #434, August 2, 2015

This past Tuesday was…

Lots of ways to eat one.

But to reiterate, note the Chicago style.

Heinz went to Chicago to see if die-hard hot dogs sans ketchup fans could be persuaded to break their long-standing habits. 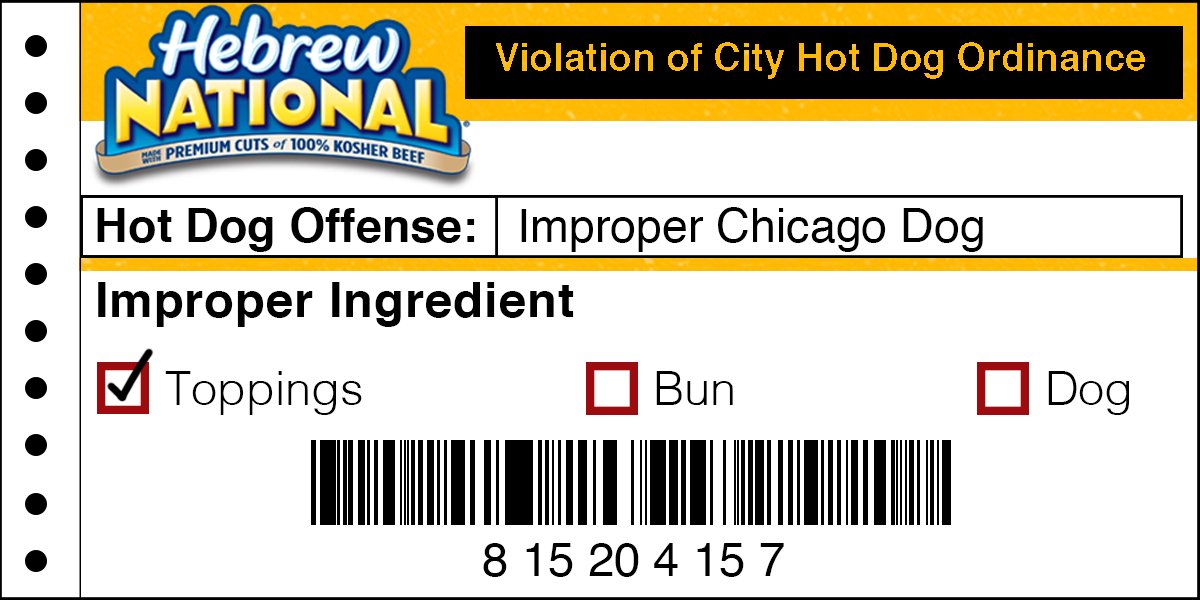 So was the experiment successful? Since it didn’t win over a majority of consumers, probably not.But was it clever marketing? Heinz manufactured a limited number of bottles of the fake stuff that were available only online. They completely sold out. So to answer the question, yes yes.

Pass the mustard and onions, please.

Grocery shopping is no longer a one-stop experience