We begin this week’s installment with a visit to a Milwaukee restaurant that’s more than 70 years old:

Earlier this year Milwaukee’s Five O’Clock Steakhouse at 24th and State was named the #1 steakhouse in Wisconsin by renowned culinary publication “Tasting Table.”

The restaurant gets rave reviews, like this one I found on-line:

“I have been to over 40 countries and have tried every type of steak on multiple continents, and still bring new people I meet here for the best steak they will ever have.”

But here’s an extremely notable thumbs down.

My friend, the late Dennis Getto was a very popular, widely-read restaurant critic for many years at the Milwaukee Journal and Milwaukee Journal Sentinel. Getto’s columns were always interesting and highly anticipated.

I met Getto when I worked at WTMJ Radio. He was a regular guest on another friend’s program, Gordon Hinkley.

Getto went to great lengths to keep his identity secret, wanting to have the same experience that any other diner would have. He often disguised his appearance, growing assorted beards, wearing awful wigs and even a cowboy hat.

He always made reservations under assumed names and paid in cash. Friends dining with Getto soon realized that he kept a small tape recorder in his shirt pocket, the better to discreetly dictate notes.

And Getto’s face never appeared on the newspaper page. But he did pose with a grocery bag over his head in promotional ads. Yet another classic showed only Getto’s green eyes peering through two Krispy Kreme doughnuts when the franchise hit the Milwaukee area.

Restaurateurs and readers might not have known the face, but they knew the name.

“I think that being anonymous made him really blend in with the people who live here,” Editor in Chief Martin Kaiser said. “It was like anyone else going out. He understood Wisconsin and Milwaukee and the dining experience. He was part of the fabric of the community.

“I’m not sure there was another reporter as beloved by his readers.”

To me and I’m sure many others, Getto’s word was gospel. That’s why I was stunned by a particular review.

Everyone I knew couldn’t say enough about the old Coerper’s Five O’Clock Club, now the Five O’Clock Steakhouse located at 24th and State. They drooled and still do over the perfectly exquisite slabs of beef swimming in natural juices, the size of a Brett Favre weapon.

I will never forget Getto’s scathing April 2003 review of one of the most popular steakhouses in town. Getto wrote of Coerper’s 5 O’Clock Club:

I’ve visited and reviewed Coerper’s many times and have always been put off by the place.

I dislike its loud, smoky atmosphere (numbers for orders are called over a loudspeaker; smokers are allowed at the bar and all tables), its ban on walk-ins (exceptions made, but who knows when?) and its cookie-cutter approach to grilled meats (they’re all covered with the same dark crust and set in the same dark meat juice).

Coerper’s sticks with an old-time Wisconsin tradition by making you sit down in the bar and order from there (presumably, while you also have a drink). If you are unlucky enough not to know the system, Jimmy will set you straight, pronto. I saw him bark at one clueless group of men who were milling around the hostess stand.

You are not required to ask permission to use the restrooms. If you do, be prepared to negotiate your way around a bottle of disinfectant bleach, a toilet brush and a plunger.

Most of the customers at Coerper’s come for the red meat, and especially the steaks. With options in town like Mr. B’s, the Chop House, Eddie Martini’s, Mo’s and Butch’s Old Casino Steak House, I won’t be joining them.

As much as I liked and respected my friend, I thought Getto’s review was unfair. A plunger in the restroom? Thank goodness it wasn’t in the kitchen.

The mere presence of the plunger seemed to taint Getto’s entire review. Once he saw that cleaning device, Coerper’s had a fork in it. They were done. Their reputation, the gargantuan steaks, the popularity didn’t matter.

Getto was turned off.

Whether you agreed or not with Getto, if you were in the restaurant business it had to serve as a waker-upper.  It’s not just what’s placed on a plate in front of the customer that’s important.

Here’s the deal. If patrons walked into any restaurant restroom today and found the cleanliness to be questionable, a whopping 9 out of 10 would automatically come to the conclusion that the kitchen was also dirty.

Here’s more on that finding and others. 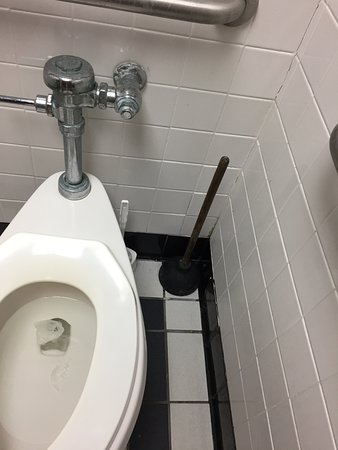 The wrath of grapes