“I have a dream that one day this nation will rise up and live out the true meaning of its creed: We hold these truths to be self-evident, that all men are created equal. I have a dream that my four little children will one day live in a nation where they will not be judged by the color of their skin but by the content of their character.”
Martin Luther King Jr. in his famous speech at the Lincoln Memorial in August 1963.

On more than one occasion when I was a regular panelist on Channel 10’s InterCHANGE I surmised that if alive today, King would oppose affirmative action. He would denounce racial quotas.

“I have a dream that my four little children will one day live in a nation where they will not be judged by the color of their skin but by the content of their character.”

That sounds to me like a perfect conservative value.

“Martin Luther King Jr. meets the very definition of an American conservative, that is, someone dedicated to preserving the gains of a liberal revolution.

After he was gone, a new black intelligentsia arose that knew not Martin. His would not be the name embroidered on the baseball caps of another generation. The legacy of Martin Luther King Jr. would give way to the frustrations of a Malcolm X, the demagoguery of a Louis Farrakhan, and the general hucksterism of the Al Sharptons and Jesse Jacksons.

You can tell a lot about an age by the heroes it chooses. While the Malcolms and Farrakhans come and go in favor, Martin Luther King Jr. remains the standard by which all other leaders are measured, and not just black leaders. That’s a hopeful sign.”

Given King’s famous remarks, it makes one wonder why so many liberals today relish playing the race card. Wouldn’t King find that offensive and insulting to minorities? 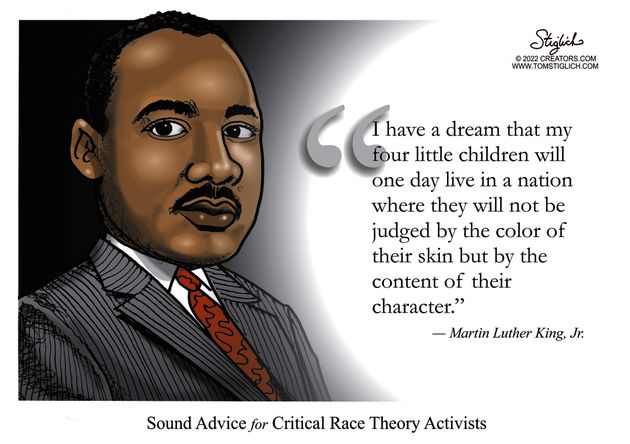