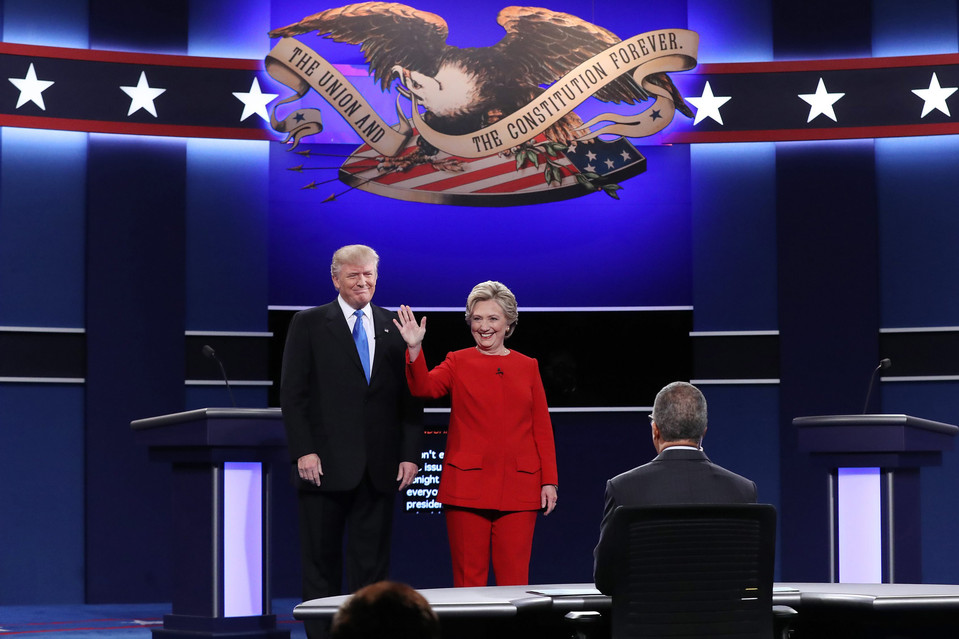 There was a great deal of attention on NBC’s Lester Holt coming into Monday night’s debate. I was not impressed.

How many times did Lester Holt interrupt Hillary Clinton?

How many times did Lester Holt interrupt Donald Trump?

Lester Holt, where were the questions on e-mails?

Lester Holt, where were the questions on Benghazi? Obamacare? Immigration?

Where were the questions on failure after failure overseas when Clinton was Secretary of State?

Somebody forgot to tell the moderator that he was supposed to moderate and not debate Donald Trump.  Lester Holt, of the Nobody But Clinton network, was clearly in the tank for Hillary Clinton. I suspect he was secretly auditioning to be her press secretary.  Just  tally the number of times Holt interrupted Trump and pressed him on follow up questions and then compare that number to Hillary’s. As we say in Dixie, Hillary got some home-cookin’.
Todd Starnes is the host of Fox News & Commentary – heard daily on 250+ radio stations

The ref not only made himself part of the game on Monday night, he ran up to the scrimmage line, then sacked the quarterback three times.

Arguing with Trump is Clinton’s job, not Holt’s.

For Holt to allow her to get away with saying, “It was a mistake” on her usage of email doesn’t cut it, not from a guy who was willing to hammer Trump on a remark like “I just don’t think she has a presidential look.”
Kyle Smith, New York Post

As he prepared for the crucial first presidential debate, Donald Trump knew moderator Lester Holt would bring up the birther issue. He knew Holt would raise Trump’s tax returns. And his old position on the Iraq war. None are among the voters’ top concerns, but it was eminently predictable that they would be part of the debate — not least because if Holt had not brought them up, Hillary Clinton would have.

But Trump might not have predicted that Holt would leave some equally, if not more, important topics untouched. There was Obamacare, currently veering towards crisis. Immigration, including a proposed wall along the U.S.-Mexico border. The Clinton Foundation. Benghazi. Certainly a moderator can’t cover everything, but those were some pretty big omissions.
Byron York, Washington Examiner

[A] plurality (46%) of likely U.S. voters believes most moderators will try to help Clinton in the upcoming debates. Only six percent (6%) think they will try to help Trump instead.
Rasmussen poll

“If I were Donald Trump I wouldn’t participate in another debate unless I was promised that the journalist would act like a journalist and not an incorrect, ignorant fact checker. The moderator would have to promise that there would be a moderator and not a fact checker and in two particular cases an enormously ignorant, completely misinformed fact checker. If you wonder why Donald Trump thinks that the press is a left-wing basically oriented group, Lester Holt proved it tonight.”
Rudy Giuliani

Trump was like an excitable dog running around the house, jumping on people and sending grandma’s heirloom vase crashing to the floor. Still, it was good enough to fight Hillary Clinton to a draw. Here’s why:

Clinton was calm, cool, and at times a little too smug for her own good. She went on the attack from the start, a recognition that her campaign has lost its footing and is in need of a jolt. But there is nothing you can tell the American people about Trump that they don’t already know. Clinton’s strategy of demonizing Trump isn’t working. She now trails Trump in key battleground states won by President Obama in 2012, and the national polling is tied.
Eric Fehrnstrom, Boston Globe

This is 2016, a year so weird, unsettled and unsettling, that even the spectacle of an unprepared and almost incoherent Trump, reeling from blow after blow from Democrat Hillary Clinton, may not be enough to slow him down.
Howard Fineman, Huffington Post

The first Clinton-Trump debate was roughly a draw — which is bad news for her, because she needs to turn this race around, and she failed.

Clinton was on the attack most of the night, with the marked help of moderator Lester Holt. But she didn’t score any body blows — nor remotely offer a rationale for her candidacy beyond he’s just too dangerous, a case she failed to make.

Trump wasted time on pointless defense on basically irrelevant issues — the birther stuff, his taxes and so on. But he didn’t come off as the maniac she needs him to be. New to this game, yes; too volatile, no.
New York Post Editorial Board

It’s over. Trump, the egoist, the racist, the narcissist, the liar, “won.” We all lost. His numbers will go up. She told the truth. So what.

Pro-Hillary gloaters doing end-zone dance again when still on 50-yd line. U MUST get it in your head TRUMP IS GONNA WIN and act accordingly!
Left wing activist and filmmaker Michael Moore on social media

One thought on “Lester Holt horrible in moderator role”